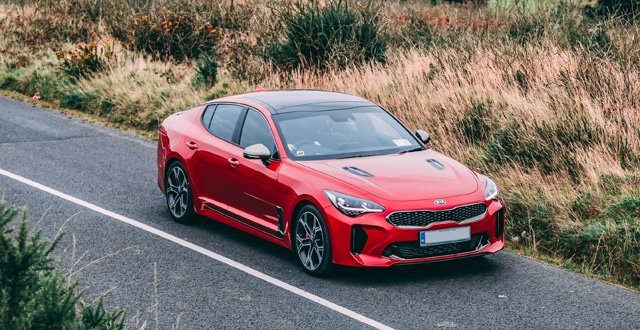 In the 1960s, Toyota and Nissan, or ‘Datsun’ as it was known, dipped their toes into the sports car market in the US, a move that would greatly improve their brand image. Now, some 50 years later, we have Korean marques attempting a similar strategy.

According to Kia’s Director of Marketing Mr David Hilbert, the company wants to leave adjectives like ‘low-value’, ‘small’ and ‘budget’ behind and move into the premium league, with Lexus, BMW and Jaguar, to name but a few. Kia’s Sportage and Sorento were the brand’s first foray into this class since the limited run Kia Elan of the mid-90s, and both crossover SUVs sold well internationally. However, Kia has now turned the dial up to 11 with its barnstorming gran turismo, the Stinger.

The Kia Stinger is a four-door, rear-wheel drive Korean muscle car that is brimming with high-tech toys — a statement car for someone who’s disillusioned with the current status quo in this segment, namely the Audi A5 Sportback and BMW 4 Series Gran Coupé. A person who really wants to step outside their comfort zone, without becoming a leather clad, dad-bod on a crotch-rocket.

There are two models on offer in Ireland: The 370bhp, twin-turbo V6, 3.3-litre Stinger GT, or the 200bhp 2.2 litre turbo-diesel GT Line, both of which come with an eight-speed automatic gearbox. The Stinger I had was the diesel version, in blue, with a terrific red leather interior and a spacious cabin, albeit a little tight for taller passengers in the back. It handled very well, possibly because it was developed at Nürburgring Nordschleife and has an electronically-adjustable MacPherson strut front suspension system.

The Stinger is a handsome brute and I think it was quite a head-turner, although I’m not too sure, because you can’t really see out of it. The rear window visibility is minimal, and the huge infotainment system leaves a miniscule portion of windscreen available between it and the rear-view mirror, which is accentuated by the angle of the windshield. However, you can, like a tank commander, turn on the multitude of cameras that surround the body to give you a 360-degree view around the car, so you can keep watch for kamikazes on iron horses and other such hazards.

The Stinger has a brilliant surround view monitor system that creates a bird’s-eye view of the car by stitching together images from all around the vehicle. This augmented reality view of the vehicle shows a moving image on the LCD display, along with parking and lane markings, curbs, and adjacent cars. It’s amazing for protecting your alloy wheels and stops you having to stick your head out the window to see parking lines.

The Stinger is big and comfortable, the kind of car you could happily and effortlessly drive very long distances in. It’s 4,830mm in length and 1,870mm wide, making it bigger than many sport sedans, and gives it a cargo capacity of 406 litres, allowing the Stinger’s boot to accommodate two full-size suitcases or a set of golf clubs.

The Stinger has plenty of safety tech designed to avoid or mitigate the effects of a collision. These include vehicle stability management, which ensures stability under braking and cornering, if it detects a loss of traction. The Stinger also boasts collision warning, lane-keeping and blind-spot assists, as well as ‘driver attention warning’ to combat distracted or drowsy driving. The Stinger’s passive safety is underpinned by the body structure’s high proportion of advanced high-strength steel, as well as seven standard airbags.

I purposely left it until now to mention the sting in the tail, so I could paint the car in the best light possible, because it drives well, looks great and I did like it. But the diesel starts at €53,895 and the petrol is €66,895. That’s right in Ford Mustang Ecoboost and Alfa Giulia Veloce territory, two cars I would preference over the Stinger. However, it does have one very big ace up its sleeve, which is Kia’s seven-year, 150,000-kilometre warranty.

I performed a survey online and 92 per cent of people polled said they wouldn’t spend €53,895 on a Kia, which makes me think that perhaps the Korean marque should take another leaf from its Japanese rivals and launch a luxury vehicle division like Toyota’s Lexus or Nissan’s Infinity. It’s definitely worth a test drive and is certainly something new, but unfortunately lacks the pedigree of its new rivals.