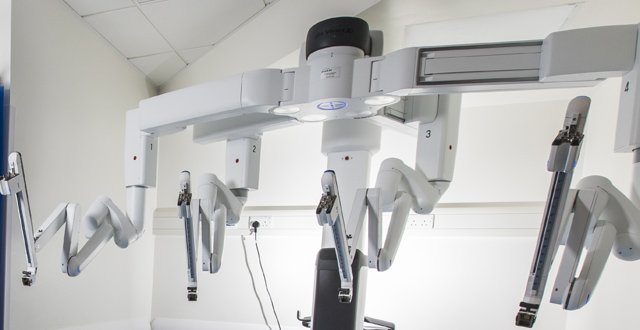 The private hospital says the patient has lost more than eight stone in weight since starting on its bariatric weight loss programme and that the patient’s wife underwent the same surgery three weeks later.

The patients, Alan and Deirdre Murphy, have seen many health benefits following their treatment, it added.

The da Vinci System is a robotic-assisted surgical device that the surgeon is fully in control of at all times. The da Vinci System gives surgeons enhanced vision, precision and control due to a 3D HD view inside the body and wristed instruments that bend and rotate with flexibility far greater than the human hand.

Potential patient benefits include a low complication rate, a shorter hospital stay and low levels of post-operative pain, the hospital outlined in a statement.

“There are potential benefits to the patient of reduced blood loss, less pain and quicker recovery,” said Mr Robb. “However, the benefits for the surgeon are very strong and include enhanced vision, precision, control and dexterity. The robotic technology allows the surgeon’s hand movements to be translated into smaller, precise movements of flexible and dextrous instruments inside the patient’s body,” he added.

The surgeon sits at a console controlling the robot, which has four multi-jointed arms to hold an endoscopic camera and instruments. A high-definition, magnified 3D image is projected via the operating console to the surgeon.  Theatre staff can also see the images on 2D theatre screens.

“The options offered to surgeons through technology are growing exponentially. As a high-tech hospital, our strategy is to have the newest technology, which allows our surgeons to advance their procedures with the smallest incisions and the best patient outcomes,” said Mr James O’Donoghue, CEO of Blackrock Clinic.

This is the first bariatric robotic surgery programme in Ireland and the fifth in the UK and Ireland, outlined Blackrock Clinic.

It produces similar health benefits to gastric bypass surgery with 60-70 per cent average estimated excess body weight loss. Patients can expect a two-to-three-day hospital stay and to return to work after about two weeks, stated the Clinic.

The gastric bypass procedure involves dividing the stomach and forming a small gastric pouch. The new gastric pouch is connected to varying lengths of the patient’s small intestine constructed into a Y-shaped limb (Roux-en-Y gastric bypass).

Gastric bypass surgery reduces portion sizes as well as gently limiting calorie absorption by bypassing a section of the intestine and these two mechanisms provide for enhanced weight loss.

Under current Irish insurance rules, to be eligible for bariatric surgery a patient should have a body mass index (BMI) over 45, or over 40 with weight-related medical conditions.

Current international guidelines stipulate a BMI of over 40 or over 35 with weight-related medical conditions (this guideline would apply to self-funding patients, advised Blackrock Clinic).

The da Vinci Xi is also used for gynaecology, urology, colorectal and thoracic procedures in the private hospital.