First seat at the table 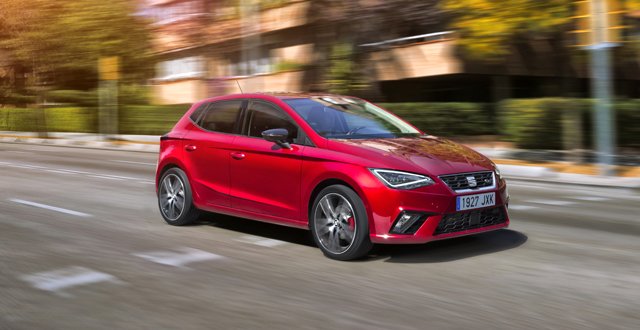 Usually rental cars tend to be abused and worked hard. Rental companies, by buying a large lot of cars, usually from certain manufacturers, let’s say, get lower spec cars at a good price and after a few years sell them on. If buying at auction they are often called “company cars” and rarely have the rental company name on them. For family holidays we tend to go to Lanzarote and are happy to get the “best value” car available. Interestingly, we can get a small car, fully insured, unlimited mileage (the island is the size of Co Louth, so where would you be going!) for less than €100 per week. At that price, you’d expect ‘rent a wreck’.

It came as a surprise when I went to arrange car hire and walked out to find a fresh SEAT Ibiza waiting for me with about 10,000km on the clock. Of course, being a Spanish island they favour the once Spanish-owned brand. Now it is owned by the Volkswagen group (the VAG group), which had a very talented designer called Walter De Silva. Means nothing to most of you, but if I mention he was responsible for turning Alfa around with their (still) beautiful 156 you’ll know where I’m coming from. Pity he could not do as much with quality control or Alfa would be a much more popular car now. He was head of styling for the VAG group and hence oversaw SEAT’s new image. He’s now retired and makes shoes for women, (yes it’s true).

Believe it or not, the Ibiza has been in production in various small forms for 33 years and is a vital car for SEAT in the competitive supermini segment.

The VAG group have modified a chassis, the MQB AO, for the Polo and Ibiza (and eventually the Fabia). The Ibiza has the chassis first, which allowed me to unofficially test it ahead of time.

Apparently torsional stiffness is up by 30 per cent, despite being longer in wheelbase and wider in track than its predecessor. Overall length is unchanged. I am informed that the car will have exceptional dynamic ride quality and comfort.

The Ibiza would be a sister car to the desirable VW Polo, yet bears a closer resemblance to other Seats than the VW, notably the Leon. There are mechanical similarities to the Skoda Fabia, but that’s where the resemblance ends.

Outside the styling looks good, nicely proportioned with its characteristic triangular headlights. Inside the SEAT’s seats also are similar to the VAG group products and I feel you tend to sit more on the German style of seat than in them, as you would with French and Italian chairs. Dashboard is functional and clear.

But what brings me to tell you about this car is its three cylinder engine. Being a petrol head, when it comes to engines, size does matter. To use an expression borrowed from some foolish Trump-voters, you can’t have enough cubic inches. And to me you can’t have enough cylinders. Even my motorbike has a six cylinder engine. But this Ibiza has a three cylinder turbocharged petrol engine and is very smooth. It even has a delightful throb when pushed at low revs. Now at 1.0 litres don’t expect any land speed record to be broken, yet it is capable of holding its own on hills and motorways. Occasional use of the gearbox may be required. What did surprise me was how slowly the fuel gauge moved. I had about 140km done, but the first light on the fuel stack had gone out and the trip computer was giving me a reading of 5.3 litres per 100k, which is about 53mpg in old money. The fuel tank had a potential range of about 700km. Now I will admit the car did not get my usual testing, with my current wife acting as co-pilot (and brake), but on what caning it got there is potential for her when driving to squeeze even more from the tank.

What most people don’t know, and I do because I’m older, is that Daihatsu first introduced a three cylinder petrol engine over 30 years ago. The Charade car was incredibly economical.  We owned one and nothing I could do would bring the fuel consumption below 40mpg. The only other thing it did as well was rust. It may as well have been made from sugar as it dissolved so quickly in the wet.

What impressed me was that this SEAT engine was as economical as a diesel, yet quieter, with a pleasant three cylinder throb when worked. When you’re looking at the 1.0 litre end of the market, you’re not looking at sports cars. The Ibiza is surprisingly good and seems to have moved the game on.