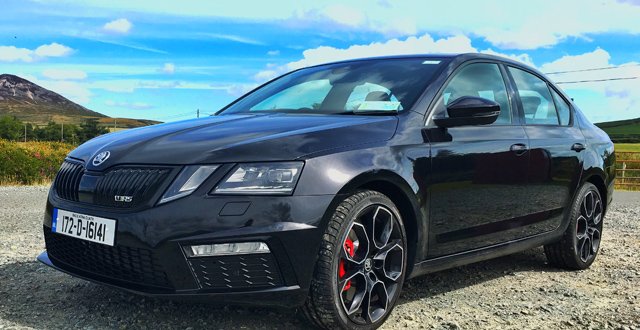 At the forefront of Skoda’s remarkable rebirth is their flagship sports saloon, the Octavia RS, a car that successfully exists on the thin line between price, practicality and performance. The handsome new-look Octavia RS has acres of interior space, plenty of power and an unbelievable bang-to-buck ratio.

The first time I put a Skoda Octavia RS through its paces was at the Speedworld track at Pachfurth in beautiful Austria. That day, we had the 184bhp diesel RS184 and the old 230bhp petrol model, as the barnstorming RS245 was nothing more than a rumour at the time. On the track, the difference between the petrol and diesel was quite profound.

The RS184 just didn’t have the adequate get-up-and-go on the track and left me wanting more, as keeping up with the local pro felt like an impossibility, until I took the petrol version out, which whipped around the course and stuck to the local driver like glue. Most test cars that day were diesel-powered with an automatic DSG gearbox, but I managed to get my paws on a manual petrol model, which I fell in love with.

I realise that we don’t live in huts in the middle of the Nurburgring, so reviewing a car based on your experience throttling it around a track is a little skewed. Luckily, Skoda were good enough to loan me two of their RS model Octavias in Ireland: The popular diesel  RS184 and the all-new petrol-powered 245bhp, RS245, both of which came in front-wheel drive and were packed with an arsenal of extras.

When I first tested in the RS184 in Austria, I thought it was a little damp compared to its petrol brother, but off the track, on real roads with speed limits, I have to report that it has plenty of power to promptly get you where you need to go. In the real world, the RS184 is terrific to live with; its DSG gearbox is snappy and responsive and the motor delivers plenty of power for day-to-day life. The turbo diesel engine isn’t invasively loud or irritatingly rural-sounding and manages to deliver the power quite effectively through the rev range. It was painted in Race Blue, had 18-inch alloy wheels, an Alcantara-trimmed sports seats, parking sensors, a reversing camera and a 9.2” Columbus sat nav and infotainment system. It also boasted in-car WiFi, smartphone-mirroring software, an electric panoramic sunroof, something called the ‘RS Xtreme challenge pack’ and an umbrella holder under the passenger seat. The 184bhp Octavia RS I drove cost €37,830 and for that, you get a hell of a lot of car.

The following week, I received the latest petrol model, which seems to have dipped its toe into muscle-car territory, as it brandishes 245bhp and 370Nm of torque. As I nestled into the familiar RS-embossed bucket seats, the first difference I noticed was the aggressive growl of the petrol engine as I turned the key. Outside, it had black 19-inch wheels with red brake callipers and the body was finished in metallic black. It also had a sports exhaust that allowed its turbo-charged four-cylinder motor to bellow like a Czech warrior. I love manual cars and as they disappear, I’ve become even more reticent to admit that the DSG automatic set-ups are good. But they are. Changing gear at speed in the RS245 was a pantomime of noise and power, as the high-pressure turbo glued me to the seat as it shot me down the road.

I’ve been singing Skoda’s praises for years, but I’ve never driven one that was a genuine ‘head-turner’ before the RS245. People repeatedly asked what it was and offered up the same confused look when I disclosed its brand. However, if I can stop gushing about the RS245 model for a moment, I must admit that the RS184 is a great car at a brilliant price and is powerful enough for a fun life.

In 2016, 10 per cent of all Octavias sold in Ireland were the RS model — 470, to be exact — and of that, only 4 per cent, or 16, were the petrol version. However, it would be remiss of me if I didn’t mention that the EU is looking into the sales of diesel cars and there are rumours on the street that taxes may increase on the black stuff, so maybe the petrol engine is the safer bet.

The build quality is what you would expect from any vehicle borne of the Volkswagen Audi Group, although I must mention that the passenger side-door speaker was struggling with heavy bass on the RS184, so if you’re getting a new RS, be sure to ask about an upgraded sound system.

The Octavia RS comes with cup holders in the fold-down section of the back seats, bottle holders in the doors, cup holders in the front and a storage bin in front of the gearstick.  I only tested the saloon models, which have 568 litres of space with the rear seats up and 1,558l with the back folded down, but Skoda does offer an estate RS with way more space. The cabin is well equipped with all the mod cons we’ve come to expect from Skoda and they even have a terrific little gadget to help you open a drinks bottle one-handed, something I hadn’t realised I needed in my life until now. The 9.2” Columbus Navigation and Infotainment system is simple to use and nicely laid-out and the RS184 achieves fuel economy figures of 4.9l/100km (58mpg), while the RS245 gets 6.4l/100km (44mpg).

Some of Skoda’s German rivals and relations would charge far more than €42,765 for 245bhp and some would even needlessly crank-up the Co2, meaning you have to cross Revenue’s grubby paw with more than the €390 annual road tax the RS245 would cost you.

All in all, if you want a fast, good-looking European sports saloon with acres of space and terrific build quality, I would firmly advise considering the Skoda Octavia RS.