Clean bill of health for the ‘Spanish patient’ 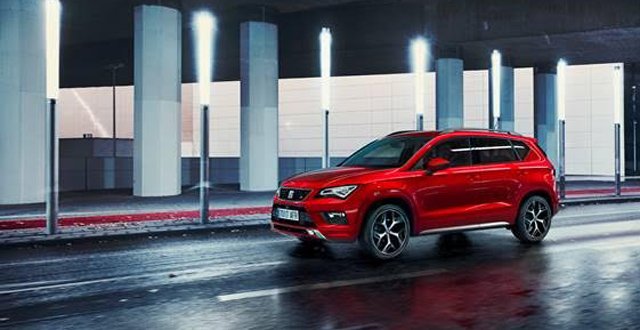 Some SUVs can feel a little cumbersome around town, like a lumberjack stuffed into an ill-fitting business suit, but this isn’t the case with the SEAT Ateca. Yes, it’s big enough to fill full with kids, dogs and shopping, but it’s also nimble enough to get around a multi-storey car park without making you sweat and curse. It doesn’t feel in any way like a repurposed commercial vehicle and I was very impressed with the quality of finish throughout and the layout of the large 8-inch colour touchscreen system.

Following in the footsteps of Volkswagen’s astounding success revitalising Skoda comes the SEAT rebirth. The marque, once referred to internally as the Spanish Patient because of its inability to make any money, has seen its fortunes shift to the tune of a €137 million profit between January and September of last year. SEATs of old were square, unattractive Euroboxes, which were seen as the ‘poor man’s Volkswagen’, however, the new wave of cars being produced by the Spanish company fly in the face of any of these preconceived notions.

SEAT has an extensive array of cars on offer in Ireland, ranging from affordable city runabouts, like the €11,000 Mii, to the tremendous Golf GTI hunting, and 300bhp SEAT Leon CUPRA hot hatchback. My test car this week, however, was a little more family-orientated, though still quite sporty. The SEAT Ateca FR is a rather spritely, well put together SUV, which is part of SEAT’s new Cupra and FR hardcore range. The SUV boasted a terrific 2.0 litre 190bhp petrol engine, which used 7.0l/100km, while producing 159g/km of CO<sup>2</sup>, making its road tax €570 a year. The Ateca FR that I had was overflowing with bells and whistles, like lights that projected SEAT onto the road when I opened the car door, a very sporty interior, with Alcantara seats and a rather large 8-inch touch screen media system. This SUV was top of the range and felt like it; the plastics and trim had a quality, well-assembled feel and the sporty seats were comfortable and supportive.

Plonking yourself into Alcantara sports seats in an SUV feels a little perverse at first, but the sporty look, including spoiler and tinted rear windows, mixed with the performance, promptly dispel any qualms you might have about the car. Volkswagen have not just revitalised SEAT, they’ve clearly given their Spanish Patient an intra-cardiac injection, shooting not just life, but a hit of adrenalin through its veins.

Back when we thought that diesel was the way forward, the notion of having a petrol-powered SUV was extravagant, bourgeois madness. This was a time when a 1.6 litre petrol engine was a brutish muscle car, flying in the face of the supposedly environmentally friendly, albeit NADPH oxidase (NOX) spewing, diesel hatchback.

In this brave new world we live in, affordable brands like SEAT are now offering a wide variety of petrol engines across their fleet, including SUVs. For the Ateca, SEAT have an 115hp 1.0 litre Eco option, which costs a mere €25,130. They are also offering a 150hp 1.4 litre petrol, which starts at €28,730. The 2.0 litre petrol engine that powered the Alteca I was driving was quiet, frugal and had plenty of power. The car was painted in beautiful metallic black and boasted 19-inch alloy wheels, Alcantara seats, two zone air conditioning, multicolour LED Interior Illumination, rain and light sensors and had a leather sports steering wheel. This fully loaded 2.0 litre petrol, 190hp, automatic, four wheel drive FR model cost €40,149. SEAT also offer a range of traditional diesel engines, with the 1.6 litre 115hp starting at €26,855, working all the way up to the top of the line 2.0 litre TDI Ateca FR, costing €39,035.

The Ateca FR is good looking, exciting to drive and competitively priced compared to its Volkswagen-Audi Group (VAG) counterparts. Well worth investigating if you’re looking for something a little different.