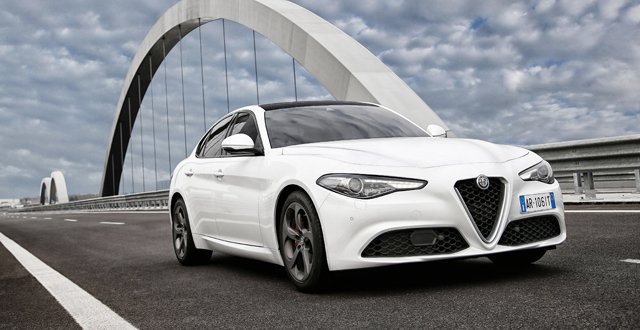 After more than a decade of sub-par Alfa Romeos, it would appear the Italians have finally got their ‘secret sauce’ right again. We’ve all heard motoring journalists pine for Alfas of old, and rightly so, because there was a time when owning one was something to be proud of. Having spent a week with the Giulia, I’m confident in saying the good times are back.

I was recently in Manhattan and saw a line of the full-fat, 2.9-litre V6, bi-turbo, 510hp Giulia Quadrifoglios parked outside a restaurant in Little Italy. All of them had New Jersey registration plates and according to my tour guide, who was an ex-cop, they belonged to exactly who you’d imagine they belonged to. So just to get this piece off in the right direction, the Alfa Romeo Giulia is so good, the mafia are buying them in bulk.

The model I had was the 150hp Super Sport with the 2.2-litre JTD diesel engine. I know that a diesel engine has no place in a car this poised and beautiful, but I must honestly admit that it was great, quiet and had plenty of torque. It felt like an event every time I sat behind the wheel of this car, especially when accented by my wonderfully over-the-top, red leather driving gloves, a perfect combo, if only the engine note matched the rest of the ambiance.

The diesel Super Sport gets from 0-100kph in 8.2 seconds; its average combined fuel consumption is 4.2l per 100km; and it produces 109g/km of co2, putting its road tax at a thrifty €190. The eight-speed automatic gearbox is terrific for long commutes and the reactive DSG set-up is another great feature.

Not only is this car beautiful and glorious to drive, but it also feels well put-together. You may scoff at that notion after 20 years of poor build-quality propaganda, but it’s true — this felt like a premium product, definitely up to the exacting standards of your average <strong><em>Medical Independent</em></strong> (<strong><em>MI</em></strong>) reader.

Inside the car, behind the leather, multi-function steering wheel were the most stunning set of aluminium gearshift paddles I’ve ever seen. The attention to detail and style throughout the Giulia is so wonderful and such a breath of fresh air, especially when compared to Germans in the same price category.

The Giulia’s rapid, razor-sharp handling came as a shock at first; it can change direction like a fighter jet, which can be a little jarring when you first get behind the wheel. However, after just a few minutes you’ll get used to it and changing lane will promptly become your favourite activity. It must be mentioned that this is the first four-door Alfa Romeo in 26 years to feature a longitudinal rear-wheel drive platform, thus the amazing handling that harks back to Alfas of old.

Next up is the model I would buy with my own money and is also the second-highest trim level. The Veloce comes with a 2.0-litre petrol engine and produces 157-160g km/co2, which costs €570 a year in road tax, all while putting down a rampant 280hp. Finally comes the big-daddy Quadrifoglio, with its Ferrari-designed V6 engine and €105,135 price tag. A car not for a light wallet or a faint heart.

The Giulia I drove was amazing and if it had been the Veloce, instead of the Super Sport, it would certainly have been the best car I’ve driven this year. Drop what you’re doing and buy one of these, then send your email of thanks to <strong><em>MI</em></strong> with ‘You have changed my life’ in the subject line.

0 responses to “An Italian stallion”