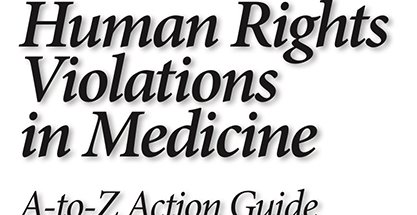 The British Medical Association’s Medicine Betrayed: The Participation of Doctors in Human Rights Abuses (1992) is a reminder that no individual, or group, is immune to being cruel to others. So, on receipt of Dr Pamela Wible’s Human Rights Violations in Medicine (2019), I expected another catalogue of medical misdemeanours. I was mistaken.

This describes human rights violations of medics in medicine, especially America, and had I paid attention to the strapline – “A-to-Z Action Guide” – I might have anticipated that phrases like “Food and Water Deprivation”, “Punishment when Sick”, and “Sleep Deprivation”, which appear on the front cover, are not top tips on how to make a patient’s stay in hospital an agonising one, but a few of the ways that physicians can suffer, driving some to suicide.

Wible notes at the outset that “[s]uicide is an occupational hazard for medical students and physicians”. This is bad news for physicians and their patients. Luckily, my medical records are thinner than a biro user’s manual, but it’s likely that I’ll be a patient one day and I want my physicians cheerfully devoted and ready to diagnose anything from alopecia to zygomycosis. I don’t want them to fear harassment, bullying, sexism or, as Wible puts it, karÕshi, which is Japanese for “physician death by overwork”.

Billed on the cover as “The Ultimate Manual for Physician & Medical Student Self-Defense”, each of the 40 chapters – from anti-Assembly to zombification – gives a definition of the topic, provides examples and finishes with a “Take Action Now” section that includes a list of Wible’s remedies, with blank pages for the reader to document how their human rights have been violated. It is only by asserting physicians’ human rights, especially those enshrined in the 1948 Universal Declaration of Human Rights (UDHR), contends Wible, that the threat of physician suicide can be addressed meaningfully.

Wible observes that “[t]hose who control our language determine our destiny”, dismissing “physician burnout” as a misnomer and calling it “a victim-blaming term that obscures the truth and distracts us from the real epidemic – physician suicide – fuelled by human rights violations in medicine”. Would Hannan et al agree? In their 2017 paper – “Burnout and stress amongst interns in Irish hospitals: Contributing factors and potential solutions” – published in the Irish Journal of Medical Science, we learn that “burnout” was first used in 1974 by American psychologist Herbert Freudenberger, who defined it “as a state of mental and physical exhaustion related to caregiving activities and went on to describe three key symptoms. These are: Emotional exhaustion, depersonalisation (or feeling distanced and detached from work) and a sense of low personal accomplishment leading to decreased effectiveness at work.”

But such definitions, argues Wible, deflect attention from a medical system that perpetrates abuse “while labelling physician victims defective … [and] appointing chief wellness officers to enforce wellness on the abused”. I can appreciate Wible’s point, especially when studies contrast “grit” with “burnout”. For example, Halliday et al, consider “Grit and burnout in UK doctors: A cross-sectional study across specialties and stages of training” in the Postgraduate Medical Journal (2017, 93: 389), with grit “characterised by the ability to persevere during difficulties and maintain a sustained effort over an extended period of time”. Their contention that “[a]s a high level of grit is associated with less burnout, interventions to improve grit through resilience training should be examined”, invites the inference that if only those with burnout could be a bit grittier, everything would be fine.

Wible adduces evidence to show that this type of approach is not fine. But nor is her reliance on the UDHR, even though it has been translated into 350 languages and is one of the world’s ethical lynchpins.

It seems to me that our relationship with, and understanding of, human rights is flawed. For example, in A Matter of Principle: Humanitarian Arguments for War in Iraq (2005) Thomas Cushman considers the invasion justified – correctly, in my view – on a human rights basis “as embodied in the [UDHR]”, but notes: “This body of moral principles was ignored by the United Nations Security Council in the case of the Iraqi people in favour of adherence to statutory international law.”

Further, the concept of a right is essentially a legal one and Wible recommends physicians to recruit attorneys in certain cases. So it’s worth noting what Prof Dinah Shelton writes in her introduction to the 3rd edition of Remedies in International Human Rights Law (2015): “For all its revolutionary advances, however, human rights law has yet to develop a coherent theory or consistent practice of remedies for victims of human rights violations.” And Spencer and Spencer in Human Rights (2004) cite Shelton quoting a former judge of the European Court of Human Rights who commented privately: “We have no principles,” to which another judge replies: “We have principles, we just don’t apply them.”

Dr Wible’s motivation and ardent advocacy of her cause are apparent in this forcefully written book. Whether her emphasis on human rights is the most effective way to address physician suicide is open to debate.