Caring for the causalities of war 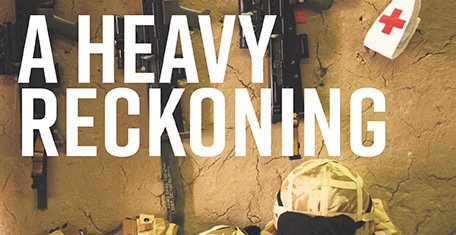 In wars around 1900, 10 soldiers died compared to one civilian. By 2000, the stats had been reversed, with one soldier dying compared to 10 civilians. ‘Collateral damage’ became the explanatory term for this eventuality. Additionally, in the average war (if there is one), 10 soldiers are injured for every one soldier who dies. This book is about what happens to those seriously wounded who somehow do not die on the battlefield.

A Heavy Reckoning is written by a unique person, Dr Emily Mayhew. She is clearly a good listener, good learner, good transcriber, and good interpreter.  She is a tough cookie, beloved of diaries and an excellent recounter.  Soldier Magazine awarded her ‘Book of the Year’ for 2018. She focuses on the late 20th and early 21st Centuries in Iraq and Afghanistan, with hark-backs to the World War I 1914-1918.

“I study the history of severe casualty in wartime and its consequences for unexpected survivors.” There is much about IEDs (Improvised Explosive Devices) and blast injuries and unfortunate amputees of one-to-three limbs. Blast injury requires extreme resuscitation and rehabilitation.  The price is life now, less life and of a poorer quality later.  Her book was commissioned by Wellcome in 2014 and published in paperback in 2018.

Dr Mayhew has been at the coalface of casualty medicine, blood loss, torsos and limbs injured by shrapnel, screaming, shattered bodies and minds, mired in dirt, death and disaster. Severe injury demands extreme resuscitation at site, in transit, in Chinook helicopter, at base (Bastion, Afghanistan) and aboard the amazing Globemaster aircraft to Birmingham. Dr Mayhew goes back to World War I (WWI), telling us that the finest primary sources she has worked with are the soldiers’ hand-written diaries. She encourages her current survivors to do likewise.

Mark Ormrod is the star of this book, getting six chapters of coverage detailing his trials and tribulations. Ormrod is the first British triple-amputee to survive an IED avulsive blast injury and has written one of the best memoirs of such casualty — Man Down.

Mayhew uses Ormrod’s individual personal story of awful debility, prolonged recovery, adaptation, and resignation. Ormrod demonstrates remarkable drive and ambition to overcome his losses and asserts that any amputee has to be a fit, resourceful athlete. “The way I look after my prosthetic limbs is the same as the way I used to look after my rifle.” Amputation is part of, but not entirely the cause of, the blighting of lives by severe casualty in modern wars.

The British have been involved in blast injury research for over a century at Imperial College. WW1 produced 41,000 amputee survivors. Severe injury induces an inflammatory storm and sepsis is a significant cause of postoperative death.

The blast injury impact produces a pressure wave, which can burst ear drums, perforate the gut, damage the lungs and scar the brain.  The severely-wounded body becomes hypermetabolic, hyperglycaemic, hyperlactaemic with heterotopic ossification and racked by physical, neuropathic and overwhelming psychological pain.

The central role in care is teamwork and speed. Self-aid (soldiers who carry morphine self-injections), ‘buddy aid’, a team-trained medic and a combat medical technician — an interlocking system of care. Next comes MERT (Medical Emergency Response Team), emergency medical doctors and anaesthetists working in a Chinook. As many medics as possible ‘surround and save’ in the first hour post-trauma. And it works — 92 per cent of combatants survived with extreme resuscitation and skills after severe injury.

Then back to base at Bastion, to the intensive therapy unit. CCAST (Critical Care Air Support) comes with a fully-equipped Globemaster aircraft transporting the most seriously injured back to Birmingham, UK, within 24 hours.

Pain and its self-relief are central to acute critical care, as well as infusions of fluid, blood, plasma and emergency surgery.   Their philosophy is to stop pain in its tracks from the outset. Resuscitation, surgery, imaging plus transfusion occur almost at once.   Another maxim is: “Calmness saves and panic kills.”  Making the call to quit is difficult for highly-trained and motivated teams of medics. Dr Mayhew, who is a staunch believer in written diaries, has witnessed and recorded all this and writes with urgency, empathy and astute observation.

Postoperative pain, post-amputation pain, inflammation pain, continual pain, phantom pain, neuropathic pain and psychic  pain all are accompanied by grief of loss of limb(s), loss of mobility, loss of stature. The book is not called A Heavy Reckoning for nothing.

There follows a long recovery and rehabilitation programme of prostheses, sockets and stumps, rigorous physiotherapy and on-going pain.  I think that a few diagrams or illustrations would have helped our appreciation of stumps, sockets and science. There is, at times, too much intimate descriptive detail.  Minor cavils about an outstanding book.

But they are a tough lot, as shown by their performances in the Invictus Games; resilient, ambitious, extraordinarily fit and inherently competitive. The book is a testament and tribute to the teamwork of emergency medicine specialists, anaesthetists, orthopaedic and plastic surgeons, intensivists, nurses, physios, occupational therapists, orthoptists and will be of interest to anyone in the trauma team.