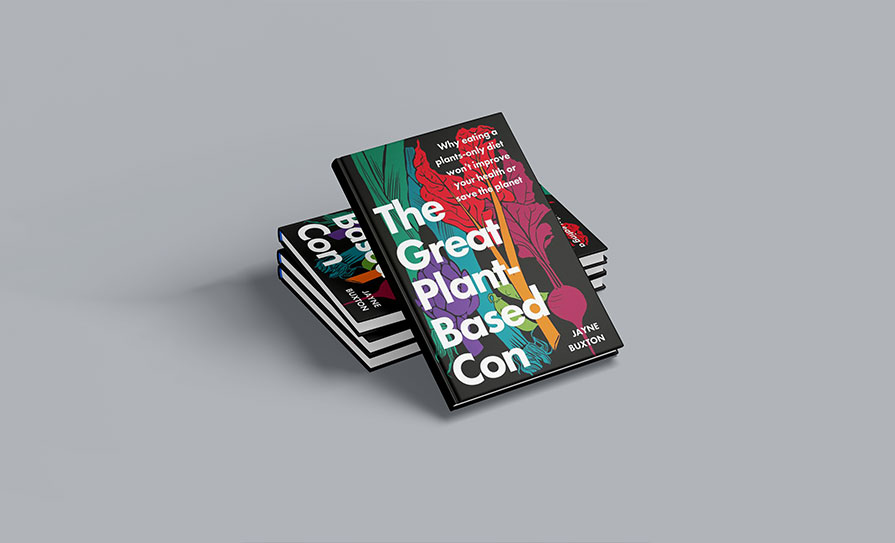 Title: The Great Plant-Based Con: Why eating a plants-only diet won’t improve your health or save the planet.

Pushkin described criticism as “the science of discovering beauty and shortcomings in works of art”; but it’s equally the art of discovering beauty and shortcomings in works of science. Thus, criticism enriches a civilised society. In which context, those disagreeing with this book’s findings should refute them – not merely repudiate – while acknowledging three points. First, as Matthew Arnold explained in The Function of Criticism at the Present Time (1865), criticism is the exercise of curiosity, obeying “an instinct prompting it to try to know the best that is known and thought in the world, irrespectively [sic] of practice, politics, and everything of the kind…”. Second, criticism differs from hurling insults such as the following – and worse – directed at Jayne Buxton: “You disgust me spreading false information so confidently. A true demon of a human being.” Third, criticism is more than tweeting 280 characters freighted with anger and exclamation marks.

The Great Plant-Based Con is a fine piece of evidence-based work, challenging the ideology that a global shift to a plant-based diet benefits humans, animals, and the planet. Armed with 1,463 references and 492 pages of well-copyedited text, Buxton topples the claims of those who demonise meat and other nutrient-dense animal-source foods.

At the outset the author explains that she is not anti-plant but, rather, supports the view “that plant and animal foods work synergistically to generate maximum nutritional benefits for human health”. The book comprises four parts: (1) Are plant-based diets better for your health? (2) Will plant-based diets save the planet? (3) Who is advocating for plant-based diet, and why? (4) How should we eat?

Part one includes an account of how Ancel Keys’s chilly eminence championed the now-discredited diet-heart hypothesis, stoking the public’s fear of cholesterol and healthy fat. But why so few dissenters among “many hundreds of doctors and researchers who agree that the diet-heart-cholesterol hypothesis is bunk”? Buxton speculates that “health agencies have invested money in, and staked reputations on the diet-heart hypothesis and the ensuing anti-fat, anti-cholesterol messaging, and they cannot change their tune without losing face.” With insulin resistance fuelling type 2 diabetes (T2D) and obesity, Buxton cites GPs, such as UK-based Dr David Unwin, whose practical application of a low-carbohydrate approach “has achieved drug-free remission in 46 per cent of his patients with T2D, and normal blood sugar levels for 93 per cent of pre-diabetic patients…” while saving money. And Buxton further undermines the f lawed evidence-base purporting to demonstrate a link between red meat consumption and cancer; explains how the five-a-day fruit and veg slogan was a marketing ploy; and highlights the nutritional deficiencies of the EAT-Lancet, Eatwell Guide, and other “variations on a plant-based theme”.

In part two Buxton considers, inter alia, “the truth about carbon dioxide, methane, and all those cow burps;” draws soil-related biochemical and biological concepts into a comprehensive and comprehensible narrative explaining the benefits of regenerative agriculture and nutrient-rich animal-sourced food; and shows how these strands can be sustainably incorporated into a planet-friendly strategy. The Devenish Lands, Dowth, Co Meath is cited as an example, with “peer-reviewed studies… [showing]… that Dowth currently sequesters 665 tonnes of carbon dioxide equivalents per year”.

Francis Wheen observed in his How Mumbo-Jumbo Conquered the World (2004), that “[t]he sleep of reason brings forth monsters”, a line that occurred to me while reading part three, which includes a chapter detailing the rise and dietary inf luence of the Seventh Day Adventists (SDA), whose crisp financial stewardship and commercial nous invite the inference that the glorification of a god may not always be the sole focus of its votaries when there are grains and cereals to be sold. Buxton acknowledges Belinda Fettke’s work in tracing the intricate web of the SDA’s activities, which includes ownership of Sanitarium, Australia’s largest cereal maker. One could speculate that some business-minded SDA members perhaps offered up sotto voce hosannas on hearing that in 2014 Belinda Fettke’s husband – orthopaedic surgeon Dr Gary Fettke – had been reported by a hospital dietitian to the Australian Health Practitioner Regulation Agency for encouraging his patients to reduce their sugar intake. In 2018 Fettke was cleared of all charges and his ordeal resonates with that of Prof Tim Noakes – a world leader in sports science and human nutrition – who, between 2015 and 2017, was tried for professional misconduct by the Health Professions Council of South Africa after a dietitian reported him for tweeting the benefits of low-carbohydrate/high-fat diets. Noakes won. Part three also “follows the money” into the world of plant-based business and those behind the EAT-Lancet Commission come under Buxton’s critical gaze.

Part four argues for pasture-fed ruminant farming over industrial systems, why there should be a return to unprocessed real food, and is essentially a welcome appeal for a return to nutritional common sense.

It’s only a matter of time before some medics/dietitians will be arraigned to face litigious diabetic patients wanting to know why so-called experts encouraged the guideline-recommended consumption of high-carb, low-fat, plant-based diets when their patients were carbohydrate-intolerant. When that happens, some of the evidence cited in this book may be adduced by the prosecution… who’ll win.