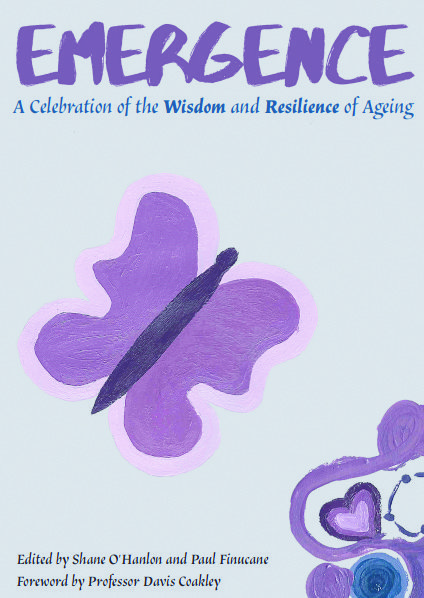 Geriatricians always make me uneasy; the uneasiness being a mixture of respect and awe. They know too much, not just the scientific stuff, they also seem to know a lot about the past, coolly assess the present and,this being the spooky bit, divine the future.

It is not enough to cure the presenting complaint and ship the patient out. They see what the patient has been, what they could have been, where they are now and what will become of them, standing with a chart in their hands and a far away expression in their eyes.

Consultant Geriatricians Prof Shane O’Hanlon and Prof Paul Finucane have assembled an anthology of poetry and prose called Emergence: A Celebration of the Wisdom and Resilience of Ageing. Irish geriatricians have been asked to pick the pieces and all proceeds go to age-related charities.
“Resilience” they say in the introduction, “generates the ability not only to survive the chaos, but to find meaning, satisfaction, and causes for celebration in life and in living.

As health professionals who encounter older people every day, we are regularly inspired by the stories that they share with us and by their wisdom, patience and tolerance. We’ve witnessed their times of sadness, loss, and pain and have been further inspired by daily examples.”

These witnesses, the good doctors who have chosen to spend their working lives among the silver haired and hold the wrinkled hand, have touched the lives of just about everybody on this island.

If surgeons are the soldiers of the medical profession, swinging into battle with knife and nerve, geriatricians are the gardeners, periodically straightening up and taking the long view, seeing what is doing well, what needs attention and what, sadly, will not do at all.

The collection starts off with President Michael D Higgins, who age has not withered and custom has only freshened his infinite variety. His poem contains the line “later, when words were required/To intervene at the opening of Art Exhibitions” which brought me straight back to when I was auditor of the Arts society in University College Galway and I would introduce Michael D, as if he needed introduction, at various launches.

He was an inspired exhibition opener and was always nice to us students. In those days an interest in the Arts was viewed with suspicion by the medical authorities. It was long before anybody talked about humanities.
“In medicine today diagnosis and treatment are often determined using sophisticated technology, largely replacing the time-honoured tradition of history-taking and physical examination, and as a result the interaction between the doctor and the patient has been reduced.

The humanities cultivate analytical thinking and complement and enrich knowledge gained from the clinical algorithms and check lists of medical practice,” says Consultant Geriatrician and writer Prof Davis Coakley in a foreword that in itself deserves much thought and rereading.

This book is a delight and should be read by all healthcare professionals. The cover deserves special mention, a joyous picture of an emerging butterfly by 13-year-old Ciara O’Hanlon.

There are two pieces from ancient times, by Plato and Cicero, who had much the same concerns we have and some sharpish dialogue as well.
Consultant Geriatrician Prof Eamonn Mulkerrin picks Peig Sayers.

The eye of the geriatrician sees not only the old lady in the shawl, but the small child who steals a slice of cake, the too young girl going into service, the young lady who marries a man she barely knew and moves to an island and a culture as old as any in Europe, the mother who sits listening to the wild wind and the sea, which would, and does, kill her sons, and the queenly figure surrounded by respectful scholars.

This book gives you that, the gift of seeing differently. It makes you think. I will dip in and out of it as my hair goes grey. There is Yeats; there is Tennyson: “Matched by an ancient wife I meet and deem unequal laws unto a savage race who hoard and sleep and feast and know me not.”

This was often quoted by Rumpole of the Bailey as he faced a wrathful judge, and gloried in his age wisdom and wit. There are old favourites, such as When you are old, and Patrick Kavanagh, and writings I have never heard of. Sometimes works are different from the way you remember them and you saw them differently when you were younger. Like Gandalf, you have forgotten much you once knew and remembered things you had forgotten.

I intend to keep my copy by my side and as I grow older I will pick
it up, delve in anywhere and become so wise that I may even be mistaken for a geriatrician.