The connections of village life 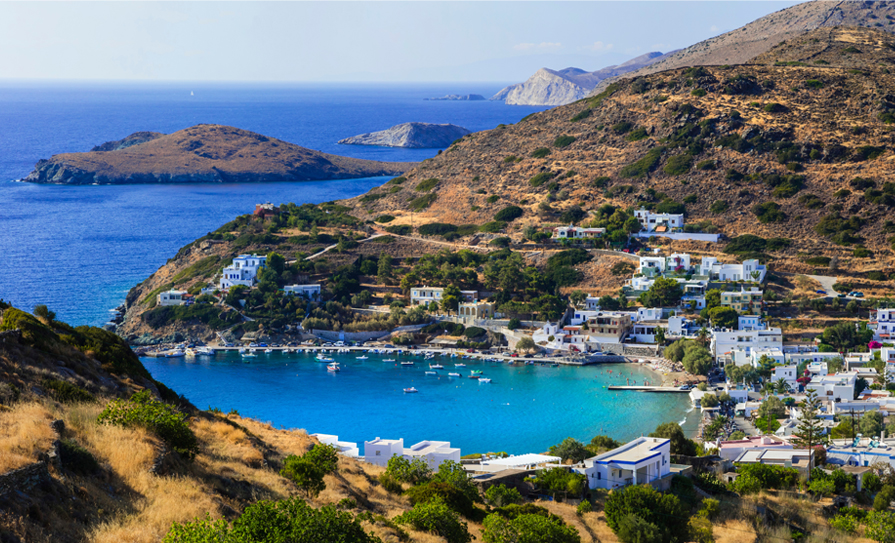 Although it is on a Greek island, the village of Kini reminded me of Dromineer

I visited the island of Syros in October. The last time I visited the Cyclades Islands, we skipped Syros. I was one of a bunch of new medical graduates and we were heading for the fun islands – Paros, Naxos, Ios – before starting our intern year. Syros was the boring island where normal people lived and had jobs, so we stayed on the ferry.

This time, I spent a week there. It’s an unusual place, full of churches like all the Greek islands, but most are not Greek Orthodox. Surprisingly, Syros has a strong Catholic tradition, going right back to the time of the Crusades. The main town, Ermoupoli, has a history that resonates now. It was built 200 years ago by refugees who fled from the horrors of another war. They paved the streets of their new town with marble and filled them with interesting architecture.

We were visiting Jo, an Irish girl working in an animal shelter in Kini, a small resort village. Jo wanted to escape from lockdown Ireland so she did what any sensible girl would do. She googled “cats” and “Greek Islands” and volunteered for the place nearest to a beach. That brought her to Kini and now she’s running ‘Syros Cats’, swimming in the Aegean, and learning Greek.

Don’t tell my dog, but at heart I’m a cat lady. I was thrilled to get a tour of this delightful sanctuary, a happy place for the 65 cats who have chosen to live there. Many have tricky medical issues from living on their wits on the streets. There are difficulties too from the constant sun exposure, especially for white cats. Because they lack protective pigment, they often develop disfiguring skin cancers of ears and nose, requiring surgery. Syros Cats relies on the work of volunteers, and on donations to pay for food and medical care, and adoptions.

As well as the cat shelter, the work includes 40 other cats who continue to “work” the tavernas, as Jo says, until they opt to “retire” up the hill to Syros Cats. I’ve seen plenty of scrawny feral cats on holidays abroad, scavenging for food and living short lives, in poor medical condition. In contrast, the cats of Kini are healthy, relaxed, and long-lived; sometimes they acknowledge us tourists and graciously accept offerings of food.

Kini is small, just a beach with a string of bars and restaurants. Visitors come from Athens on the ferry, for the summer, or for a weekend. When we were there, the weather was cool with autumn wind, the beach nearly empty, holiday houses closed up. Each day we ate delicious (and cheap) fresh food, but one by one the restaurants and bars were closing too. Soon it’ll be just the winter residents. That includes Jo, no longer a transient volunteer, and clearly a welcome addition to this small world.

Even though it’s on a Greek island, Kini felt familiar. It’s a village and it reminded me of Dromineer.

Since my return, I’ve been swimming in the lake – yes, in winter. It’s cold now and the beach is empty, apart from us early morning swimmers. The Lake Café has shut for the season and we miss it. We’ve had the last of the sailing regattas; the final sail training event for kids; and the summer visitors have gone back to Dublin. It’s just Dromineer regulars now, the people who live and work here.

We will have new people soon in our tiny community, as several houses have sold, but will they be summer friends or winter residents? Change is good. When I moved here 20 years ago, there were no children in the village. This Halloween, there were plenty of mini ghouls and witches about, perhaps including some of our younger Ukrainians. Holiday homes turn into family houses and family homes turn into holiday houses. But until we know who the new owners are, it’s a bit unsettling.

There have been losses too. We’ve had funerals, some more timely than others. Recently, I watched a grave being prepared for a neighbour who died suddenly. He wasn’t young, but was still farming and sailing competitively to the end. His son was there, and 15 local men, armed with shovels, pick, measuring tape and of course, whisky, digging the grave. It’s a remarkable and enduring tradition, part of how Dromineer marks the passing of one of our own. After the burial, the family, and the same local men, set to work and filled in the grave, finishing it off neatly with the grass sods on top.

That’s life and death in our village.