Updated management of COPD in 2021 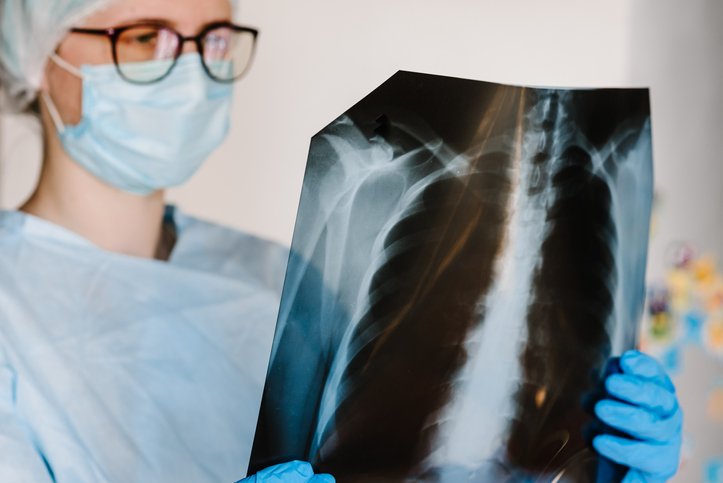 An overview of the initial diagnosis, staging and management of COPD

The Global Initiative for Chronic Obstructive Lung Disease (GOLD) definition of COPD is “a common, preventable, and treatable disease
that is characterised by persistent respiratory symptoms and airflow limitation that is due to airway and/or alveolar abnormalities usually caused bysignificant exposure to noxious particles or gases”.

A 62-year-old woman, presented to the emergency department (ED) with a three-day history of increased dyspnoea and chest tightness. Chest x-ray showed no focal consolidation and she is treated for bronchitis with oral antibiotics. She reports worsening breathlessness for the preceding four months and struggles to walk at a similar pace compared to her peers. She also complains of a dry cough for several years. She is a current smoker of five cigarettes per day. However, up until nine years previously, she was
smoking 20 cigarettes per day.

A diagnosis of chronic obstructive pulmonary disease (COPD) is suspected on the basis of symptoms and associated risk factors. This is confirmed with spirometry. The severity is further characterised using the modified Medical Research Council Dyspnoea Scale (mMRC) and the COPD Assessment Test (CAT). She is classified as stage 3D COPD, with eosinophilia, and started on an inhaled corticosteroid (ICS)/long-acting beta agonist (LABA) combination therapy, with short-acting beta-2 agonist (SABA) inhaler for PRN (when required) symptom relief.

The airflow limitation is caused by small airways disease, in response to chronic exposure to inhaled inflammatory agents, and damage to lung parenchyma – the relative contributions of each varying between patients.
The terms ‘emphysema’ and ‘chronic bronchitis’, once so widely employed are no longer incorporated in the current definition. COPD is currently the third leading cause of deathworldwide and imposes a heavy burden on health systems from patient morbidity and cost perspectives.

In the developed world, COPD is most commonly associated with cigarette smoking. Though COPD is a non-reversible disorder, disease progression can be slowed with risk factor modification. There is a prevalence of 5-to-10 per cent worldwide; however, there are a significant number of patients that are undiagnosed. The incidence and burden of COPD is predicted to continue to increase due to exposure to risk factors and an ageing population.

As well as daily symptoms, many patients suffer from periodic worsening of their condition, termed exacerbations, often requiring hospitalisation. Ireland has among the highest rate of admissions for COPD exacerbations among OECD countries. Consequently, there has recently been an
increased move towards an integrated model of care, with community-based hubs established to enable earlier diagnosis, assessment and management of patients.

A diagnosis of COPD should be considered in any patient presenting with dyspnoea, chronic cough, or sputum production and/or a history of exposure to risk factors. Chronic and progressive dyspnoea is the most common symptom. A cough is often a symptom that is discounted by patients as a ‘smoker’s cough’ and this may be productive or non-productive. Spirometry is the preferred modality to diagnose COPD. This has a high sensitivity but comparatively poor specificity.

Spirometry measures the volume of air forcibly exhaled from the point of maximal inspiration (forced vital capacity, FVC) and the volume exhaled during the first second of this manoeuvre (forced expiratory volume, FEV1). An FEV1/FVC<0.7 indicates the presence of airflow limitation. Spirometry should be performed before and after the administration of an adequate dose of at least one short-acting bronchodilator (most often salbutamol) to check for reversibility.

The mMRC dyspnoea scale is used to assess patients’ subjective breathlessness, graded, in order of worsening severity, from zero-to-four. There are a number of questionnaires designed to assess other symptoms, the most clinically applicable of which is the CAT. A score of >10 indicates poor symptom control. It is important to assess for future exacerbation risk in COPD patients. The best predictor of this is a history of previously treated events. FEV1 values in isolation are not useful predictors of exacerbation risk or mortality. The GOLD stage and dyspnoea index results are combined to give a refined ABCD assessment tool, which guides treatment (Figure 4).

The optimal management of COPD patients incorporates both pharmacological and non-pharmacological aspects. It is important for patients to be informed of the role that both they and their healthcare providers play in order to achieve optimal management and best outcomes. The concept of an integrated care model for COPD serves to bolster this approach with patients as stakeholders in their condition, deepening their understanding of the disease, and developing means of preventing acute worsening of symptoms.

This class of medications includes short- and long-acting beta-agonists (SABA, LABA) and muscarinic antagonists, and methylxanthines. These agents act by altering smooth muscle tone to increase expiratory airflow and reduce hyperinflation both at rest and during exercise. Increased bronchodilator dosing does not appear to be helpful in stable disease, although when given via a nebuliser, they can offer subjective benefit in acute episodes. Regular use of short-acting bronchodilators has no disease-modifying effect and should be discouraged.

These medications relax smooth muscle in airways by stimulating beta-2 receptors. The most commonly used SABA is salbutamol. LABAs significantly improve FEV1, dyspnoea and exacerbation rates. Adverse effects associated with beta agonists include tachycardia and the potential to precipitate cardiac rhythm disturbances. Although there have been previous concerns regarding beta-agonist use in asthma as monotherapy,
no association between their use and loss of lung function or increased mortality has been reported in COPD.

This therapeutic class blocks the effects of acetylcholine on muscarinic receptors. SAMAs, such as ipratropium, provide a marginal benefit over SABAs in terms of lung function, health status and requirement for steroids. LAMAs improve symptoms and health status, as well as improving effectiveness of pulmonary rehab and reducing hospitalisations.
Clinical trials have shown a greater effect on exacerbation rates for LAMA compared to LABA treatment.

The exact effects remain controversial and data is lacking to further extrapolate. Their use has declined due to a narrow therapeutic window and with the emergence of the long-acting bronchodilator classes.

Clinical trials have demonstrated enhanced efficacy with the use of ICS/LABA combinations in patients with previous exacerbations and eosinophilia. There is a continuous relationship between blood eosinophil counts and ICS effects. There is little to no benefit conferred with inhaled steroids for patients with eosinophil counts of less than 100 cells/µl whereas those with values above 300 cells/µl are more likely to have improved
outcomes.

The treatment effect of ICS-containing regimens is higher in patients with >two exacerbations and/or one hospitalisation in the previous year. Other factors that could have an influence on effect, such as smoking status, remain to be determined. Long-term ICS monotherapy is not recommended, however, as several studies showed this approach had no effect on FEV1 decline or mortality.

In the landmark TORCH trial, a trend toward higher mortality was observed for patients treated with fluticasone monotherapy compared to those receiving placebo or salmeterol/fluticasone in combination. In patients
with moderate to very severe COPD and exacerbations, an ICS combined with a LABA is more effective than either component alone in improving lung function and reducing exacerbation rates, though evidence for a mortality benefit is lacking.

The use of ICS increases the risk of development of pneumonia and consequently this class of agent should be used with caution in those with confirmed history of pneumonia. Some studies have shown an increase in exacerbations and/or symptoms following ICS withdrawal and there is also evidence that treatment interruption can lead to a modest decrease in FEV1, particularly in patients with eosinophil count
above 300 cells/µl.

The addition of a LAMA to an existing ICS/LABA regimen may further improve lung function and patient reported outcomes, in particular exacerbation risk, compared to dual therapy in certain populations. However, evidence of a mortality benefit is lacking with this approach. Beneficial effects are most likely to be seen in severely symptomatic patients, with at least moderate airflow obstruction and a history of frequent and/or severe exacerbations.

The importance of education in inhaler technique should be emphasised and routinely evaluated. Indeed, evidence suggests that less than one-quarter of COPD patients discharged from hospital have adequate treatment adherence. There are a number of determinants that contribute
to poor inhaler technique, including older age and a lack of education. An absence of placebo devices for training in clinical settings also contributes to this phenomenon.

The choice of pharmacological agent is determined using the updated GOLD guidelines-based ABCD assessment tool. The most significant change in recent years to treatment guidelines relates to patients in group D (see Figure 3), whereby a combination of LAMA+LABA therapy should
be considered in severely symptomatic individuals, whereas combination ICS+LABA therapy should be considered for those with significant eosinophilia. There has been no conclusive evidence that any existing medications for COPD modify the long-term decline in lung function, however.

While there is a central role for systemic glucocorticoids in treating acute exacerbations, there is no role for maintenance or daily treatment with this class of drug for COPD patients.

In those patients who are not receiving ICS, regular treatment with mucolytics may reduce exacerbations and modestly improve morbidity. The data with which to precisely identify the target population are not currently available.

Immunomodulators, anti-IL5 monoclonal antibodies and leukotriene modifiers have all been investigated as possible treatments. None of these agents, however, has demonstrated sustained clinically beneficial effects when tested in clinical studies.

This intervention has the greatest potential to limit the development and progression of COPD. A TILDA report published in 2018 found that, in Ireland, 23 per cent of those aged 15 years and older were current regular smokers. Smoking status should be addressed at all interactions. Nicotine replacement therapy (NRT) has been shown to be significantly more effective than placebo and should be offered to all patients in the absence of contraindications. Use of varenicline, bupropion and nortriptyline can increase long-term quit rates. Smoking should be correctly labelled a chronic addiction with high relapse potential. Patients should be referred to an appropriate cessation support programme.

All grades of COPD severity have demonstrated improved functional exercise capacity and health status through formal rehabilitation. These results are especially strong in those with moderate to severe disease. Optimum results are generally seen in six-to-eight weeks.

Unfortunately, many patients continue to experience distressing breathlessness and fatigue, with associated anxiety, panic, and depression in spite of optimised medical therapies. Palliative care input, traditionally reserved for end of life care, should be sought for these patients.

Long-term administration of oxygen (>15 hours per day) has been shown to increase survival in patients with severe resting hypoxaemia.

The use of NIV is appropriate in those patients hospitalised with exacerbations with persistent hypercapnic respiratory failure despite maximum medical therapy. Additionally, those patients that have a favourable experience with NIV whilst in hospital may be among a small subset that would benefit from home NIV.

COPD remains an under-diagnosed condition, with often suboptimal management resulting in high levels of hospitalisations. The importance of an integrated care model has been identified, which aims to move diagnosis and management into the community. Long-acting bronchodilators form the mainstay of therapy for most symptomatic patients.

The use of eosinophil levels to guide medication selection and the patient cohortsin whom ICS can provide benefit, has recently led to significant alterations in management approaches. However, prevention of development and progression remains critical. As the single biggest modifiable risk factor, the opportunity to encourage and support smoking cessation should be facilitated at every consultation.