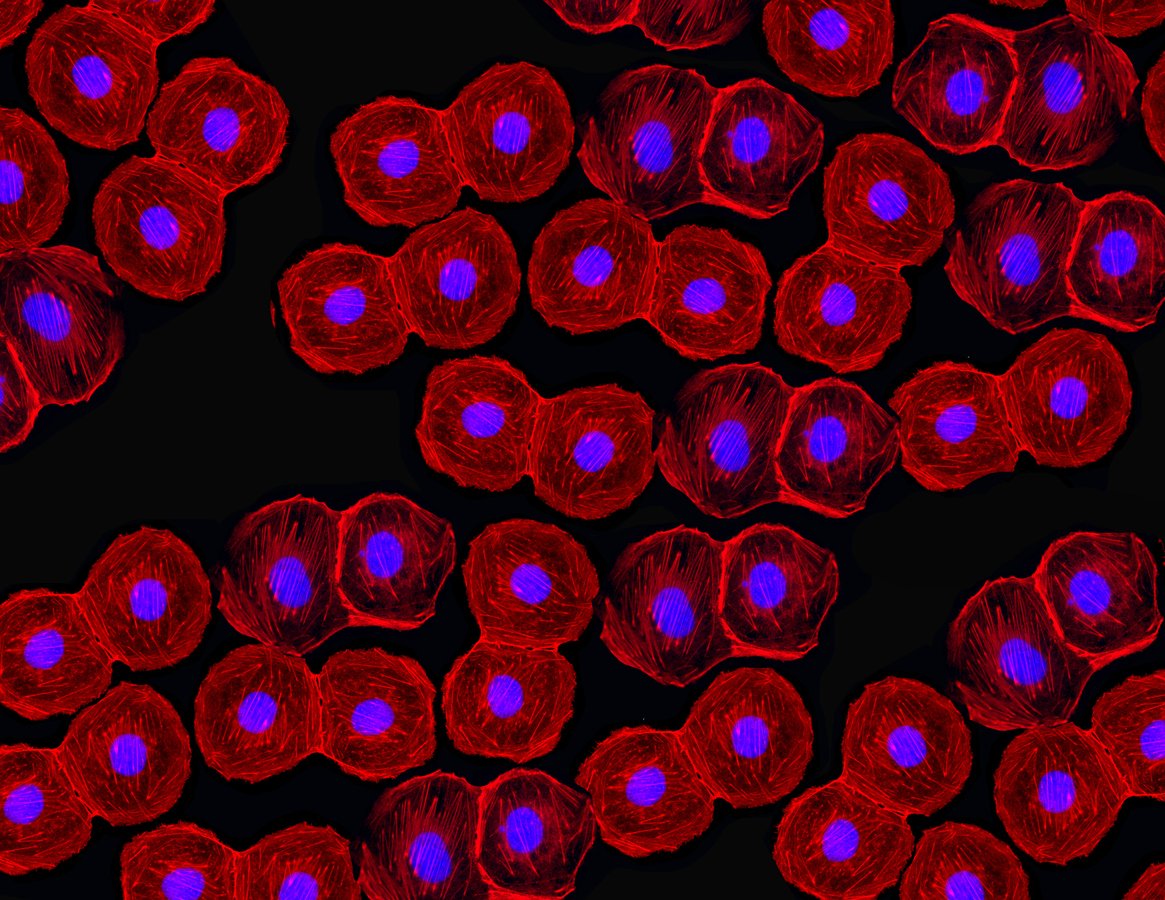 Micrograph of stem cells with fluorescent ADN in nucleus in blu

The Charles Institute, Ireland’s national dermatology research and education centre, hosts a range of guest speakers who cover a variety of topics ranging from skin cancer to psoriasis, among others. The series, which is sponsored
by RELIFE (part of the A.Menarini group), is designed to provide expert advice from a range of distinguished national and international experts in their respective fields and is chaired by Prof Desmond Tobin, Full Professor of
Dermatological Science at UCD School of Medicine and Director of the Charles Institute of Dermatology. The seminars are broadcast to attendees with a special interest in dermatology and cutaneous science in other locations, who access the talks remotely via an audio-visual link.

Attendees heard a presentation from Prof Girish K Patel of the European Cancer Stem Cell Research Institute, Cardiff University and Consultant Dermatologist at the Welsh Institute of Dermatology, University Hospital of Wales, who addressed the seminar on the topic, ‘Skin Cancer Stem Cells: From Inception to Beyond’. Prof Patel explained that the evolution of skin cancer is attributed to the mutagenic effect of sun exposure on epidermal cells, which due to insufficient DNA repair causes the cells to become transformed and evade immune surveillance.

Prof Patel pointed out that dermatologists recognise and treat actinic keratoses, Bowenoid actinic keratosis and Bowen’s disease as the earliest manifestations of a transformed pre-malignant epidermis. Furthermore, epidemiological studies have established the attributed risk of transformation to keratinocyte carcinoma in each lesion and when multiple numbers of these lesions develop within an area, and this is referred to as ‘field cancerisation’.

In these cases, the risk of cancer progression is far greater than the sum of the individual lesions, he explained. “Our findings suggest that ‘not all epidermal cells are equal’ in this process and that the ensuing tumours demonstrate a pre-programmed hierarchical expansion, with implications for tumour biology and clinical interventions,” he said.

Prof Patel outlined the continuing increased rates of squamous cell carcinoma (SCC) worldwide. “We don’t really have good skin cancer patient registries but clearly, if you add together all the keratinocyte carcinomas, their incidence per annum is much greater than for all other cancers added together,” he told the seminar. “Cumulative sun exposure and immunosuppression remain the major risk factors and in the group that have either immunosuppression or a specific genodermatosis, we can’t think of SCC as a benign disorder and certainly not one that is simply managed by surgical excision.”

He described the “hallmark lesion” of field cancerisation as actinic keratosis and presented case studies to illustrate how nodal metastases occurs at a far higher rate in immunocompromised patients. He described to the attendees how field cancerisation predisposes patients to the development of SCC: “Despite current treatment approaches, there is still a real need for both prevention and treatment,” he said.

He presented a specific clinical example where in the middle of the skin view is a hair follicle and just above the hair follicle is evidence of orthokeratosis, normal hair maturation and stratification of the hair follicle epidermis. However, on either side, nuclei are retained within cells of the stratum corneum, suggesting parakeratosis, and below that were islands of atypical keratinocytes, below which again were a dilated hair follicle infundibulum. “This is an age-old histological phenotype that is pathognomonic of actinic keratosis, so that’s the general biology,” said Prof Patel. He presented a brief overview of epidemiological data of skin tissue changes and told the seminar:

He touched on the established risk factors for this skin change, such as cumulative (unprotected) sun exposure and deficient DNA repair capacity, and told the attendees: “What interested us was once there is an SCC, the chances of regression are very low — less than 1 per cent of SCCs show regression.

But for actinic keratoses, there can be regression in approximately one-quarter of lesions each year,” which would suggest actinic keratosis is part of a spectrum, he said. “There appears to be a fluidity in actinic keratosis biology that is not quite in keeping with accumulation of mutations and progression, which suggests that there is more to that biology and may well provide a good basis for a prevention strategy.”

Prof Patel described how one of the associations between immunosuppression and actinic keratosis is a link with beta-HPV. “Papillomaviruses infect keratinocytes,” he told the seminar. “We know about the alpha viruses because they are responsible for cervical cancer, and vaccination has led to a dramatic reduction of this cancer. However, the beta and gamma HPV viruses preferentially target non-mucosal skin and are almost ubiquitous — certainly the beta-HPV types.” He explained that his research collaborator identified that in the genetic disorder of mild inherited immunosuppression, epidermodysplasia verruciformis (EV), the flat borderline lesions of the individual EV keratoses, have a heavy beta-HPV load.

“In that cohort of individuals, there is a propensity to develop SCC and they went on to show that EV keratoses and subsequent SCC exhibit high numbers of HPV-5 and 8 beta-HPV types that are associated with high risk of transformation, via episomes and copy numbers within cells,” he said. “HPV types 5 and 8 are frequently identified with actinic keratosis in organ transplant recipients, and there is a slight disconnect whereby the 5 and 8 genotypes are often lost when you get to SCC, but in the skin adjacent to an SCC, they are often present.”

Prof Patel told the seminar of his hypothesis, based on a number of observations in the laboratory. “In the wild-type mouse hair follicle, we appear to see melanin granules within keratinocytes going up into the interfollicular epidermis,” he said. “Mouse keratinocyte pigmentation is from the hair follicle; it doesn’t tend to occur in the interfollicular epidermis, but you can get these ‘dotty’ melanin granules. In the HPV mouse, there is a complete reduction in that,” he continued.

“If you then look at human skin melanin staining, which is a lot more robust, in normal skin there is a dark melanin staining along the basal layer and small dots, which represent the melanin caps above the keratinocytes.

In SCC, he explained that one of the successes of his team has been to transplant human SCCs into mice and reproduce a tumour in the mouse. “We can do this across all tumour differentiations,” he told the attendees. “The human keratinocytes continue to express human leukocyte antigen and it was possible to see the islands of SCC surrounded by and supported by mouse histo-compatibility antigen positivity stroma.

“Interestingly, we needed three million human SCC cells to reproducibly grow the tumour in the mice. If you reduce that number, the success rate drops proportionately,” said Prof Patel. However, he pointed to “a slight discrepancy, in that we have differentiation in the centre of the tumour and a proliferative margin around the edge,” he said. He summarised this area of his work by telling the seminar:

“The experiment was to take the cancer stem cell positive marker CD133 cells and CD133-negative cells and transplant them at numbers below three million for the positives and three million for the negatives and see which ones grow tumours. What we could see, reproducibly, is that with the CD133-positive SCC cells, you can grow tumours with as few as 1,000 cells, whereas with the CD133-negative cells, even at three million cells, there was nothing. This suggests that tumour-initiating cells potentially reside within the CD133 population.”

During an interactive Q&A session and discussion, Prof Tobin touched on how Prof Patel’s work is of interest to clinicians and researchers across several disciplines. He also commented on the fact that the skin on the backs of mice contains an extremely high density of hair follicles, with little or no inter-follicular skin. “No sooner are you out of one infundibulum, than you are into another one. Very different than in human skin,” he pointed out. “I was interested in your comment about changes in affected keratinocytes, located beyond the hair follicle infundibulum. The total follicular infundibulum surface area of mouse back skin, if you ‘stitch’ them all together, is very considerable when compared to human skin,” said Prof Tobin.

“It’s therefore interesting that you comment on finding a lot of cancer-related activity in the hair follicles in these HPV transgenic mice… do you find similar changes in the epidermis of the mouse ear, for example, where there is a substantial interfollicular epidermis and pigmentation capacity in the epidermis in that site, compared to elsewhere — was there any difference in where the lesions appeared, for example on the back versus the ears or the tail?”

Prof Patel replied: “Lesions appeared on the back, almost to a penny, but also on the tail,” he said. “We didn’t get lesions on the ear at all. The skin is thicker on the ear; we measured that using immunohistochemistry. The human data relates rather to the peri-follicular area, so in mice, you are right — we see a sheet of thickened epidermis, with no drop-off. But in human actinic keratoses, where there is expansion in p63 positive cells into the suprabasal layer of the epidermis, this is what peters-out.