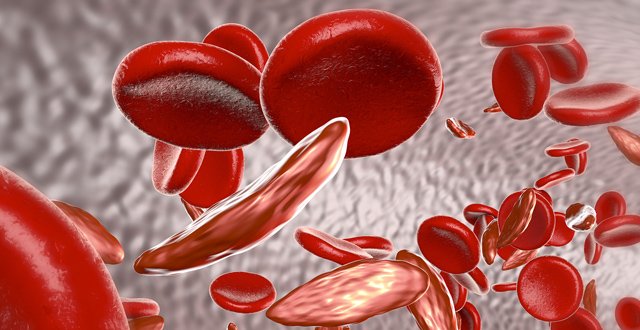 Sickle cell disease affects 30,000 births internationally each year. The major cause of morbidity and mortality is attributed to vaso-occlusive events, particularly stroke and acute chest crisis. It is the result of inheriting two abnormal genes on the haemoglobin beta globin chain, which give rise to abnormal sickle haemoglobin (HbS) in the place of normal haemoglobin HbA.

Currently, the main disease-modifying interventions are hydroxycarbamide and chronic red cell transfusion programmes. Hydroxycarbamide is a cheap and affordable medicine, which works by inducing increased production of metal haemoglobin which has a protective effect.

Red cell transfusion programmes whether by top up or exchange by erythrocytapheresis (which is the gold standard procedure) reduce HbS by replacing it with normal red cells containing HbA. However, red cell transfusions carry the risk of alloimmunisation which can make it increasingly difficult to find appropriate matched red cell units. This problem is compounded by the ethnic variability in sickle cell populations where the recipient population does not match the more frequent red cell antigens found within the blood donor population. This adds increasing demands on blood transfusion services to match what can be increasingly complex requirements. Other problems with red cell transfusion programmes include the need for definitive venous access, which also carries an increased risk of infection and catheter-associated thrombosis in sickle cell disease patients. Transfusion also results in iron overload, which mandates the use of iron chelators which have further side-effects including ototoxicity, nephrotoxicity and gastrointestinal side-effects.

Allogeneic bone marrow transplantation is currently the only definitive therapy to cure sickle cell disease. This carries significant toxicities and a potential mortality risk. This is undertaken in children who have a matched sibling, preferably at a younger age in order to minimise transplant-related toxicities and graft versus host disease. Careful patient selection as well as timing is required for this to be a safe and effective intervention. A minimum of 20 per cent myeloid chimerism is required to cure the sickle phenotype. This treatment is limited by a lack of availability of matched siblings, with less than 20 per cent of patients having an available sibling donor.

New interventions recently published include L-glutamine, idarucizumab and voxelotor all of which have demonstrated different ways to reduce complications of sickle cell disease, however, none of them deal with the underlying pathology of HbS production.

An ideal treatment for sickle cell disease would permanently reduce HbS and produce HbA or an acceptable haemoglobin which would not result in vaso-occlusive disease; this treatment would ideally be administered without significant risk of toxicity or risks of graft versus host disease as seen with bone marrow transplantation.

Gene therapy involves the introduction of genetic material into a cell, either replacing a defective missing gene or newly inserting a missing gene in a disease. Broadly, the history of gene therapy has been complex and with numerous obstacles. There had been huge excitement in the early evolution of the field that gene therapy could provide a vast number of cures of inherited diseases. However, in the late 1990s a patient enrolled in a clinical trial received an adenovirus-based gene therapy treatment for the metabolic disorder ornithine transcarboxylase deficiency. The patient died within days from a severe systemic immune response syndrome due to the therapy. This led US-based trials of gene therapy to be halted and an extensive investigation into the conduct and ethics of gene therapy-based trials was undertaken. Studies in gene therapy in Severe Combined Immunodeficiency (SCID-X1) in the early 2000s, which resulted in leukaemia in four patients, created further serious doubts about the field as a viable future therapy. As a result, the area of gene therapy was abandoned for a significant period due to a subsequent lack of funding and reluctance to open clinical trials.

In recent years, new interest in gene therapy has slowly re-emerged. Gene therapy treatment, voretigene neparvovec, was approved by the US FDA and EMA to treat the retinal disease Leber congenital amaurosis in 2017.

Within the field of haematology, gene therapy for haemophiliacs is currently in the later stages of development with encouraging studies for factor IX (FIX) deficiency and more recently the development of FVIII replacement gene replacement therapy. Most haemophilia gene therapy clinical trials involve administration of an adenovirus-associated viral (AAV)-based product which directly transduces the new gene in vivo. AAV vectors do not integrate into the host genome but insert into a cell and express the transduced genetic material allowing production of a missing or defective protein. Although traditionally viewed as not a long-lasting means of genetically altering a cell, modern treatments have shown persistence of the gene effect. These approaches suit non-dividing/post-mitotic cells such as the hepatocyte where cell replication is not required.

Within haemoglobin disorders, red cell production originates from continuous cell division and differentiation of the haematopoietic stem cell. Gene therapy of the haematopoietic stem cell compartment requires a different approach to using AAV which would not replicate with cell division and may be selected out due to the virus’s immunogenicity. For robust gene expression in a dividing cell, host genomic integration of the new gene is required so that it is continuously expressed with each cell division. Lentiviral vectors have been utilised to transduce genes into the host genome in the haematopoietic stem cell. For this approach, patient haematopoietic stem cells are collected from the patient and ex vivo manipulation and transduction of stem cells with the new genetic material is performed. The successfully transduced cells are then selected and reinfused into the patient. A number of attempts have been performed for beta thalassaemia, in which the haemoglobin beta chain is not produced and in sickle cell disease where the haemoglobin beta chain is mutated.

A final area which has led to significant advances in the field of gene therapy is gene editing technologies. The first gene editing systems discovered were zinc-finger nucleases and transcription activator-like effector nucleases (TALENs). In recent years the discovery of clustered  regularly interspaced short palindromic repeat (CRISPR) systems which occur naturally in bacteria created huge excitement in the scientific community. CRISPR/Cas9 systems involve an endonuclease enzyme Cas9, which is accompanied by a ‘guide RNA’ composed of a tracer RNA sequence and a structural CRISPR RNA (cRNA). The Cas9 enzyme separates the DNA double helix in conjunction with the guide RNA which recognises a given corresponding matching DNA sequence (tracer RNA). Once the guide RNA has located the appropriate sequence, the Cas9 system cuts DNA at this locus. A new insertion of DNA could then be inserted at this site or correction or alteration made to the sequence. Unlike the TALENs and zinc finger systems, the CRISPR system allows it to be used at almost any assigned DNA sequence by changing the short tracer RNA segment on the guide RNA. Other systems required difficult individual engineering which was not feasible for most investigators or for the technology to be readily expanded or utilised. CRISPR has already had a huge impact on cellular biology allowing diverse genetic codes to be created/modified much more easily than TALENs or zinc finger nucleases.

The ‘traditional’ historical gene therapy approach is to insert a normal β globin gene to allow production of HbA. A viral vector containing a forward orientated β globin gene cassette would in theory allow β globin chain production. However, when the β globin gene was administered in animal models with a forward direction gene cassette, the region coding for ‘intron 2’ naturally underwent RNA splicing preventing successful gene insertion. Intron 2 is required for high gene expression of β globin and hence, felt to be vital in any gene therapy attempt of this gene. This was a recurring challenge which was difficult to surmount with a forward orientated gene. Efforts to avoid this problem then focused on developing reverse direction orientated vectors. This demonstrated greater success, but again was limited in vector transduction and, accordingly, reduced gene expression. More recent studies have included the insertion of other gene elements within the vector gene cassette, which would prevent the splicing of intron 2 (eg, Rev response element in one recent paper).

Foetal haemoglobin (HbF) is comprised of two alpha chains and two γ chains and occurs naturally in utero. It decreases from before birth and is usually nearly absent by six months of life and does not return. A proportion of the population have persistence of foetal haemoglobin after this which, in sickle cell disease, confers a protective effect on patients. A number of mechanisms can account for this HbF persistence. Investigators have hypothesised that reinduction of the gene producing the γ globin chain may be possible. A number of regulatory mechanisms in erythroid differentiation have been studied. Perhaps the most exciting has been the discovery of the BCL11A locus, which is thought to be a key repressor of the γ globin gene. In sickle cell disease mouse models, when BCL11A is knocked out, normal red cell phenotypic physiology is restored, with normal red cell lifespan.

CRISPR technologies are being trialled in sickle cell disease. Vertex pharmaceuticals announced early safety and efficacy data in the CLIMB-SCD-121 study and has been granted fast track designation by the FDA, although currently published data is awaited.

Clinical concerns of potential adverse effects of gene therapy include ongoing concerns of oncogenesis from non-selective locus insertion of the viral vector systems as in earlier studies. This has not been borne out in sickle cell disease gene therapy trials but remains an open concern as long-term data matures. Similarly, durability/persistence of the new gene is not known and was an issue with earlier studies.

Historically, sickle cell disease has been a disease where the burden of disease has been greatest in areas with poor economic means to treat patients. As seen in other gene therapy treatments to date, treatment cost has been high and healthcare systems’ means to pay has been challenging and complex. Perhaps the final hurdle to gene therapy in sickle cell disease would be to make treatment available to areas of greatest need where resources may be constrained.