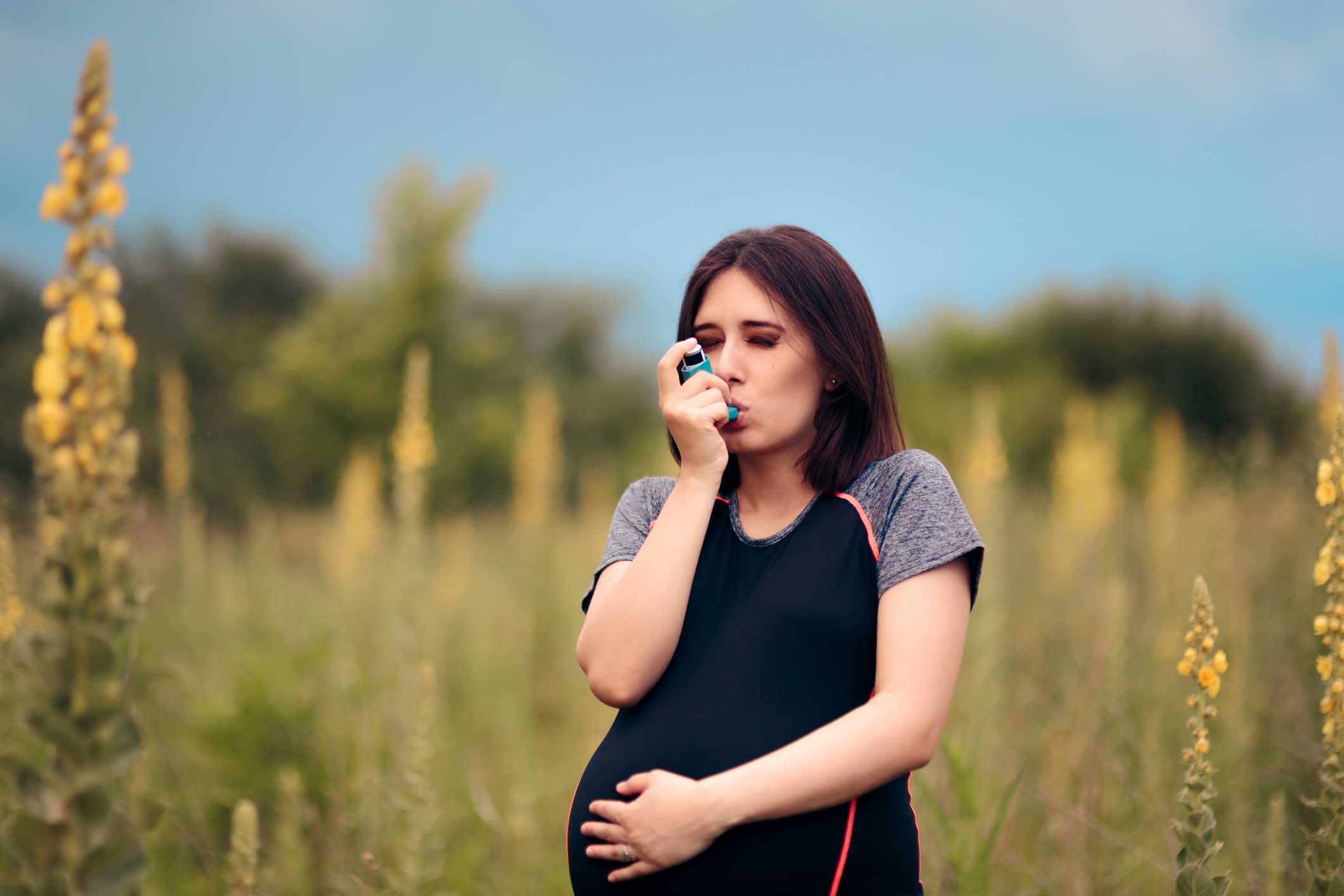 Mother to be using prescription medicine for asthmatic crises relief

Asthma is the most common respiratory disorder complicating pregnancy (affecting up to one-in-eight women), and is associated with a range of adverse maternal and perinatal outcomes.

Poorly-controlled asthma may lead to complications for pregnant women, including pre-eclampsia and gestational diabetes, and is associated with a higher incidence of Caesarean delivery. Complications for babies may include increased perinatal mortality rates, preterm deliveries, and low birth weight.

A review of studies related to asthma exacerbations during pregnancy suggested that exacerbations requiring medical intervention occur in approximately 20 per cent of asthmatic women, and approximately 6 per cent require hospital admission. There is strong evidence, however, that the adequate control of asthma can improve health outcomes for mothers and their babies.

Despite known risks of poorly-controlled asthma during pregnancy, a large proportion of women have suboptimal asthma control due to concerns surrounding risks of pharmacological agents, and uncertainties regarding the effectiveness and safety of different management strategies.

Effect of pregnancy on asthma

A meta-analytic review of 14 studies assessing changes in the course of asthma throughout pregnancy suggested that approximately one-third of pregnant asthmatic women experience a symptomatic improvement, one-third experience a worsening, and one-third remain the same. Later studies have suggested, however, that this concept may underestimate the real risk of exacerbations during pregnancy.

While a number of factors that may improve or worsen asthma have been noted, the mechanisms involved are largely undefined, and thus a woman’s asthma course during pregnancy is often unpredictable. Consequently, it is essential that a pregnant woman with asthma be followed carefully and managed appropriately.

General asthma is defined by the history of more than one type of respiratory symptom such as wheeze, shortness of breath, chest tightness, and cough that varies over time and in intensity, can often appear or worsen with viral infections, and attack at night or on waking, usually triggered by exercise, laughter, allergens and cold air, together with variable expiratory airflow limitation.

Compared with general asthma, asthma in pregnancy has similar clinical manifestations. However, if a pregnant woman only complains of shortness of breath or chest tightness, we must be careful to diagnose based on her medical history. Over two-thirds of pregnant women experience some form of shortness of breath or chest tightness during the gestation period because of physiological changes of pregnancy — often referred to as ‘dyspnoea of pregnancy’.

The goals in asthma management during pregnancy include:

Prevention of exacerbations — using therapies with minimal or no adverse side-effects.

Achieving this requires regular monitoring of clinical symptoms, provision of self-management education and the correct use of pharmacotherapies. Multidisciplinary management by all health professionals involved in a woman’s care is encouraged.

The Australian guidelines recommend managing asthma actively during pregnancy, as for asthma in other adults, including prescribing preventers if indicated, and stepping-up the regimen as necessary, with the goal to maintain the best possible asthma control and avoid exacerbations.

Regular review of asthma every four weeks during pregnancy is recommended, with asthma control assessed each time. In addition, comorbidities such as rhinitis or gastro-oesophageal reflux, which can contribute to worsening asthma, should be identified and managed.

Many studies have demonstrated a disconnect between asthma medication use prior to pregnancy and once pregnant, potentially due to changes in prescribing habits, perceived risks held by women or health professionals, or a change in asthma disease severity or control with pregnancy.

It should be emphasised that it is safer for women to use asthma therapy in pregnancy to achieve and maintain good control than to have uncontrolled asthma.

The following drugs should be used as normal during pregnancy:

Pregnancy may modify the pharmacodynamics and pharmacokinetics of some medications, but this effect is small and the dose and regimen of asthma medications rarely need to be changed in pregnancy.

In some asthmatics, disease control can only be achieved with oral corticosteroids and systemic therapy is required to manage acute, severe or life-threatening exacerbations. In epidemiological studies, oral corticosteroids have been shown to increase the risk of foetal cleft lip or palate in the first trimester. However, this increased risk is small (<0.3 per cent). Therefore, oral corticosteroids should still be prescribed when required but should be used with caution and only when there is a clear clinical need.

Leukotriene modifiers are increasingly used in mild-to-moderate asthma and have a good safety profile. Animal studies show no teratogenicity with montelukast. However, there is a paucity of data in pregnancy. Therefore, due to lack of data in pregnancy, it is prudent to substitute leukotriene modifiers with an inhaled corticosteroid prior to conception or at the beginning of pregnancy alone, or in combination with a long-acting β2 agonist.

Similarly, if leukotriene receptor antagonists are required to achieve control in severe asthma, they should not be withheld because of pregnancy.

Acute exacerbations requiring inpatient systemic medical therapies occur in approximately 20-to-40 per cent of all pregnant women with asthma and this rate is greatly increased in women with severe asthma. Exacerbations during pregnancy occur primarily in the late second trimester. The mechanisms which lead to asthma exacerbations during pregnancy are poorly understood; however, viral infections and discontinuation of inhaled corticosteroid medication may play a role.

Asthma does not usually affect labour or delivery, with less than one-fifth of women experiencing an exacerbation during labour, and severe or life-threatening exacerbations are very rare.

Women who have been on regular oral steroids may require hydrocortisone during labour.

Ergometrine, syntometrine and prostaglandin may cause bronchoconstriction and should be used with caution.

In the postpartum period, there is no increased risk of asthma exacerbation and within a few months after delivery, a woman’s asthma typically reverts to its pre-pregnancy level.

There is a paucity of  data on the safety of asthma drugs in breast-fed neonates, but in general the same medications deemed safe in pregnancy can be continued and those with a negative or an uncertain safety profile should be avoided.

Non-steroidal anti-inflammatory drugs (NSAIDs) for analgesia are to some degree contraindicated in asthma and may cause bronchospasm. However, they can be used relatively safely in asthmatic women without intolerance to NSAIDs.

Whether breast-fed children have a reduced risk of developing allergic disease, including asthma, is unproven, this does not detract from the overwhelming benefit of breastfeeding.

Pregnant mothers need to be advised that asthma control and severity can change during pregnancy due to a range of factors.

Women should be advised of the importance of maintaining good control of their asthma during pregnancy to avoid problems for both mother and baby.

Counsel women with asthma regarding the importance and safety of continuing their asthma medications during pregnancy to ensure good asthma control.

Women should be advised that treatment may need to change from time-to-time to maintain good asthma control throughout pregnancy, and therefore frequent, planned asthma reviews are necessary.

Primary care physicians can manage most pregnant women with asthma, but women with severe disease, particularly if systemic corticosteroids are considered, may need to be managed  in conjunction with respiratory physicians.