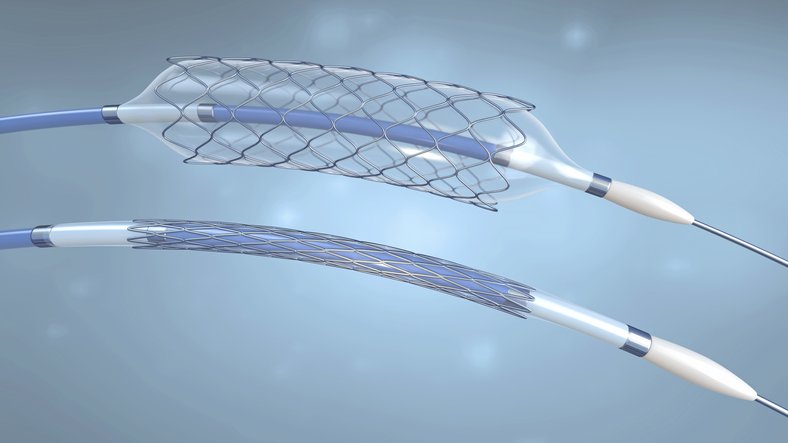 The advent of drug eluting stent (DES) implantation was an important development in the evolution of treatment of patients with obstructive coronary artery disease. Controlled elution of drug from the stent backbone over the initial 30-to-60 days post-implantation significantly reduces the extent and impact of neointimal hyperplasia, the dominant cause of stent failure after stenting.

In clinical trials with broad inclusion criteria, enrolling patients representative of those seen in routine practice, rates of clinically significant restenosis requiring repeat intervention within the first year are less than 5 per cent.1 In fact, a meta-analysis of 158 trials showed a mean rate of restenosis at 12 months of around 2.5 per cent.2

However, rates of restenosis tend to increase over time and clinical trials with long-term follow-up out to five-to-10 years show the ongoing accrual of adverse clinical events related to restenosis; such that at 10 years, up to one-in-five patients required a repeat intervention in the treated segment. This is important as most patients with obstructive coronary disease undergoing percutaneous intervention have good mid-term prognosis and life expectancy.

Causes of in-stent restenosis can broadly be considered as either mechanical or biological. Common mechanical causes include stent under-expansion, geographic miss (where the full extent of the index lesion was not completely covered), or stent fracture (caused by metal fatigue). Biological causes include neointimal hyperplasia, which may be related to relative resistance to the drug eluted from the stent backbone, or in-stent neoatherosclerosis, which is due to the re-accumulation of plaque inside the stented segment.

Intravascular ultrasound is critical to the understanding of the aetiology of in-stent restenosis. Interrogation of the re-stenosed vessel with either intravascular ultrasound (IVUS) or OCT imaging can generally confirm whether or not mechanical causes, which may require specific intervention, are present and if not, the dominant tissue type causing biological restenosis.

A number of different treatment algorithms exist outlining approaches to the management of in-stent restenosis. One such algorithm published by the European Association of Percutaneous Cardiac Intervention is shown in Figure 2.3 In a subset of patients – for example those with recurrent stent failure or left main stem stent failure – bypass surgery may be considered. However, in the majority of cases a percutaneous approach is preferred, at least initially. There are three key steps to management in this situation:

Type of lesion preparation is dependent on the identified aetiology. For example, in case of focal stent under-expansion, focused treatment with high-pressure non-compliant balloon dilatation may facilitate correction of under-expansion that went unrecognised at the time of initial stent implantation. In occasional cases with under-expansion due to severe underlying vessel calcification, disruption of the deep calcium with intravascular ultrasonic shockwave therapy has shown promise in recent clinical trials.

In cases of biological in-stent restenosis, cutting or scoring balloons are useful to disrupt tissue and facilitate repeat dilatation; in addition they may enhance the efficacy of subsequent drug-coated balloon angioplasty by facilitating uptake of the active drug into the plaque and vessel wall. Once the lesion has been successfully dilated, the final strategy for destination treatment is chosen.

In principle, there are two main options for destination therapy: either repeat stenting with another DES or angioplasty with a drug-coated balloon. In certain situations the choice is straightforward. For example, where stent fracture due to metal fatigue was the dominant mechanism, or a gap is identified between two previously implanted stents, this is best addressed with implantation of a new DES. In other cases, however, either strategy may be chosen.

Ten randomised clinical trials have been conducted comparing outcomes of patients treated with drug-coated balloon angioplasty versus repeat standing with DES. Investigators in our research group recently collected data from the principal investigators of all 10 trials and combined them in a single data set known as the DAEDALUS study.4 The main finding of this large pooled analysis was that repeat stenting within DES was marginally more effective than angioplasty with drug-coated balloon.

Against this, however, the rate of adverse safety events represented by the composite endpoint of death or myocardial infarction tended to favour drug-coated balloon angioplasty. In our practice, in suitable patients, we tend to prefer angioplasty with a drug-coated balloon, at least in the first instance of in-stent restenosis, with repeat stenting reserved for patients with more complex or diffuse disease patterns or those who fail drug-coated balloon therapy and re-present with a second restenosis.

Dual antiplatelet therapy (DAPT) after repeat percutaneous coronary intervention is not dissimilar to that recommended in patients undergoing PCI for de novo atherosclerotic disease. If presentation at the time of detection of restenosis was with acute coronary syndrome, generally 12 months of DAPT with aspirin and a P2Y12 inhibitor is recommended; if the patient’s bleeding risk is significantly elevated, a shorter therapy of around six months is recommended.

In patients with restenosis presenting as chronic coronary syndrome (stable CAD) six months DAPT is generally recommended, though if bleeding risk is high this can be shortened to three months or even one month, particularly if a drug-coated balloon strategy is chosen.

Most DCBs in clinical use are coated with paclitaxel as the antiproliferative drug. However, paclitaxel-coated balloons have recently faced safety concerns. In particular, a meta-analysis5 suggested an increased mortality signal at late follow-up in patients who underwent lower limb intervention with paclitaxel-coated devices (balloons or stents) compared with control therapy (plain balloon angioplasty or bare metal stent implantation) in the context of peripheral vascular disease.

However, a meta-analysis focused specifically on coronary intervention showed no significant difference in mortality after paclitaxel-coated balloon angioplasty compared with control devices (plain balloon angioplasty, bare metal stents or DES) at one or two years.6 In fact, at three years, all-cause mortality was significantly lower in the DCB group when compared with control treatment (RR 0.73, 95% CI 0.53 to 1.00; p=0.047).

Devices eluting sirolimus have been suggested for some time to have more favourable efficacy and safety profiles compared with paclitaxel-coated devices. Several sirolimus balloons have shown promise in the treatment of restenosis. We recently commenced enrolment in a clinical trial with one particular balloon coated with biolimus-A9.

The biolimus A9™(BA9™) Drug Coated Balloon (DCB) Study (REFORM, NCT04079192) is a first-in-man study. It is a prospective, randomised, non-inferiority trial to determine the safety and efficacy of the BA9™ DCB in treatment of in-stent restenosis. The study hypothesis is that the BA9™ DCB is non-inferior to a widely available paclitaxel-coated balloon. The primary outcome is a measure of per cent diameter stenosis identified by angiography at six months.

In-stent restenosis may impact up to 5 per cent of patients at one year and one-in-five by 10 years. Restenosis is a multifactorial process driven by stent characteristics such as stent under-expansion and loss of mechanical integrity. Biological phenomena such as neointimal hyperplasia and neoatherosclerosis are also driving factors. Angioplasty with DCB therapy is an important treatment option in patients with restenosis.

To date, most commercially available devices have used paclitaxel as the active drug. However, sirolimus-analogue-coated devices offer potentially enhanced efficacy and safety profiles and are undergoing testing in dedicated clinical trials.

RAB reports research funding to the institution of prior employment from Celonova Biosciences and research or educational funding to the institution of current employment from Abbott Vascular, Biosensors, Biotronik and Boston Scientific, but has not received personal payments from any pharmaceutical company or device manufacturer. RC reports speakers fees from Medtronic. NB reports no conflicts of interest.