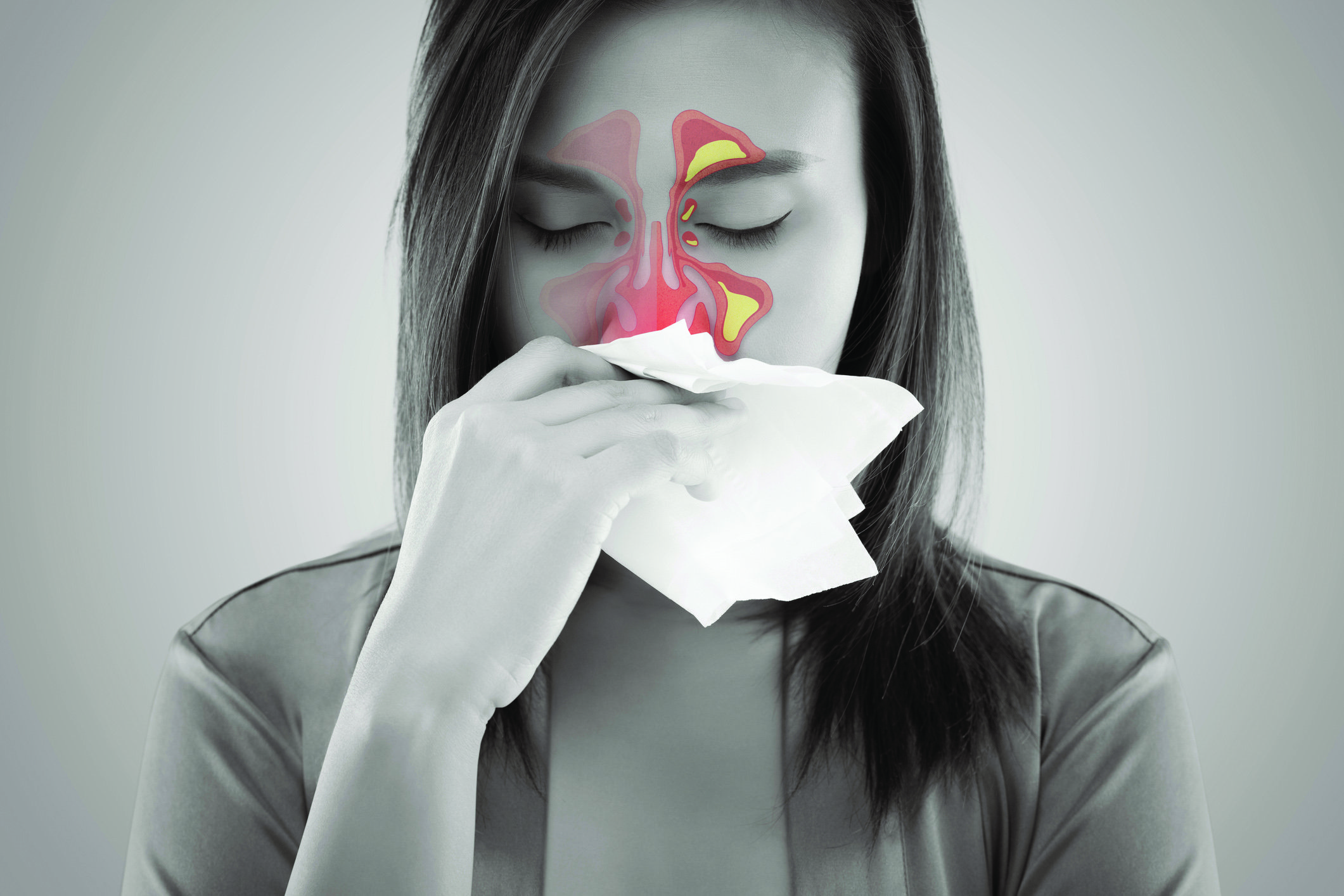 Allergic rhinitis is inflammation of the nasal passages caused by an allergen, such as pollen, dust, mould or skin flakes from certain animals. Hay fever is a type of allergic rhinitis caused by pollen or spores. Hay fever affects the nose, sinuses, throat and eyes. Hay fever usually occurs during the spring and summer months. Exactly when it occurs depends on which pollens the person is allergic to. From May to July, grass and flowers are in pollen, so this is the most common time for hay fever. The most common type of allergic rhinitis is hay fever, so I will refer to hay fever commonly in this article.

Trees, grass and plants release pollen as part of their reproductive process. Mould and fungi also release tiny reproductive particles called spores, which also cause allergies. People with hay fever can experience symptoms at various times of the year, depending on which pollens or spores they are allergic to. Grass is the commonest allergen implicated with symptoms of hay fever.

Hay fever is a common condition that affects around 20 per cent of the population. Hay fever is more likely if there is a family history of allergies, particularly asthma or eczema. It is estimated that up to 50 per cent of asthmatics and up to 30 per cent of eczema sufferers also have allergic rhinitis. Hay fever usually begins in the early teens and peaks when a person is in their 20s.

Symptoms of hay fever include sneezing, running nose, watery eyes, nasal congestion, itching in the throat, eyes and ears, and swelling around the eyes. Patients with asthma often find that asthma symptoms, such as wheezing and breathlessness, get worse when they have hay fever as well. Sometimes, asthma symptoms only occur during the hay fever season.

Allergic rhinitis is an autoimmune condition, so symptoms occur when the immune system overreacts to a normally harmless substance, ie, pollen. When the body encounters an allergen, cells in the lining of the nose, mouth and eyes release histamine-triggering symptoms of an allergic reaction.

Hay fever cannot be cured completely. Data suggests children sometimes improve with age, although many have persistent and worsening symptoms. In adults, the condition is usually persistent, with some improvement in older age.

If allergen exposure is seasonal, the most likely culprits are tree, flower and grass pollen and the symptoms are predictable and reproducible. Seasonal allergic rhinitis may therefore be diagnosed by the history alone.

To determine if a patient has allergic rhinitis, the doctor will ask questions to determine cause and type of allergy, including the time of day and year the rhinitis occurs (to distinguish seasonal and perennial rhinitis); family history of allergies; medical history; information about medication used, including decongestants, which can cause a rebound effect; and information on pets.

The doctor will examine the inside of the nose with a speculum. The eyes, ears, and chest may also be examined.

Skin tests may be performed. Patients are usually tested for a panel of common allergens. Skin tests are rarely needed to diagnose mild seasonal allergic rhinitis, since the cause is usually obvious. The skin test is not appropriate for children younger than age three years. Patients should not take antihistamines for 12-to-72 hours prior to the skin test, otherwise the allergy will not show up. Tiny amounts of suspected allergens are applied to the skin with a needle-prick or scratch. The patient is tested with selected diagnostic vaccines of tree, grass, or weed pollen, mould, house dust mites, and/or animal allergens. A hive will develop at the skin test site within 20 minutes if there is an allergy. Skin allergy tests are popular because they are convenient and inexpensive. They are not 100 per cent accurate.

The doctor may also take a nasal smear. The nasal secretion is examined microscopically for factors that might indicate a cause, such as increased numbers of white blood cells, indicating infection, or high eosinophil count. High eosinophil counts indicate an allergic condition.

Blood tests for IgE immunoglobulin production may also be performed. One test is called the radioallergosorbent test (RAST), used to detect increased levels of allergen-specific IgE in response to particular allergens. Further tests may involve a CT scan or a nasal endoscope.

People suffering from hay fever need to try to reduce exposure to triggers, such as pollen and dust. I will deal with tips on how to reduce exposure to triggers later in this article. As total avoidance of triggers is impossible, medication is often needed to control symptoms. Treatment in advance of first symptoms is an important aspect of management of hay fever. For example, starting treatment in April, prior to the normal summer increase in pollen count. There are many treatments available to relieve the symptoms. These include antihistamine tablets, nasal sprays and eye-drops. Some can only be prescribed by a GP, but many are available over-the-counter (OTC) in pharmacies.

Antihistamines are the most frequently-used oral medicines for the treatment of hay fever. Many are available without prescription and are a reasonable first-line choice for many patients. They are effective in relieving eye symptoms, runny nose, sneezing and nasal irritation but have negligible effect on nasal congestion. Antihistamines are useful in patients with troublesome symptoms at multiple sites, ie, itching of roof of the mouth, throat or eyes. However, antihistamines may have side-effects and drug interactions.

There are two main groups of antihistamines: First generation, and second generation.

Sedation is the most common side-effect of these drugs and may affect the patient’s ability to drive and operate machinery and concentrate. They should not be used in patients with prostatic hypertrophy or narrow-angle glaucoma. Tolerance to their side-effects may develop. Chlorpheniramine is available OTC in pharmacies. It can cause mild drowsiness.

Examples include desloratadine, fexofenadine, levocetirizine, loratadine and cetirizine. They only require once-daily dosage and are non-drowsy. Loratadine and cetirizine are available OTC without prescription. The non-sedating antihistamines are fast-acting, have no reported cardiac side-effects, and are not affected by the presence of food in the stomach. However, loratadine is best avoided in elderly patients and patients with liver problems.

Decongestants have a limited role in hay fever and should be reserved for periods of severe nasal congestion. Nasal decongestants sprays and drops such as Otrivine should not be used for longer than three-to-five days because of the possibility of rebound congestion, which makes the problem worse.

Nasal drops and sprays reduce inflammation and swelling of the nasal mucosa and in normal dosage, side-effects are minimal. It is best to start treatment a few weeks before the season begins. All corticosteroid nasal sprays appear to have similar efficacy. Fluticasone, beclomethasone, triamcinolone, and mometasone are the most regularly used. People find the once-daily dosage regimen of triamcinolone, fluticasone, and mometasone convenient. Side-effects are mild and transient and consist of nasal irritation and stinging, dryness, sneezing, sore throat, nosebleeds and fungal overgrowth. They should be avoided during nasal infections.

Fluticasone propionate and beclomethasone are available to buy OTC in pharmacies. Oral steroids, ie, prednisolone or depot injections, ie, triamcinolone, are only prescribed for certain groups of patients, such as those doing exams or those with severe continuous symptoms despite adequate standard therapies.

Ipratropium bromide nasal spray may be prescribed where runny nose is the predominant symptom. It does not relieve itching, sneezing or nasal blockage.

Azelastine is a prescription-only nasal antihistamine spray with a rapid onset of action. It may provide an effective and safe alternative to oral medications.

Immunotherapy is the use of allergen vaccines containing house dust mite, animal fur or extracts of grass or tree pollen. By gradually increasing the patient’s exposure to the allergen that causes the allergy, the patient becomes tolerant to it. Immunotherapy is only used in patients with severe symptoms and must be done by a specialist.

However, long-term relief can be achieved. Grazax is a grass pollen extract available in tablet form, which is now available on prescription for patients who have failed to respond to other hay fever treatments. Grazax must be started at least four months before pollen season and should be continued for up to three years.

The pollen count is often given with TV, radio, Internet, or newspaper weather forecasts. If it is humid or windy, the pollen count is likely to be higher. Generally, the pollen count is highest in the early evening, so try to avoid going outside around this time. Keep windows and doors shut in the house if it gets too warm, try drawing the curtains to keep out the sun, and keep the temperature down. Avoid cutting grass, playing, walking or camping in grassy areas. Change clothes and take a shower after being outdoors to remove the pollen from the body. Wear wraparound sunglasses to stop pollen getting in the eyes when outdoors. Keep car windows closed, and consider buying a pollen filter for the air vents in the car. Keep fresh flowers out of the house and vacuum (ideally using a machine with a HEPA filter) and damp-dust regularly. Do not smoke and stop other people from smoking in the house. Smoke irritates the lining of the nose, eyes, throat, and airways, which can make symptoms worse. Keep pets out of the house during the hay fever season; if pets normally come indoors, wash regularly to remove any pollen.

Allergic rhinitis and its impact on asthma (ARIA) guidelines

The ARIA guidelines were originally developed during a World Health Organisation (WHO) workshop in 1999 by a panel of experts. They are updated regularly.

As hay fever season is in full swing, the Irish Pharmacy Union (IPU) has issued advice on recognising the difference in symptoms between hay fever and Covid-19. With one-in-five Irish people living with hay fever, it is important that people understand how to recognise the key differences; for example, a fever or chills is common with Covid-19 but isn’t seen in those suffering with hay fever.

Ms Ann-Marie Horan, a community pharmacist and Executive Committee member of the IPU, highlighted that sufferers need to be particularly cognisant of one particular hay fever symptom: “As anyone who experiences hay fever will know, itchy eyes can be one of the most frustrating symptoms. However, one of the most important things health officials are advising to protect against Covid-19 infections is to avoid touching our faces. This underlines the importance of staying on top of hay fever symptoms by consistently taking any required treatment.

“Obviously, during the current pandemic, people should only make essential journeys, and for some, including the over-70s, those with underlying health conditions, and people who have either symptoms or a diagnosis of Covid-19 (or a member of their household does), they should not leave their homes.”

However, those who are cocooning can still phone their pharmacist or GP for advice, and medicine delivery options may be available for those who must stay at home. Ms Horan added: “With everyone on high alert for Covid-19 symptoms, it can be difficult to rationalise which symptoms could be hay fever and which are associated with Covid-19. The graphic (see above) illustrating the differences is very useful.”