Lung cancer and late detection a tale of stigma, shame, and hope 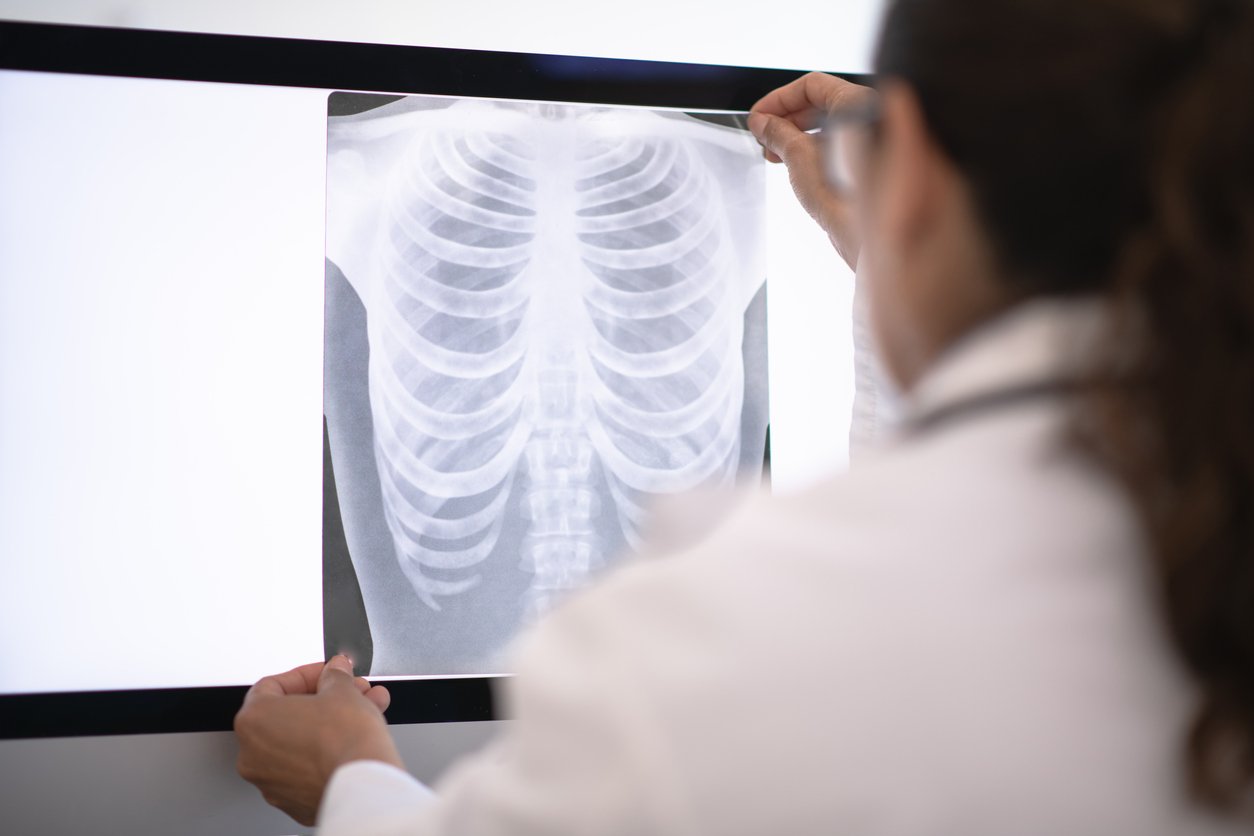 A doctor looks carefully at an x-ray while holding it up to a light screen.

As the single biggest cause of cancer death in Ireland and worldwide, lung cancer remains a major health and socioeconomic burden

Lung cancer is Ireland’s biggest cancer killer. It is the third most commonly diagnosed invasive cancer in males and the second most commonly diagnosed invasive cancer in females, claiming over 1,800 lives annually. While the reason for this is multifactorial, it is in part due to the fact that the vast majority of lung cancers (70 per cent) are diagnosed at late stage disease (stage 3, 4 or unknown).

Diagnosing lung cancer at an early stage is a critical first step to achieving higher survival rates and optimising quality-of-life for patients. Improving early diagnosis requires identifying and overcoming the barriers to diagnosis experienced both by patients and the healthcare professionals caring for them.

Lung cancer is primarily a disease of older people, with 82 per cent of cases occurring in those over 60 years of age and a median age at diagnosis of 70-74 years. It affects both males and females, and, while incidence rates are higher among males, if current trends continue the number of lung cancers among females in Ireland is projected to exceed the number in males by 2025.

Lung cancer is strongly associated with deprivation, even when adjusted for smoking status; age-adjusted incidence rates are approximately 60 per cent higher in the most deprived population quintile compared with the least deprived quintile in both sexes.

Smoking accounts for up to 90 per cent of lung cancer cases. Radon, a naturally occurring environmental gas, may account for up to 300 lung cancers in Ireland annually.

The risk of lung cancer in smokers exposed to radon gas is greatly increased compared to non-smokers, highlighting the paramount importance of continued efforts to achieve a ‘Tobacco Free Ireland’ as a key lung cancer prevention measure.

The presence of chronic obstructive lung disease (COPD) is associated with up to a five-fold increase in the risk of lung cancer.

Barriers to diagnosis may be categorised into three groups:

Patients factors include delayed presentation. This can be due to a variety of reasons including minimisation or failure to recognise the significance of symptoms, denial, fear around a cancer diagnosis, and fatalism. Evidence suggests that a longer history of smoking contributes to a greater time delay in seeking medical help due to a sense of shame, stigma, and a perception that the disease is ‘self-inflicted’.

In 2020, the Covid-19 pandemic added another potential barrier to the timely diagnosis of lung cancer. Covid-specific messaging advising people, and older individuals in particular, to ‘stay at home and self-isolate’ if they have respiratory symptoms directly contradicts early detection of lung cancer advice to have persistent respiratory symptoms checked by a healthcare professional as soon as possible.

Learning from the pandemic response highlights the paramount importance of maintaining key healthcare services, including cancer services, even in the event of unprecedented challenges to the healthcare system. Public messaging to protect people from Covid-19 must be clear and direct, but should be supplemented with advice not to ignore persistent symptoms that may indicate a different respiratory disease, and not to delay seeking medical advice.

Service innovations that can minimise the risk of Covid-19 and ensure that persistent symptoms that may indicate an alternative diagnosis are assessed by a medical professional include remote/telephone consultations, with the option of scheduling an in-person consultation if required.

Cancer awareness and beliefs in the Irish population

In 2019-2020 the National Cancer Control Programme (NCCP) undertook a National Lung Cancer Awareness Survey – the first of its kind in the Republic of Ireland. Overall, unprompted lung cancer symptom recognition was poor, with only half (51 per cent) of participants able to name cough as a symptom of lung cancer. Slightly fewer than half (48.6 per cent) identified shortness of breath, while just one-quarter (24.5 per cent) identified haemoptysis.

Recurrent chest infections and hoarseness were identified by 3.1 per cent and 1.9 per cent respectively. While prompted symptom awareness was higher, the most commonly recognised symptom was haemoptysis (94 per cent), which is present in just 24 per cent of all lung cancers, and is associated with late stage disease and is a presenting symptom in just 5 per cent of lung cancers.

Regarding help-seeking behaviour, less than half (47 per cent) of respondents stated they would contact a doctor as soon as they noticed symptoms. The most common reason to delay seeking help, expressed by 35 per cent of respondents, was ‘fear of what the doctor might find’. This was followed by ‘too busy to attend a doctor’ (19 per cent), ‘would attend a pharmacist first’(18 per cent), ‘cost’ (16 per cent), ‘fear of wasting the doctor’s time’ (14 per cent) and being ‘too embarrassed’ to attend the doctor (6 per cent).

However, in parallel with these findings, a strong sense of fatalism around lung cancer was noted, with 58 per cent of respondents believing that ‘cancer treatment is worse than the disease’, 36 per cent believing that a diagnosis of cancer is ‘a death sentence’, and 20 per cent stating that they ‘would not want to know’ if they had cancer.

Evidence demonstrates that individuals from lower socio-economic strata tend to acquire information regarding cancer risk passively, relying on their own sphere of information and intermediary channels such as family and friends, rather than actively acquiring information for themselves.

On completion of the National Lung Cancer Awareness Survey, the NCCP, in association with a team of researchers from University College Cork (UCC), undertook a series of focus groups amongst those aged over 50 years to elucidate their views on the best means of communicating public health messages to them.

The majority of participants favoured messaging that was Simple, clear and honest, Worded positively, Incorporating a shock factor, Featuring a celebrity and Targeted (SWIFT) (Figure 1). Participants felt that social media was not suitable for them and preferred to passively acquire information by means such as television advertisements, videos, billboard advertisements (including at bus stops), posters, and leaflets distributed in public settings such as churches and pharmacies.

The importance of healthcare professionals

Healthcare professionals have a crucial role to play in enabling their patients to overcome barriers to lung cancer diagnosis. Under the heading ‘Think Lung’, an NCCP infographic contains suggestions for engaging with a patient who is a smoker and may have symptoms suspicious for lung cancer (Figure 2). The NCCP has developed a suite of resources and educational tools for healthcare workers that are available on the NCCP website at www.hse.ie/cancer or contact prevention@cancercontrol.ie.

Important considerations for healthcare professionals in relation to lung cancer include:

What to watch for

Given the insidious nature of early symptoms of lung cancer, it is important that healthcare professionals are skilled in readily identifying patients who are at increased risk (the infographic provided by the NCCP in Figure 3 summarises the patient features, signs and symptoms associated with risk of lung cancer).

The signs and symptoms (cough, changing cough, weight loss, chest/shoulder pain, breathlessness, tiredness, raised platelets) are relatively non-specific, but when combined with a patient profile, may facilitate identification of the patient at risk.

As the single biggest cause of cancer death in Ireland and worldwide, lung cancer remains a major health and socioeconomic burden. Public interventions to tackle this disease should be tailored to specific groups who are at high risk.

Healthcare professionals play an important role in identifying the at-risk population within their own practice, and considering lung cancer as a possible diagnosis in symptomatic patients who fit this profile. Through such efforts, we can improve lung cancer outcomes in Ireland.