From bench to bedside in vitiligo 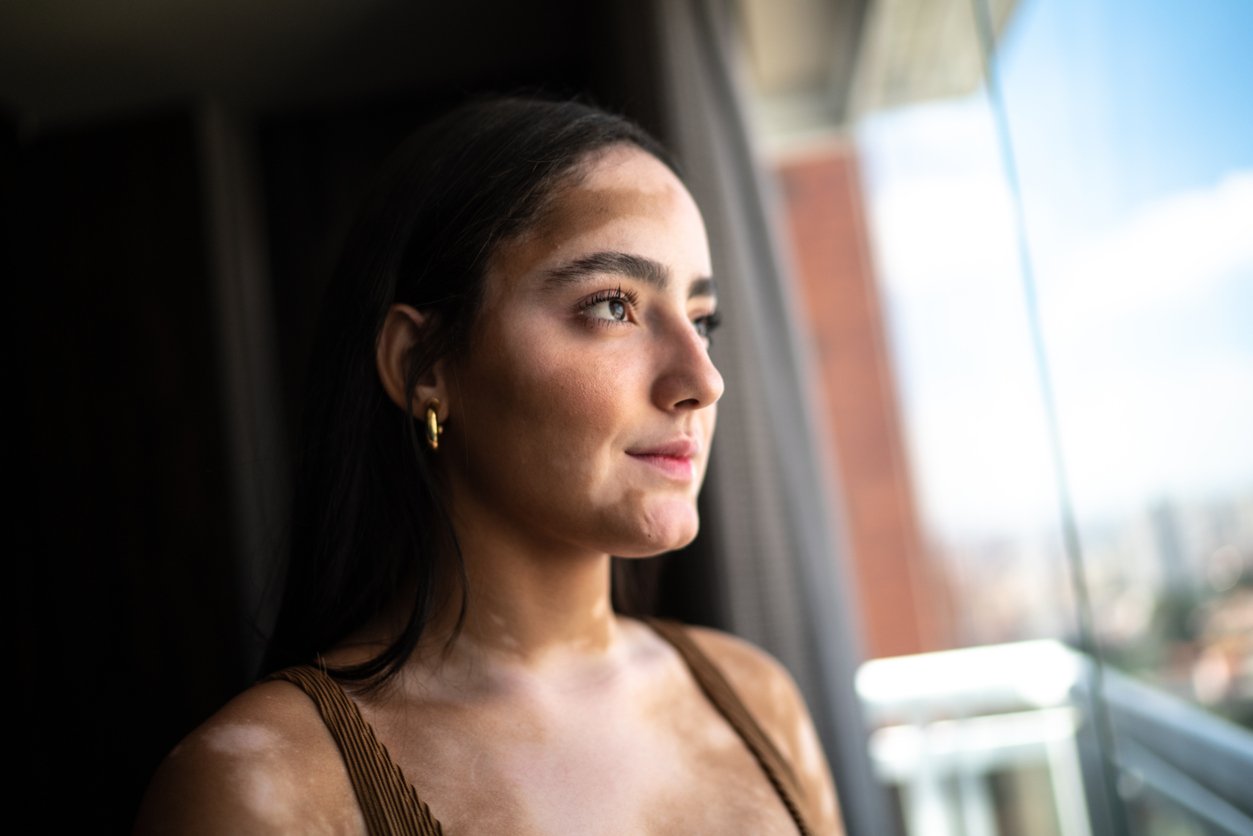 The seminars are broadcast to attendees with a special interest in dermatology and cutaneous science in other locations, who access the talks remotely via an audio-visual link. The seminar was held using a hybrid model, combining in-person attendance with interactive online access. Attendees heard a presentation by physician-scientist Prof Karin U Schallreuter, Emerita Professor at the University of Bradford, UK, and University of Greifswald, Germany, on the topic ‘Vitiligo: From Bench to Bedside’. Prof Schallreuter, a clinical and experimental dermatologist, has spent decades advancing research into skin disorders, including the biochemistry and molecular biology of pigmentary skin disorders.

Among a huge range of academic achievements, Prof Schallreuter has published more than 300 peer-reviewed articles and many book chapters. She developed the pseudo-catalase treatment for vitiligo, which she has used to treat thousands of patients. She successfully extended this treatment modality with climatotherapy at the Dead Sea in Israel and Jordan. Prof Schallreuter pointed out to attendees that vitiligo, which is characterised by an acquired loss of skin colour, is the most common depigmentation disorder worldwide. While its exact cause is yet unknown, there is an accumulating body of evidence to suggest there is a massive epidermal oxidative stress, via H2 O2 and peroxynitrite, in those affected by this disease.

Prof Schallreuter and colleagues have shown through extensive research that vitiligo appears to represent a complex reaction pattern or syndrome that involves multiple aetiological factors, some of which work in concert. She explained that in the initial stages of the disease course, there is an accumulation of H2 O2 in the mM range in the epidermal compartment of these patients. These high H2 O2 levels affect many pathways.

She provided a brief overview of the many clinical types of vitiligo, including the vulgaris, segmental, inflammatory and mixed (segmental and vulgaris) types and the body sites they can affect. Prof Schallreuter told the seminar that vitiligo should not be underestimated or treated as a ‘cosmetic’ problem. “According to the WHO, vitiligo is a disease, and not a bland cosmetic problem or condition,” she said, adding that “it is characterised by a sudden, spontaneous loss of the inherited skin colour.”

This can affect the entire body or may be localised, as on the face, neck, axillae, hands, feet or upper and lower extremities, palms and soles, the hips, ano-genital area, abdomen and sacral area, mucosa, or even hair. The initial diagnosis of vitiligo may seem obvious. But Prof Schallreuter told the attendees that there are other leucodermas mimicking vitiligo. Therefore, the correct diagnosis should always be made using a Wood’s light (351nm). Vitiligo shows a characteristic yellowish/bluish fluorescence, which is absent in leucoderma of other origins. The fluorescence is based on the presence of the H2 O2 -mediated oxidation of the important cofactor 6R- tetra -hydro-biopterin (6BH4) and the presence of oxidised 7R- tetra-hydro- biopterin. “Epidermal H2 O2 affects 6BH4- synthesis and recycling.

6BH4 is the co-factor for phenylalanine-, tyrosine-, tryptophan-hydroxylases, catecholamine synthesis and beta 2
adrenoceptor signalling, as well as for the nitric oxide reductases,” she said.

She showed the attendees examples of skin viewed with the naked eye compared to when a Wood’s light is used and provided slides to document the fluorescence. This method also allows the physician to detect old or new pigment. She then discussed the physical implications, the psychological impact of the loss of pigment (skin colour) of vitiligo, which can be extremely serious and affect mental health and quality-of-life. “Vitiligo has an unpredictable course, which is a most scary out-of-control moment,” said Prof Schallreuter. “People are conditioned to think that what is beautiful is therefore ‘good’.

A number of studies show that 85.7 per cent of patients with vitiligo experience staring and questions about it from other people, and some are asked by strangers if it is contagious, or even if it is leprosy.” In terms of incidence, she commented: “There are no difference in incidence between different skin colours, and there is no significant gender difference. However, there is a positive family history in 30-to-45 per cent of patients and onset can occur at any stage of life. It seems more frequent in puberty, pregnancy and menopause, pointing to some hormonal influence in
the pathogenesis.”

The pathogenesis of vitiligo is still a clinical conundrum, Prof Schallreuter explained, and there are several theories, including autoimmune causes, cytotoxic factors, biochemical or genetic causes, or even virus. “Together with my colleagues and students, I have demonstrated a body of evidence for the presence of oxidative stress by H2 O2 and peroxynitrite and its many consequences,” she said.

“Based on a plethora of in vitro and in vivo research and computer modelling, we demonstrated that the pigment-producing melanocyte is not the only target in vitiligo,” she said. “There is evidence for epidermal H2 O2 accumulation in the mM range, as shown by FT-Raman spectroscopy. Epidermal lipid peroxidation in untreated acute vitiligo affects the entire epidermal compartment as a consequence of H2 O2. Moreover, there is evidence for H2 O2 -mediated oxidation for many proteins and peptides, leading to impaired function, including deactivation of catalase and other H2 O2 -degrading enzymes such as thioredoxin reductase, glutathione reductase and glutathione peroxidase,” she said, pointing out that patients with vitiligo show signs of DNA damage in their skin as well as in their plasma. “

This leads us to a paradox in vitiligo,” said Dr Schallreuter. “There is DNA damage, but there is no evidence for increased incidence of solar-induced skin cancer.” Her group discovered that this patient group holds an upregulated
wild-type functioning p53 expression which totally escapes H2O2 -regulation. This p53 can directly repair DNA damage. Interestingly, after topical application with activated pseudocatalase PC-KUS, they lowered DNA damage in the plasma, said Prof Schallreuter.

She concluded that her findings strongly support the transfer from epidermal H2O2 into the system and strengthen
the generation of H2O2 in the epidermis in vitiligo.

Besides a wide range of proven intrinsic H2O2 sources, the skin also has to cope with many exogenous sources of H2O2 , including from sunlight/radiation, chemical compounds such as hydroquinone, Q10, phenols, curcumin and chlorine, and hormones like oestrogen and androgens. Therefore, it seemed a realistic overall aim to reduce the excessive levels of epidermal H2O2 , she said. “Topical application of an active pseudocatalase PC-KUS leads to reduction of epidermal H2O2, leading in turn to a) a cessation of the depigmentation process; b) to a recovery in epidermal catalase protein expression and enzyme activities; and c) to repigmentation of the white vitiligo patches,” she told the attendees. Prof Schallreuter displayed slides to show the before-and-after recovery of epidermal catalase protein expression in vitiligo after treatment with pseudocatalase PC-KUS.

Moreover, she showed the seminar slides to illustrate some remarkable improvements of vitiligo after three months of treatment, with stable disease for 10 years after ending the treatment.

“It’s important to note that the duration of the disease has no influence on repigmentation,” she told the
attendees. “Also, repigmentation of vitiligo is independent of skin colour.” She presented another case study showing a dramatic improvement in segmental vitiligo before and after 12 months of treatment with pseudocatalase PC-KUS, including the recovery of eyelash colour. This particular patient had stable disease and repigmentation more than 20 years after treatment, she explained.

“One important message for anxious parents: Repigmentation of vitiligo in children is independent of a positive family history and the extent of the disease,” said Prof Schallreuter. “There is also evidence to show a significant improvement in patients’ quality-of-life during and after treatment, especially after combined climatotherapy at the Dead Sea in a group of patients with this disease.”

She concluded with a brief recap of currently-used old and novel therapies for vitiligo, including topical
and systemic immunomodulation via pharmacological therapies, climatotherapy at the Dead Sea, light therapy,
photo-chemo-therapy and systemic antioxidants.

During an interactive Q&A session following the presentation, Prof Tobin remarked on how, regardless of the duration of vitiligo, the chances of repigmentation do not change. “On the question of when does ‘late’ become ‘too late’, I think that’s quite interesting, particularly in relation to the population of stem cell melanocytes and the loss of that reservoir.” He cited research which shows that there may be a population of melanocytes that are so immature that they do not get caught up in the disease process in vitiligo. “That may explain why as long as the melanocyte is not expressing a targetable differentiation protein, the cells is not therefore ‘recognised’ by whatever is happening around it,” he commented.