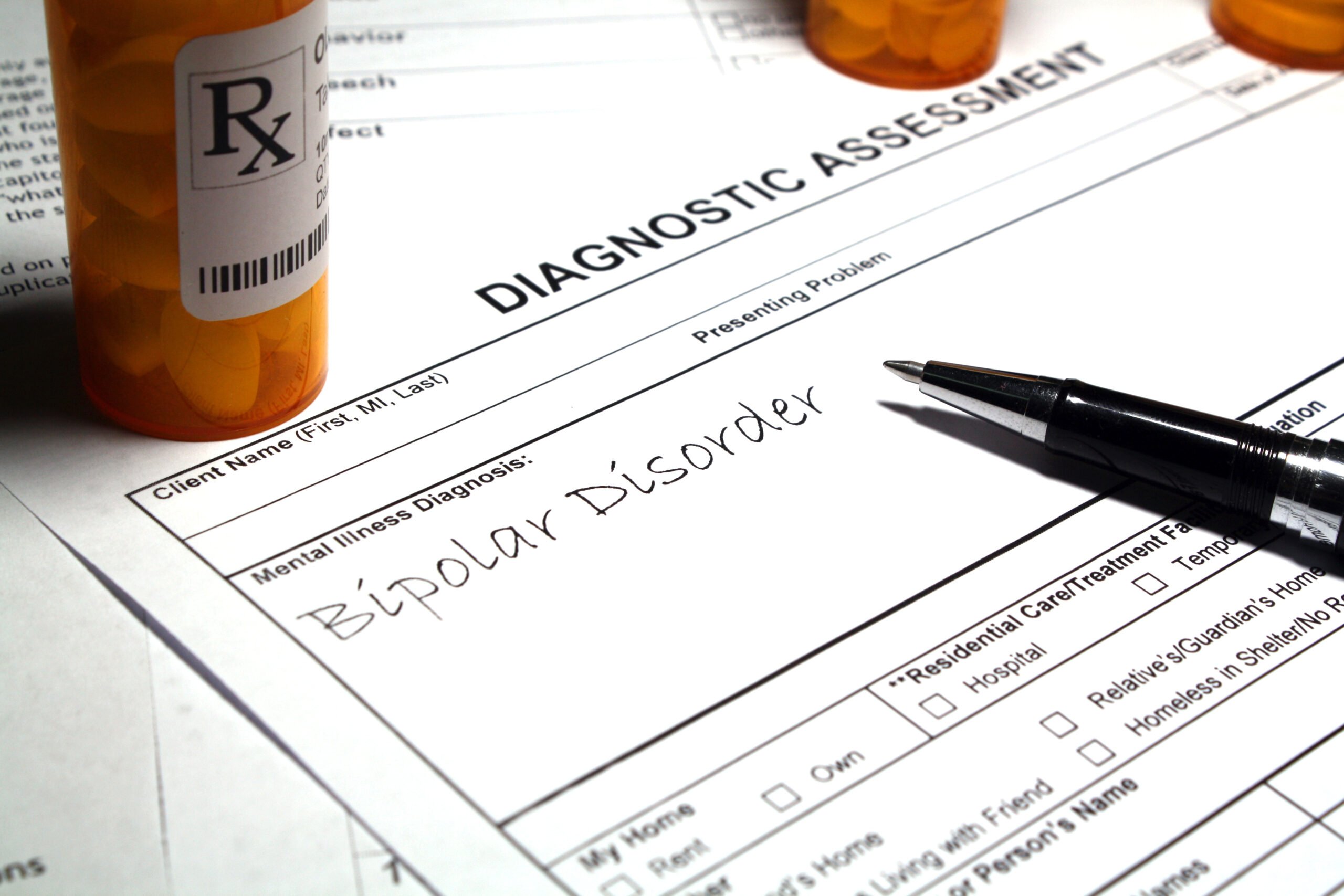 Bipolar affective disorder is a common psychiatric illness which holds a lifetime risk of around 1 per cent, affecting both men and women equally. The first episode most commonly occurs between the ages of 15 to 30 years, but may occur at any age.

Bipolar disorder can be diagnosed in accordance with the ICD-10 Classification of Mental and Behavioural Disorders when there have been at least two episodes of significant disturbance in a person’s mood and activity levels.

Hypomania is classified as an abnormality of mood and behaviour which is outside of the normal for the individual, but not to the extent that it leads to severe or complete disruption in work or function.

Elevated and irritable mood lasts for at least four days, with a minimum of three additional symptoms including a decreased need for sleep, irritability, increased activity, overfamiliarity, reduced concentration and reckless behaviour like overspending.

In mania, mood elevation remains out of keeping from the individual’s normal character and is more severe. It differs from hypomania by lasting for at least one week, and should be significant enough to disrupt ordinary work and social activities more or less completely. Mood change should be accompanied by increased energy, and several of the other symptoms listed above including grandiosity, pressure of speech and decreased need for sleep.

Psychotic symptoms such as grandiose or religious delusions of identity or role, hallucinations and thought disorder can feature in around 20 per cent of patients. Severe and sustained physical activity and excitement can result in physical neglect.

For an episode of depression, the person may report a lowering of mood, loss of enjoyment and reduced energy levels leading to a reduction in activity. There are numerous other common symptoms including disturbed sleep (difficulty in falling asleep, or early morning awakening), reduced appetite, poor concentration, feeling hopeless, worthless or guilty, reduced self-esteem, thoughts of self-harm or suicidal ideation.

Episodes can be classed as mild, moderate or severe, depending on the amount of symptoms the individual experiences. For an episode of depression to be diagnosed, symptoms must be present for at least two weeks. Mood may be worse at a certain time of the day, however, there tends to be little variation in mood from day to day.

Manic episodes tend to start abruptly, and may last for up to four-to-five months.

Depressive episodes can last longer with a more gradual onset. Mood disturbances often follow stressful life events, but that is not essential for diagnosis. In most circumstances there is complete recovery between episodes of mood disturbance.

Research into the aetiology of bipolar disorder is ongoing. The causes are believed to be multi-factorial in nature. Genetics are thought to be important with twin, family, and adoption studies all showing significant familial contribution. First-degree relatives of someone with bipolar disorder are more likely to develop the illness in comparison to the general public. Certain environmental factors including stressful life events, pregnancy and sleep disturbance can play a role.

Treatment follows a typical biopsychosocial approach and admission is recommended in more severe cases of mood disturbance as a safer way to assess and manage symptoms. Antidepressant medications should be stopped in cases of mood elation, with patients typically commenced on an anti-manic agent.

The Maudsley Prescribing Guidelines recommend an antipsychotic, lithium or valproate as first-line based on available research. Cipriani et al compared the efficacy of a number of different anti-manic agents, finding that overall olanzapine, haloperidol and risperidone were the best available at treating acute mania.

In addition lithium, valproate, carbamazepine, and other antipsychotics, such as quetiapine, aripiprazole, and ziprasidone were significantly better than placebo at treating acute mania. In practice, antipsychotics tend to be used first in the treatment of acute mania as mood stabilisers such as lithium are limited by the fact that it usually takes around a week to achieve a response.

There is less available evidence for treating bipolar depression than mania, and the use of antidepressants may increase the risk of precipitating a manic episode. Treatment should be at the level of secondary care.

For longer-term treatment of bipolar disorder, lithium is normally recommended as the first-line agent to prevent relapse of mood disturbances. It is better at preventing manic than depressive relapses, and response will likely be better the earlier lithium is commenced. Lithium is renally excreted, and has a narrow therapeutic index for treatment response.

The optimal range is between 0.6-0.75mmol/L and levels below 0.4mmol/L are likely to be ineffective. Baseline renal and thyroid function tests in addition to a full blood count, calcium, ECG and calculation of BMI are recommended prior to commencement. A 12-hour post-dose serum lithium level should be checked every five-to-seven days until a steady state is reached.

Most side-effects are dose related and typically include dry mouth, a metallic taste, fine tremor, polyuria, weight gain and aggravation of skin conditions. In the longer term, lithium can result in a reduction in renal function, and increases the risk of hypothyroidism therefore warranting the monitoring of serum lithium level, renal function and thyroid function every three-to-six months.

Serum lithium levels of greater than 1.5mmol/L can result in lithium toxicity which may present with vomiting, coarse tremor, ataxia, nystagmus, confusion, and impaired consciousness. Due to the narrow therapeutic index, some drugs such as ACE inhibitors, NSAIDs and diuretics can precipitate toxicity.

Pregnancy is a relative contraindication to lithium, given the 20-fold increased risk of Ebstein’s anomaly, a congenital heart defect.

A systematic review by Hui et al published in 2019 highlighted a number of predictors of good response to lithium including shorter pre-lithium illness duration, family history of bipolar disorder, older age of onset, absence of rapid cycling and an absence of psychotic symptoms.

Evidence shows that lithium also offers some protection in both attempted and completed suicide in patients with bipolar illness.

Valproate is another commonly used mood stabiliser however NICE recommends that it should not be used in women of childbearing age due to teratogenicity risk. Valproate should only be considered if other options are ineffective and a pregnancy prevention programme is in place.

Common side-effects include nausea, lethargy, weight gain, gastric irritation, sedation, and in some cases hair loss, thrombocytopaenia, and hepatic failure. Carbamazepine and lamotrigine are also best avoided in pregnancy because of teratogenic risk.

Structured psychological approaches, such as cognitive behavioural therapy (CBT), and psychosocial interventions for patients and family, such as the ‘Wellness Recovery Action Plan’ should be offered with an emphasis on education and relapse prevention methods.

So what happened to Jane?

She was admitted to her local psychiatric unit and commenced on olanzapine for mania, and benzodiazepines short-term to reduce distress. She had frequent reviews by the multidisciplinary team (MDT), which included CBT and family psychoeducation on bipolar disorder.

Prior to discharge she was commenced on lithium for prophylaxis of further mood episodes and will be followed up by the community mental health team.