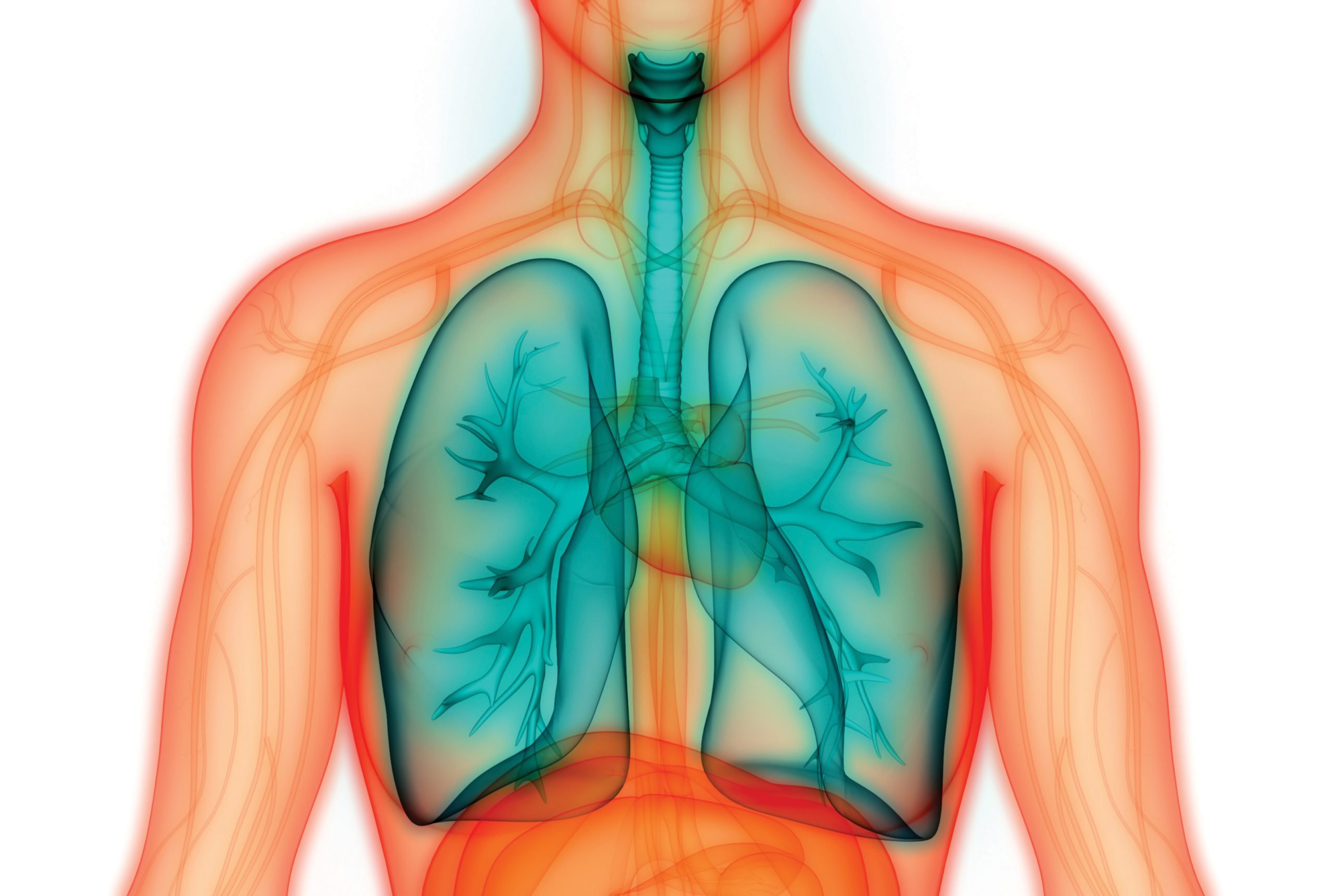 Cystic fibrosis (CF) is an inherited chronic disease, primarily affecting the lungs and digestive system. This lifelong condition usually becomes more severe with age and affects both males and females in equal proportions. The symptoms and severity of CF vary from person to person, but the majority of people with the disease have both respiratory and digestive problems. There is no cure for CF, however, life expectancy has increased steadily over the past 20 years due to better disease understanding, treatment advances, and earlier diagnosis.

Pathophysiology
CF is caused by a gene mutation leading to dysfunction of the cystic fibrosis transmembrane conductance regulator (CFTR) protein, a chloride channel of exocrine glands. The defect leads to diminished chloride secretion, which in turn leads to increased sodium absorption through epithelial sodium channels and removal of water from secretions, which become abnormally viscous.
Essentially this causes the body to produce unusually thick sticky mucus that clogs the lungs and obstructs the pancreas, stopping natural enzymes from enabling the body to break down and absorb food. The effects cause obstruction, inflammation, infection in the lungs and upper airways, tissue reorganisation, and loss of function.
CF affects multiple organ systems including the lungs, pancreas, upper airways, liver, intestine, and reproductive organs to varying degrees. The severity of the disease in the individual depends on variable organ sensitivity and on the genetically determined residual function of the CFTR protein. Almost all (97-98 per cent) affected male patients are infertile because of obstructive azoospermia and 87 per cent of patients have exocrine pancreatic insufficiency. Disease severity, particularly the degree of pulmonary involvement, also depends on other disease-modifying genes and a number of factors including socioeconomic background.

Symptoms
People with CF present with a variety of symptoms, including very salty-tasting skin, persistent coughing with phlegm, frequent lung infections, wheezing or shortness of breath, poor growth/weight gain despite a good appetite and frequent greasy, bulky stools or difficulty in bowel movements.
Symptoms usually appear in the first year of life, although occasionally they can develop later. The thick, viscous mucus in the body affects a number of organs, particularly the lungs and digestive system. Typical respiratory symptoms include cough and wheeze. Recurring chest and lung infections are caused by the continual build-up of mucus in the lungs, which provides an ideal breeding ground for bacteria.

Diagnosis
Early diagnosis provides opportunities for earlier medical intervention and improves the quality- and length-of-life of CF patients. Providing infants with the best possible care results in better nutritional and lung function outcomes later in life.
Chronic disease of the lungs and paranasal sinuses varies among patients with CF and can be difficult to distinguish from frequent recurrent bouts of bronchitis and/or pneumonia, especially in young children. Children with cough, sputum production, or wheezing of more than three months’ duration, persistently abnormal radiological findings, persistently positive bacterial cultures of respiratory secretions, or clubbing of the fingers should undergo diagnostic testing for CF even if their neonatal screening test was negative. The same applies for children with bilateral chronic rhinosinusitis with frequent exacerbations, with or without nasal polyps.
Most cases of CF are diagnosed through screening tests, which are carried out early in life. However, some babies, children, and even young adults are diagnosed later following unexplained illness. The main ways of diagnosing CF are newborn screening (heel prick test), antenatal testing (chorionic villus sampling (CVS)), carrier testing (genetic screening), and sweat testing. If both parents are carriers of the faulty gene, but don’t have CF, a child has a one-in-four chance of being born with CF; a two-in-four chance of being a carrier, but not having the condition; and a one-in-four chance of being completely free of the condition.
About 2,000 CFTR gene mutations have been identified to-date and genetic testing provides important information to assist the diagnosis and treatment of CF. F508del is the most commonly detected CFTR mutation in Irish people living with CF. In 2016, 91.6 per cent of the CF population had at least one copy of F508del, 15.2 per cent had at least one copy of G551D, and 5.8 per cent had at least one copy of R117H. All other CFTR mutations affect less than 5 per cent of the CF population. Just over 55 per cent of patients living with CF in Ireland in 2016 had two copies of the F508del mutation (F508del homozygous). Approximately one-in-19 of the indigenous population are thought to carry one copy of the altered gene that causes CF. Testing is available at the National Centre for Medical Genetics in Crumlin, Dublin.

Associated health issues
Organisms detected in the airways of individuals with CF in Ireland in 2016 included Staphylococcus aureus (54.7 per cent) and Haemophilus influenza (29.0 per cent), found most frequently in children. Pseudomonas aeruginosa was detected in at least one respiratory sample of 60.3 per cent of adults.
Two strains of bacteria that commonly infect people with CF are Pseudomonas aeruginosa and Burkholderia cepacia complex. They multiply in the thick mucus inside the lungs and may cause serious health problems and repeated chest infections.
As more and more people with CF become infected with these bacteria, antibiotic resistance is a growing issue, which is why cross-infection is such a problem. Lung infections caused by Pseudomonas aeruginosa and Staphylococcus aureus can become chronic and cause an irreversible reduction in lung function.
CF causes mucus to block the ducts in the pancreas leading to malnutrition, steatorrhoea, and diabetes. People with CF who develop diabetes may find it difficult to gain weight or may lose weight and see a decline in their lung function. CF-related diabetes is usually controlled by regular injections of insulin. Diabetes rarely occurs in children with CF.
Pancreatic insufficiency (PI) is manifested by voluminous, fatty, shiny, malodorous, pulp-like stools, abdominal symptoms, dystrophy, and deficiencies of fat-soluble vitamins (eg, haemolytic anaemia due to vitamin E deficiency) and trace elements (eg, zinc dermatosis). The diagnosis can be established by a low faecal elastase measurement. Patients with primary pancreatic insufficiency are at increased risk of chronic and/or recurrent pancreatitis.
People with CF are also prone to sinusitis and hay fever. Older children with CF can develop a form of arthritis in joints such as the knee, which improve with time and treatment. Older children and adults with CF are also prone to osteoporosis due to repeated infection, poor growth or weight, lack of physical activity and lack of vitamins and minerals due to digestive problems, with steroid use also a risk-factor.
One-in-ten babies with CF is born with meconium ileus and an operation to remove the blockage will probably be required.
In nearly all men with CF, the spermatic tubes do not develop correctly, making them infertile.
Women with CF may find their menstrual cycle becomes absent or irregular if they are underweight. There is also an increased thickness of cervical mucus, which may reduce fertility. However, most women with CF can conceive without any difficulty. If the bile ducts in the liver become blocked by mucus as the disease progresses, this can be serious and in some cases a liver transplant may be necessary.

Cystic Fibrosis Ireland Annual Conference
Dr Preston Campbell, former president and chief executive officer of the Cystic Fibrosis Foundation in the US, and a leading medical expert in CF, has been announced as the keynote speaker at the forthcoming Cystic Fibrosis Ireland annual conference taking place in Galway from Friday 3 April – Sunday 5 April. Full information at www.cfireland.ie. The conference comes ahead of Cystic Fibrosis Ireland’s annual flagship fundraising appeal, 65 Roses Day, on Friday, 10 April, where people can lend their support by buying a purple rose for €2 or by donating online at www.65RosesDay.ie.

Ivacaftor (Kalydeco) potentiates the CFTR protein, a chloride channel present at the surface of epithelial cells in multiple organs. This facilitates increased chloride transport by potentiating the channel-open probability of certain CFTR gene mutations. It is indicated for CF in adults and children aged six months or older who have one mutation in the CFTR gene. It is not effective when used without a CFTR corrector (eg, lumacaftor) if the patient is homozygous for the F508del mutation in the CFTR gene.

This combination product contains lumacaftor, a CFTR corrector. Lumacaftor corrects the processing and trafficking defect of the F508del-CFTR protein to enable it to reach the cell surface where the CFTR potentiator, ivacaftor, can further enhance the ion channel function of the CFTR protein. Ivacaftor facilitates increased chloride transport by potentiating the channel-open probability of the CFTR proteins. The combination is indicated for CF in patients aged six years or older who are homozygous for the F508del mutation in the CFTR gene. This combination is well-tolerated in young children.

CFTR corrector and potentiator combination regimen. It is indicated for CF in patients aged ≥6 years who are homozygous for the F508del mutation or who have at least one mutation in the CFTR gene that is responsive to tezacaftor/ivacaftor based on in vitro data and/or clinical evidence.

Ireland has the highest incidence per head of population of CF in the world, with three times the rate of the US and the rest of the European Union. Between 2008 and 2016 an average of 38 individuals in Ireland were diagnosed with CF each year, with 22 diagnosed in 2016.

At the beginning of each year, the CF Registry of Ireland conducts a survey of hospitals known to provide care to people with CF in the Republic of Ireland. The registry has gathered information on people with CF since 2002. The annual hospital census carried out by the registry in 2016 showed that 1,339 people were living with CF in Ireland. Most patients attended one hospital for CF care (n=1,107, 82.7 per cent), whereas 17.3 per cent (232) shared care at two or more hospitals. The year 2016 was also the first time that the median age for people with CF reached 20 years (half of the population were aged over 20 years and half under) in Ireland, while 8.9 per cent of the CF population in Ireland was recorded as over 40 years old. There were 1,266 individuals (565 children and 701 adults) with CF on the registry on the last day of 2016, representing 94.5 per cent of people living with CF in Ireland in that year.

The number of people (children and adults) diagnosed in 2016 (n=22) and 2015 (n=28) is likely to be an underestimate, resulting from a delay in joining the registry. Since the introduction of the National Newborn Bloodspot Screening Programme (NNBSP) in July 2011, 156 individuals have been diagnosed as a result of the screening programme. Sixteen of the 22 new CF diagnoses made in 2016 (72.7 per cent) were made following newborn screening.

The registry recorded 6,792 outpatient visits to CF specialist centres and CF clinics across the country by 1,133 individuals with CF in 2016, however, CF day-unit and drop-in visit statistics are thought to be underestimated.

The number of deaths from CF in Ireland varies from year to year. Since 2000, an average of 18 individuals died annually (range: Seven to 31). The deaths of 13 people with CF occurred in 2016 (nine female, four male). These individuals died between the ages of 11 and 59 years, with the median age of death 32.5 years. Deaths were due to respiratory/cardio-pulmonary causes (n=9), transplant-related issues (n=2) and the cause of death in two individuals was not known to the registry at the time of reporting.