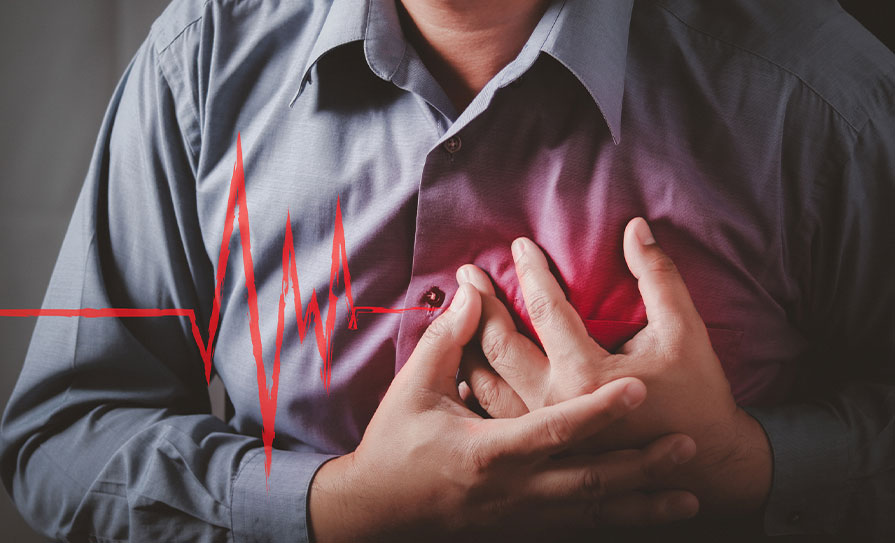 Management of arrhythmias depends on the specific type of arrhythmia, and often involves risk factor modification and the avoidance of any identified triggers for arrhythmia.

Agrowing segment of the population in Ireland and elsewhere are experiencing arrhythmias. In the US, for example, it is estimated that approximately one-in-18 people, or 5 per cent of the population, has an arrhythmia. A study has also demonstrated that one-in-four Americans over the age of 40 years could develop an irregular heartbeat.

Furthermore, the problem appears to be increasing. Atrial fibrillation (AF) is the most common sustained cardiac arrhythmia and was estimated to be present in 5.2 million Americans in 2010, with this being projected to increase to 12.1 million cases in 2030. Clearly, we are faced with a growing problem and one which will require new and more effective treatments.

The incidence and prevalence of AF increase with age, and approximately one-in-four European adults over the age of 55 will develop AF. Here in Ireland, the Irish Longitudinal Study on Ageing (TILDA) estimated the prevalence of AF at 3.2 per cent in Irish people over the age of 50 years, and using national population projections, this number is expected to increase three-fold to 107,000 by 2040.

Arrhythmias can cause significant morbidity and mortality. Those affected by the condition can present with palpitations, syncope, heart failure, cardiac arrest, or shocks from previously implanted defibrillators. Atrial flutter and AF are associated with an increased risk of stroke, and AF is associated with increased mortality.

Ventricular arrhythmias are abnormal rhythms originating from the ventricles which can range from harmless and asymptomatic to fatal. Premature ventricular contractions can be harmless but are often highly symptomatic. Ventricular tachycardia (VT) can be associated with sudden cardiac death if sustained. Ventricular fibrillation is fatal without intervention such as defibrillation, and is usually seen in those with structural heart disease, but may also occur in young, otherwise healthy individuals. The risks for ventricular arrhythmic death were highlighted when a high-profile athlete recently suffered a cardiac arrest during an international sporting event. This event demonstrated the importance of cardiopulmonary resuscitation (CPR) and early defibrillation in cardiac arrest and it has increased general awareness of cardiac arrhythmias.

Management of arrhythmias depends on the specific type of arrhythmia, and often involves risk factor modification and the avoidance of any identified triggers for arrhythmia. Some acute interventions can acutely terminate arrhythmias, such as Valsalva manoeuvre or adenosine for supraventricular tachycardia (SVT), electrical or chemical cardioversion for AF atrial flutter or VT, or defibrillation for ventricular fibrillation. These measures are very useful to acutely alleviate symptoms and they are potentially life-saving in the short-term, but they do not prevent arrhythmia recurrence.

Methods of rhythm control for arrhythmias usually consist of anti-arrhythmic drug therapy or catheter ablation. Implantable cardioverter defibrillators (ICDs) can be inserted in selected patients at risk of ventricular arrhythmias and sudden cardiac death. Increasingly, catheter ablation has become the first line therapy for many arrhythmias, including SVT and AF.

Three-dimensional (3D) mapping systems utilise advanced technology to create a 3D map during procedures, which reduces the need for an X-ray or f luoroscopy. The systems create anatomical information and can annotate cardiac signal timing on the map to create a map of the arrhythmia mechanism. The map can also create ‘tags’ to show where previous ablation lesions have been placed and how much energy has been delivered (Figure 1). These systems have allowed more complex arrhythmias to be ablated and this has reduced procedure time, and hence reduces complications related to radiation exposure.

In fact, it is now possible to perform zero fluoroscopy ablation procedures for selected arrhythmias such as SVT, AF, and atrial flutter. Radiation exposure for patients can increase the risk of malignancy, especially in children and during pregnancy. Also, for proceduralists and electrophysiology (EP) lab staff, the risks of radiation exposure are an occupational hazard and require lead shielding to be worn. Lead aprons worn by staff can be quite heavy and are associated with long-term orthopaedic injury.

SVT is a common problem affecting patients of all age groups. These arrhythmias can cause significant morbidity and they can present in children, adults, the elderly and during pregnancy. While some of these arrhythmias can be managed with lifelong medical therapy or conservative measures, medically-refractory cases are managed with catheter ablation. Indeed, many young patients would opt for catheter ablation as opposed to lifelong medical therapy even if such therapy was effective in suppressing the arrhythmias.

SVT is recognised by a regular narrow complex tachycardia on electrocardiography (Figure 2). There are multiple mechanisms for SVT and while some SVTs can be ablated without 3D mapping, this leads to longer procedure times and increased fluoroscopy. It is now recommended by professional societies such as the Heart Rhythm Society, European Heart Rhythm Association, and the Asia Pacific Heart Rhythm Society that 3D mapping be utilised for certain SVTs; for SVT in younger or pregnant patients.

Typical atrial flutter is recognised by a characteristic electrocardiographic pattern (see Figure 3). This is a common arrhythmia which can cause significant morbidity and has an elevated stroke risk, which may be an indication for anticoagulation. While direct current cardioversion can manage the rhythm acutely, recurrences are prevented with catheter ablation of the cavotricuspid isthmus – an area in the right atrium which is critical for the propagation of this abnormal arrhythmia circuit. The use of 3-D mapping allows for this procedure to be performed with reduced procedure times and with the potential for zero f luoroscopy.

AF is the most common sustained cardiac arrhythmia and its incidence increases with age. It is a cause of significant morbidity and mortality and carries an increased risk of stroke. Recent studies have shown catheter ablation to be more efficacious than anti-arrhythmic drugs as a first-line therapy of paroxysmal AF.

Historically, rate control had been considered adequate if symptoms were controlled, but recent data now supports early rhythm control strategies for AF. Early rhythm control with catheter ablation in the first year after diagnosis is associated with reduced mortality in the East AF Net study. AF is a progressive condition with a natural history that starts with paroxysmal AF (where episodes resolve spontaneously), and can result in persistent AF where interventions such as cardioversion are needed to restore sinus rhythm.

Success rates for treatment of paroxysmal AF are higher for persistent AF, and therefore early intervention with catheter ablation is becoming standard of care. The restoration of sinus rhythm can dramatically improve symptoms and quality-of-life in patients with AF and it also improves cardiovascular outcomes. As such, this strategy received a class IA recommendation in the latest European Society of Cardiology (ESC) guidelines.

AF patients may be treated with a rhythm control strategy which, more increasingly, involves catheter ablation of AF. The technical aim of catheter ablation of AF is to electrically isolate the pulmonary veins, which are responsible for electrical triggers in the majority of AF cases. Recent advances in mapping technology and catheter ablation technology have reduced procedure time significantly and dramatically reduced f luoroscopy times. It is now possible to perform zero fluoroscopy AF procedures in selected cases. The safety of these procedures has increased with progress in new technologies and procedural refinements.

Technologies for ablation of AF continue to advance at a rapid rate and there are several modalities to achieve electrical isolation of pulmonary veins. Radiofrequency catheter ablation is the most versatile modality and is used for all types of arrhythmia ablation, including SVT, atrial flutter, and VT. Other modalities for achieving pulmonary vein isolation include cryoballoon ablation, and more recently pulsed-field ablation. Currently at Blackrock Health Galway Clinic radiofrequency catheter ablation using 3D mapping is used to achieve pulmonary vein isolation. (See Figure 4).

VT is recognised on electrocardiogram as a wide complex tachycardia. Such arrhythmias can be effectively treated with catheter ablation of the arrhythmogenic focus and a 3D mapping system can be critical in effectively mapping and ablating these potentially complex arrhythmias. VT can occur in younger patients with structurally normal hearts. These arrhythmias can originate from the outf low tract regions of the heart, the papillary muscles, or the fascicles of the conduction system in the left ventricle. Such arrhythmias are amenable to treatment with 3D mapping and catheter ablation.

More commonly, VT occurs in patients with known structural heart disease such as myocardial infarction and can present as palpitations, syncope, heart failure, cardiac arrest, or shocks from a previously implanted defibrillator. Catheter ablation of VT in patients with structural heart disease has been shown to reduce recurrence of such arrhythmias and thereby improve quality-of-life for patients with VT. 3D mapping can be critical in identifying the arrhythmogenic substrate in the ventricles and facilitating ablation. (See Figure 5)

ICD shocks can be life-saving, but can be quite distressing for patients, especially if recurrent shocks occur, which means that effective alternative treatment options are often needed. Anti-arrhythmic drugs such as amiodarone can be effective, but have the risk of significant toxicity.

Moreover, it is necessary to ensure that these treatment options are available throughout Ireland, so that patients from the various regions are not always required to travel to Dublin. To this end, the first VT ablation procedure using 3D mapping was performed in Blackrock Health Galway Clinic in June of 2022. This was performed on a patient with a prior admission for VT storm with multiple ICD shocks. The procedure was successful and uncomplicated and the patient has done very well in follow-up to date.

Furthermore, the acquisition of a state-of-the-art 3D mapping system at Blackrock Health Galway Clinic has opened up new possibilities and pathways of care for arrhythmia patients in the west of Ireland. Arrhythmias are a growing problem and delayed treatment can lead to adverse outcomes. Complex arrhythmias can now be managed in the west of Ireland in selected patients and this will reduce the need for travel to Dublin or Cork for patients and their families.

Removal of barriers to care and improving access to catheter ablation procedures will lead to significant improvement in quality-of-life of those with arrhythmia. Early referral to a cardiac electrophysiologist for the aforementioned arrhythmias should be considered to improve treatment success rates and patient outcomes.

Dr Tuohy was fellowship trained in cardiac electrophysiology in Cleveland Clinic Ohio and practiced as an electrophysiologist in Maine Medical Centre, Portland, Maine and was Assistant Professor in medicine with Tufts University Boston. He returned to Ireland in 2020.