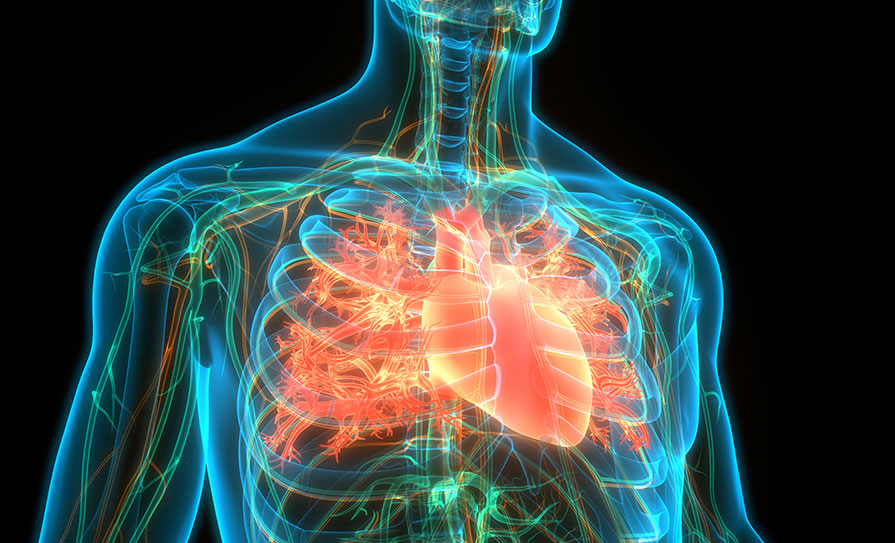 How a personalised exercise prescription can improve the health of AF patients.

Atrial fibrillation (AF) is a common type of heart arrhythmia that can affect people of all ages. Although the mechanisms are not completely understood, it involves dysfunction of the sinoatrial (SA) node, the electrical pacemaker of the heart. Simultaneously it may also involve erratic signalling patterns from pulmonary veins. These phenomena lead to disorganised and chaotic waves conducting intermittently through the atrioventricular (AV) node. This leads to irregular activation of the ventricles that generate the heartbeat.

The primary pathologic change in AF is progressive fibrosis (and resultant weakening) of the atrial walls, due to atrial dilation. Fibrosis is not limited to the atrial walls and may occur in the SA and AV nodes.

Upon presentation for an exercise assessment, the case report (see below) patient’s diagnostic classification was long-standing persistent AF. While the catheter ablation surgery in 2020 was initially successful in restoring sinus rhythm, he subsequently returned to asymptomatic AF after a period of nine months (initially notified by his Apple smart watch and subsequently confirmed by 12-lead ECG). He has been in AF since. He is taking 20mg of the direct oral anticoagulant rivaroxaban and 5mg of the beta blocker bisoprolol. Before any further interventions (such as a second ablation procedure) his cardiology team and GP have encouraged smoking cessation, a reduction in alcohol intake, and a supervised exercise programme to help with cardiorespiratory fitness and weight loss. The patient was referred directly and was not given an exercise stress test prior to commencement of his clinical exercise programme.

The patient was assessed for body composition using Tanita Bioelectrical Impedance scales. A sub maximal VO2 test (Chester step test) was performed to gauge cardiorespiratory fitness levels. In the case of a heart that is functioning in sinus rhythm, typically the presence of a beta blocker (such as bisoprolol) means an adjustment of 10-to-20 per cent reduction in calculations for target heart rates during exercise. However, in this case the beta blocker is part of a rate control strategy adopted by the patient’s cardiologist. Aligned to the long-standing persistent nature of this patient’s AF, reliance on heart rate readings to gauge exertion levels was not possible. Therefore, the sub maximal VO2 test (Chester step test) was performed using the Borg Rating of Perceived exertion (RPE Borg) scale to ascertain exertion levels. An additional six-minute walk test was also used to estimate VO2 max.

The upper limb strength levels were measured using hand-held dynamometry. Lower limb strength and ‘one rep max’ for a dead lift was measured using a ‘back and leg’ dynamometer. Some functional strength tests were also measured. SpO2 levels were 99 per cent and pre exercise assessment blood pressure was 122/85. A musculoskeletal screening assessed for joint mobility and range of motion globally, noting reduced range bilaterally on cervical spine rotation, bilateral wrist flexion and extension, and left knee extension, secondary to mild osteoarthritis (OA) of this knee.

How was the personalised exercise prescription designed for this AF patient

There are currently no American College of Sports Medicine (ACSM) ‘FITT’ (Frequency, Intensity, Time, and Type) recommendations explicitly for AF. As such, the ACSM FITT guidelines for individuals with cardiovascular disease were applied. The exercise prescription in this case had four key component parts; aerobic, strength training, flexibility, and neuromotor (agility/co-ordination/balance).

Aerobic – three-to-five days per week at an intensity of eight-to-12 on RPE Borg scale. The aerobic activity was not lower than 15-minute bouts in duration. Given the presence of OA in the left knee, aerobic work was encouraged through a mixture of cycling, swimming, and elliptical trainer initially to reduce weight-bearing load through the knee. A Polar H10 Heart strap, an Apple smart watch, and a familiarisation with the RPE Borg scale ensured effective and safe monitoring were all used to assist the patient when he was exercising alone.

Strength training – a minimum of two sessions per week with 48-hours rest between sessions. Initially, the patient worked at 50-to-60 per cent of calculated one rep max, using eight major muscle groups. The patient did these sessions in the clinical setting supervised by a chartered physiotherapist.

Flexibility – static stretches for all major muscle/tendon groups. These were performed approximately three times per week by the patient.

Neuromotor – the patient had no identified balance issues on initial assess-ment. As such, the neuromotor aspect of the programme initially included single-leg strength training to improve function in the compromised left knee. After six weeks of dedicated strength training, increased weight-bearing through the left knee (and all weight-bearing joints) was performed using a series of ‘SAQ’ (speed, agility, quickness) drills using indoor ladders. This was goal-specific training as the patient wished to return to playing doubles tennis for the first time in nine years.

A 61-year-old male was referred for a clinical exercise prescription (October 2021) by a clinical nurse specialist in cardiology. The man had been diagnosed with atrial fibrillation (AF) nine years previously in his early 50s following an acute onset with no prior cardiac history. He is currently non-symptomatic, but has long standing persistent AF. He reports weight gain, increased levels of fatigue and lethargy, and is finding previously simple tasks (walking up an incline near his home) more difficult. His daughter’s wedding was coming up in six months’ time and he was very keen to enjoy that day without having to manage fatigue or knee pain. As such, he was motivated to make some lifestyle changes. From a musculoskeletal perspective he was undergoing orthopaedic review for an arthritic left knee and was also finding this a significant barrier to activity levels.

Prior to his AF diagnosis the patient had an uneventful medical history and was initially shocked and disappointed with the diagnosis. He felt in reasonable health and was not on any medications. Indeed his activity levels were self-reported as ‘moderate’, playing tennis and golf intermittently and walking regularly with his wife. His work in the corporate sector during that period was stressful due to the economic crash of 2007. Unwittingly, he had increased his weekly intake of alcohol over a number of years, accompanied by casual smoking, and his first episode of AF was associated with an alcohol-related binge. He presented to an emergency department with a sense of fluttering or thumping in his chest and associated shortness of breath and weakness. He was fearful he was having a heart attack. Initially, once a myocardial infarction had been ruled out, an arrhythmia was detected on 12-lead ECG. After a cardiology review he was diagnosed with AF and given a cardioversion within 48 hours, whereby his heart initially returned to sinus rhythm. He was discharged immediately post-review with a six-week follow-up with the cardiologist. In March 2020 the patient had a catheter ablation procedure, which restored normal sinus rhythm for nine months.

Initially the diagnosis of AF and the urgency of cardioversion treatment gave the patient a significant fright. Without any previous medical history of significance it was a trigger for a period of introspection and evaluation. The patient was keen to embark on a healthy regime, including changes to diet and activity levels. He was initially referred to a cardiac rehabilitation programme. With no history of cardiac muscle damage and no infarct, the patient was encouraged to focus on cardiac risk modifications, such as reducing his BMI, improving his cholesterol profile, small dietary changes, and smoking cessation. Post discharge he recommenced regular walking with his wife, but was guarded about intensity levels and fearful to take on any activities that were deemed to be ‘vigorous’. He gave up playing tennis in the following months and started to miss out on some social events with friends, which did not help his mindset. Ultimately low mood precipitated more frequent alcohol-related binges and the man had a second acute episode of AF within 12 months of his first cardioversion.

After a 12-week personalised exercise prescription the patient made statistically-significant improvement in almost all areas measured. A key achievement was his weight loss of nearly 6kg, which will help improve his cardiovascular health, and has reduced weight-bearing load through his problematic knee. Knee pain was significantly reduced as per the Western Ontario and McMaster Universities Osteoarthritis (WOMAC) index. Cardiorespiratory fitness had improved significantly, meaning the patient was now considered ‘above average’ as per age-related normative data. The patient has reduced alcohol intake per week and made some gradual changes to his diet. He is still smoking. As expected there is no change to his AF status, however, he is considerably fitter than previously. He is scheduled for an upcoming review with his cardiologist. If he can quit smoking he is hopeful he may be appropriate for a second ablation surgery in his bid to return to sinus rhythm. He is back playing doubles tennis and is looking forward to dancing at his daughter’s upcoming wedding.