The introduction of robotic prostate surgery at Galway University Hospitals 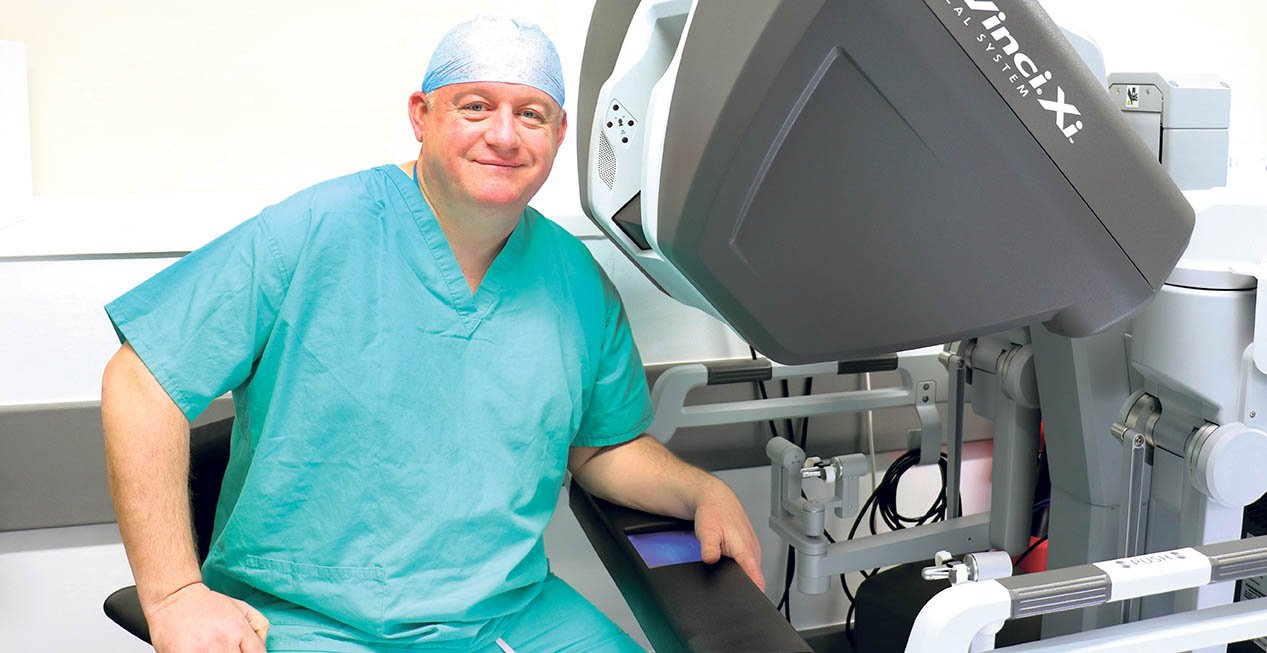 The introduction of robotic surgery in GUH is a major benefit for prostate patients, writes Mr Paddy O’Malley

In July of last year the first robotic-assisted radical prostatectomy was performed on a patient at Galway University Hospitals (GUH) by Mr Paddy O’Malley, Consultant Urologist and specialist in robotic surgery, GUH. This was a cumulative effort of patient requirements, local surgical expertise, the hospital executive, finance department and the theatre administration. Significant planning and preparation was necessary for the installation of the da Vinci Xi robotic system into the hospital, but many factors were in favour of this becoming a reality. Over 70 men have been successfully treated to-date by Mr O’Malley and his colleagues Mr Garrett Durkan and Ms Catherine Dowling.

Robotic-assisted radical prostatectomy is now by far the commonest surgical method used in the surgical treatment of prostate cancer. The debate is over with regards to the superior outcome for patients with this technology. In excess of 90 per cent of men who underwent curative surgery for prostate cancer in the US last year had robotic-assisted surgery performed. One-third of American hospitals possess at least one surgical robot. In 2017, 693,000 robotic-assisted surgical procedures were performed in the US alone.

This technology is here to stay for many reasons but superior outcomes for patients is by far the most important. Due to the high initial capital costs this surgical approach was previously only available to men with private health insurance, but now with robotic platforms being introduced into public hospitals, all patients can benefit from this technology. GUH is one such example hoping to operate on 150 men this year.

GUH is a National Cancer Control Programme designated prostate cancer treatment centre. Through the Rapid Access Prostate Cancer Clinics, men who are diagnosed with prostate cancer are counselled regarding treatment. For the men where surgery is indicated robotic-assisted radical prostatectomy is now available.

The story of robotic surgery in Ireland has its origins in Galway city explains Mr O’Malley: “I returned from training in robotic surgery in Melbourne in 2007 and began working in the Galway Clinic. I was able to convince the CEO at the time Mr Jimmy Sheehan that robotic-assisted surgery was the future. The Galway Clinic purchased a da Vinci robot and I performed the first robotic-assisted radical prostatectomy in Ireland in 2007. That programme remains very successful, but with my appointment to GUH in 2012 I could see the increasing number of men that could benefit from this technology. Along with my colleagues in the Galway Clinic and GUH we developed a service level agreement whereby men diagnosed with prostate cancer at GUH and who were suitable for surgery could avail of robotic-assisted surgery at the Galway Clinic. This was a very successful public/private partnership that has been replicated elsewhere in the country and is a model that should be expanded to other specialities.

“Following the success of this project it was decided to purchase a da Vinci Xi robotic platform for GUH. This took a combined effort from hospital administration, surgical and nursing colleagues along with our finance department. We were also in a unique situation in that we had successfully applied to Cancer Care West for funding assistance. This monetary assistance from our local cancer charity was critical in finalising the purchase. Their affiliation to this project is enormous. In my opinion the introduction of robotic surgery to GUH is the single most important development in the treatment of prostate cancer in the west of Ireland.”

The advantages of robotic assisted radical prostatectomy can be divided into advantages for the patients and the surgeon. From the patients’ perspective this surgical approach has significantly reduced the length of hospital stay. Patients who undergo robotic-assisted radical prostatectomy are discharged 48 hours following the procedure. This reduces the hospital stay by three-to-four days compared to an open surgical approach. The overall effect by reducing hospital stay will allow more surgeries take place in a particular time frame and also eases pressure on hospital elective admissions.

Robotic-assisted radical prostatectomy with the da Vinci Xi model is performed through four 8mm port sites. These ports house the robotic camera and surgical instruments. An additional 10mm port is used to introduce sutures and haemostatic clips during surgery. The absence of a large surgical incision enhances recovery and results in less post-operative pain. The majority of post-operative patients will require oral analgesia only. Less post-operative pain allows earlier mobilisation and reduces the risks of thromboembolic events and infection.

There is minimal risk of significant blood loss with robotic-assisted radical prostatectomy. The use of pneumoperitoneum and the accurate haemostasis possible results in small volume blood loss. Patients very rarely will require blood transfusion, which again enhances the recovery period and reduces costs.

Quicker recovery allows patients to spend less time in hospital and return to normal activity including work in an accelerated time frame compared to an open surgical approach.

The advantages of the technique that benefit the surgeon are technological. The current Xi system uses 3D vision of the surgical field. This can be magnified up to 15 times normal, allowing precision anatomical identification. This also allows depth perception of the surgical wound, which is not possible with conventional laparoscopic camera systems. The surgeon has complete control of the camera, which is stable within the robotic arm. A simple clutching manoeuvre allows the surgeon to switch from the instruments to the camera control adjusting the camera position during the operation.

The robotic surgical instruments contain an EndoWrist working element. This allows the exact movements of the surgeon’s hands to be translated to the operating site via the robotic/computer interface. This is done in a completely intuitive manner removing the fulcrum or ‘chopstick’ effect. It is thought that this technology allows transfer from open surgery to robotic surgery to be more natural than the change from a conventional laparoscopic technique.

Coupled with the 3D camera vision there is a motion scaling effect also. This can be graded depending on the procedure. For example, a 5cm hand movement can be scaled to a 1cm robotic instrument movement (5:1). This scaling can be changed during a case to suit the surgical requirement. Whilst sitting at the surgical console the surgeon is in a better ergonomical position and can operate without any physiological hand tremor being transferred to the instruments.

The criticism of robotic-assisted surgery is mainly directed at the cost involved. It is true that a €2.3 million capital outlay cost is high but it has been proven that high volume centres, such as GUH, who perform more than 140 cases per year will do so cost neutral compared to conventional surgery. There is the added maintenance contract of €150,000 per year, which is essential for the guaranteed running of the system with 24-hour technician availability. Poorly informed commentary on robotic surgery is unfortunate.

New medical technology is often slowly accepted but robotic surgery has been strenuously tested and compared to other modalities of surgery. Criticism of this technology is often provided by those not fully familiar with the training, standards and governance involved in running a successful programme.

In terms of the institution the real benefit arises from the use of this technology by other specialities. Surgeons in other specialities who are fully trained in robotic surgery can adopt this equipment to their own practice in the future. The gynaecology department are due to commence their own robotic programme at GUH. Colorectal, ENT and maxillofacial surgery will also commence robotic surgery in the near future. Increasing numbers of patients will benefit now that this technology is available.