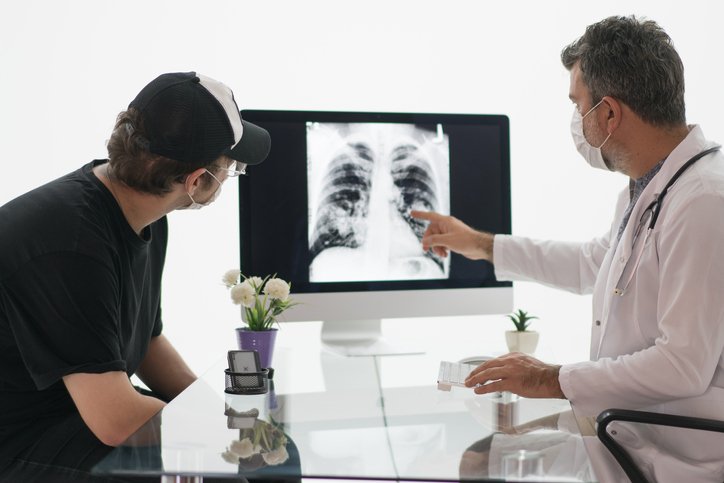 Mature male doctor looks at a radiograph of a chest with his patient on her desktop computer.

In Ireland, lung cancer remains the most common cause of cancer-related deaths and accounts for more deaths per year than breast and prostate cancers combined

Lung cancer remains the most common cause of cancer-related death in Ireland. During the period 2015-2017, there was an average of 1,884 deaths per year with 20 per cent of deaths in women and 22 per cent in men. Furthermore, projected cancer incidence rates for Ireland between 2015 and 2045 suggest that the annual number of lung cancer cases will increase by 131 per cent in males and by 105 per cent in females. Approximately 70 per cent of lung cancers are diagnosed with advanced disease (Stage IIIB-IV).

As such, effective prevention measures and early diagnosis are significantly warranted. The advent of targeted therapies and more recently, immune-checkpoint inhibitors, in the management of advanced stage lung cancer has led to improved survival outcomes. While these therapeutic approaches have shown benefit in a small patient subset, those with a diagnosis of early-stage lung cancer are amenable to surgical resection with curative intent. As such, patients with an early diagnosis of lung cancer have better survival outcomes.

Data from several studies have now been published supporting the use of low dose CT (LDCT) lung cancer screening as a key strategy in the early detection of lung cancer in high-risk asymptomatic individuals and thus, increasing survival outcomes. In one of the first of these studies, data from the randomised National Lung Screening Trial (NLST) in the US were published in 2011. With over 53,000 participants at high-risk of lung cancer across 33 medical institutions in the US, a significant 20 per cent reduction in lung cancer mortality in high-risk current and former smokers was reported in the LDCT group compared to those screened using single-view chest radiographic imaging.

The study also reported a high rate of adherence to screening of 90 per cent during the annual screening of participants over three years. Of interest, data from the NLST reported that compared to normal lung screening results, receiving any screen-detected abnormality significantly increased smoking cessation among participants.

In 2020, the US Preventive Services Taskforce (USPSTF) issued a draft recommendation statement, expanding on its initial recommendation of 2013, for annual LDCT lung cancer screening in adults aged 50-to-80 years who have a 20-pack year smoking history and who currently smoke, or have quit within the past 15 years. The taskforce recommended that screening be discontinued once a person has not smoked for 15 years, or develops a health problem that substantially limits life expectancy or the ability or willingness to undergo curative lung surgery.

Nine years following the NLST, results from the Dutch-Belgian NESLON trial were published based on a 10-year follow-up on LDCT screening, primarily in men, due to the low number of women participating in the trial. As the largest European lung cancer screening trial involving over 15,000 participants, this randomised controlled study confirmed a reduction in lung cancer mortality by 26 per cent in men and between 39-to-61 per cent in women.

Participants in the NELSON trial were screened at baseline with follow-up LDCT screening at one, three, and 5.5 years compared to no screening. At a screening interval of 2.5 years, the number of interval cancers and stage II-IV lung cancers detected was higher than those detected at annual and biennial screening. The overall smoking quit rate at two years follow-up was 16.6 per cent compared to a background population rate of 3-to-7 per cent.

In this trial, at baseline, lung cancer was detected in 1.7 per cent of participants in the LDCT arm, compared to 1.03 per cent and 0.9 per cent reported in the NLST and NELSON trials, respectively. Participants who received a positive screening result were significantly more likely to quit compared to those in the control group and those receiving a negative result.

While both the NLST and UKLS trials provide evidence on the effects of screening on smoking cessation among participants, trial data also suggested that current smokers and individuals from lower socioeconomic groups were less likely to participate. In the NLST analysis, individuals were significantly more likely to quit smoking if abnormal findings were reported in the previous year’s screen.

These findings from LDCT lung cancer screening trials in the US and Europe have fuelled significant interest among lung cancer experts to advocate for the implementation of LDCT lung screening in Europe. This, however, would require a prior analysis of the potential economic impact, in addition to the formulation of guidelines for its implementation and addressing potential challenges or outstanding issues. In doing so, a number of reports have been published to date highlighting such challenges and addressing these with potential solutions as part of implementing a lung cancer screening programme within Europe. One of these reports was the European Position Statement on Lung Cancer Screening and the 2017 EU Policy Document on Lung Cancer Screening.

More recently, following a roundtable discussion by an expert panel reviewing the current evidence for LDCT lung cancer screening, a number of recommendations were proposed for screening to be implemented effectively. Additional levels of evidence for the implementation of lung cancer screening in Europe were identified (Figure 1) in line with previous data reported from the Liverpool Healthy Lung Programme. In this study, it was found that community targeted interventions could contribute to the improvement of the population’s health, lifestyle, and life expectancy, in addition to a reduction in health inequalities in health-deprived areas where LDCT lung cancer screening was implemented.

The Initiative for European Lung Cancer Screening carried out a comprehensive review of the literature on LDCT lung cancer screening based on which a number of recommendations were also proposed. These recommendations, together with those proposed by Field JK and colleagues are shown in Figure 2.

In a recent comparative analysis of lung cancer policies across the EU, the Economist Intelligence Unit examined the burden of lung cancer in Europe and how countries are responding to this challenge. Included as part of these analyses, was a focus on early detection and lung cancer screening. Using an evidence-based approach, no data was found to show that Ireland had conducted a lung cancer screening study or trial unlike many of its European counterparts (Croatia, Czech Republic, Denmark, France, Germany, Hungary, Israel, Italy, Poland, Russia, and UK) where lung cancer screening programmes or trials have been initiated to some degree.

In the most recent HSE National Cancer Strategy, which maps a route for cancer care in Ireland over the next decade (2017-2026), lung cancer screening was not addressed. Furthermore, in the most recent of published reports (2008-2010) of the Board of the National Cancer Screening Service (NCSS), it was highlighted that significant policy development work and review of the potential benefit of a national lung cancer screening programme in Ireland was under consideration. While this was alluded to in the context of lung, prostate, and bladder cancer, there was unavailable and insufficient evidence available at the time of publication of the report to recommend a population-based lung cancer screening programme.

With the recent recommendations for the implementation of LDCT lung cancer screening at European level based on findings from recent international and European randomised trials, these data may now provide more compelling evidence for the National Screening Advisory Committee to revisit the introduction of a lung cancer screening programme in Ireland. In 2019, the Irish Cancer Society published its Lung Cancer Action Plan. In doing so, it recommended that the Irish Government works with its European counterparts for the establishment by the European Commission of an EU Expert Group on Lung Cancer Screening.

Additional recommendations included the monitoring by the NCSS, National Cancer Control Programme (NCCP) and Department of Health of the progress of lung cancer screening programmes in other European countries and ensuring that adequate healthcare resources and infrastructures are in place to support increased referrals to Rapid Access Clinics as a result of a screening service. A National Screening Advisory Committee should also be constituted to advise on any new proposals for a lung cancer screening programme in Ireland, as recommended in the Report of the Scoping Inquiry into the CervicalCheck Screening Programme by Dr Gabriel Scally in 2018.

The Action Plan also outlined the need for pan-European collaborations between the European Commission and the Irish Government in developing best-practice guidelines and quality assurance programmes as part of the screening process. While Ireland may still be sitting on the fence, policymakers, stakeholders, the NCSS, NCCP and the Department of Health must start to take action and join its European neighbours in addressing the next steps in preparation for the roll-out of a targeted or pilot lung cancer screening programme, one that we now know can potentially save lives (Figure 3).

Evidence now exists supporting the implementation of safe and effective LDCT lung cancer screening programmes in Europe with the aim of improving early diagnosis and reducing mortality. In Ireland, lung cancer remains the most common cause of cancer-related deaths and accounts for more deaths per year than breast and prostate cancers combined. When cancers are diagnosed at stages I and II, survival outcomes are considerably better than for patients diagnosed with advanced disease (stage III-IV).

The lung cancer community in Ireland must now work towards implementing research for a lung cancer screening trial or pilot study guided by European and international data. This in turn, will direct national policymakers in designing the most appropriate lung cancer screening initiative that is cost-effective for our healthcare system and most importantly, reduces lung cancer mortality rates on our island.