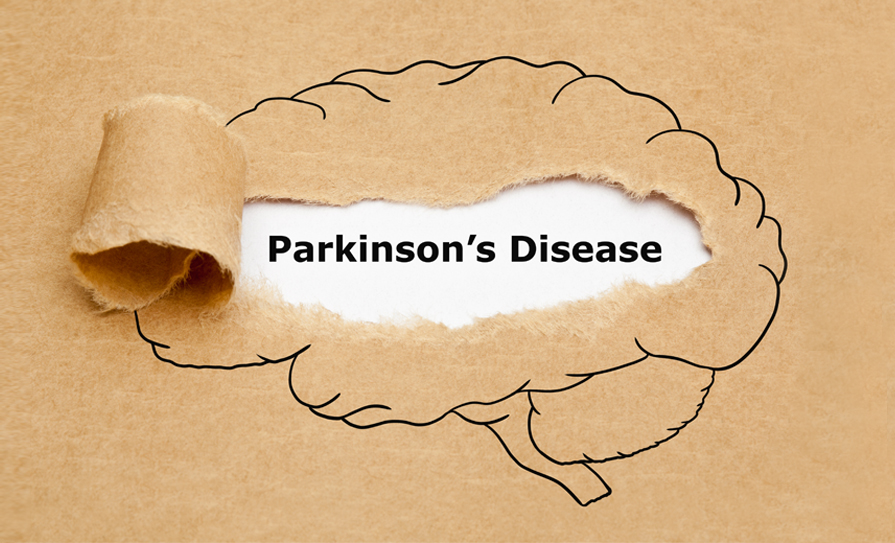 Idiopathic Parkinson’s disease (IPD) is a common, progressive, neurodegenerative disease, which affects 1 per cent of the population aged over 60 years

A 55-year old man presented with a tremor which affected his right arm at rest. He had also noticed that his jogging had become slower and dancing, which he had previously enjoyed, was more difficult as he had “lost his rhythm”. He reported episodes over the preceding 10 years where he would seem to re-enact his dreams, often crying out or thrashing about in his sleep as if fighting or running. There was no family history of neurodegenerative disease or tremor. He had never been treated with antipsychotic or anti-emetic therapies. His examination revealed reduced facial expression, a coarse resting tremor of his right arm, mild rigidity of the right upper limb, and slowness of rapidly alternating movement on the right, with a progressive reduction in the amplitude of movements.

An MRI of brain with susceptibility-weighted sequences was normal.

The patient was given a diagnosis of IPD based on the MDS Diagnostic Criteria for Parkinson’s Disease 2015. Following a discussion regarding the risks and benefits of treatment options including deferring medical treatment, monoamine oxidase inhibitors, dopamine agonists, and levodopa, he was treated with extended-release ropinirole; starting at a dose of 1mg once per day, titrating up to 8mg per day.

Idiopathic Parkinson’s disease (IPD) is a progressive, neurodegenerative disease characterised by cardinal motor features: rest tremor, rigidity, bradykinesia, postural instability, flexed posture, and freezing. A wide range of non-motor symptoms are described in IPD including fatigue, sleep disturbance, drooling of saliva, urinary dysfunction, skin changes, postural hypotension, and neuropsychiatric problems including cognitive impairment, anxiety, depression, apathy, and psychosis. IPD is highly heterogenous, with clinical manifestations varying widely between patients and over the time course of the disease. As a result of this, a range of therapeutic options must be considered to optimise function and quality-of-life for people with IPD.

Diagnosis of IPD is based on clinical assessment and therefore estimates of incidence and prevalence vary depending on the diagnostic criteria and epidemiologic methods used. IPD is the second most-common neurodegenerative disease of ageing (Alzheimer’s disease is the most common) with a prevalence of 0.3 per cent in the general population, rising to 1 per cent in people over 60 years of age. Prevalence and incidence of IPD is 1.5-to-two times higher in men than women, which may be related to the effect of oestrogen on striatal dopamine levels.

Despite increasing interest in biochemical and imaging biomarkers, IPD remains a clinically-defined entity. Due to the heterogeneity of IPD, presentations and clinical overlap between IPD and other neurodegenerative parkinsonisms (eg, DLB, MSA, CBS, and PSP) it is impossible to make a diagnosis of IPD with certainty during life. Therefore several diagnostic criteria have been proposed to aid the clinical diagnosis of IPD; the most recent guidelines from the Movement Disorders Society Clinical Diagnostic Criteria were published in 2015. These guidelines allow for a diagnosis of ‘clinically established PD’ based on the presence of parkinsonism (defined as the presence of bradykinesia with either rest tremor, rigidity, or both), the absence of exclusion criteria or red flags, and the presence of two supportive criteria, while ‘probable PD’ can be diagnosed in the presence of red flags which are counterbalanced by supportive criteria (Table 1). One notable alteration made by these criteria is the removal of early cognitive impairment as an exclusionary criterion and the inclusion of the category of ‘PD (Lewy body dementia subtype)’ to accommodate DLB.

The correlation between clinical diagnostic criteria and pathological diagnosis at autopsy remains imperfect, and it is hoped that in future biochemical biomarkers may provide insight into pathological processes while patients are living.

Treatment of early- to moderate-stage IPD

Treatment of IPD is complicated. Some patients will have a tremor-predominant phenotype, some prominent postural and gait abnormalities, and some will have a mixed phenotype with additional non-motor features. The individual response to dopaminergic therapy varies, as does the tolerability of medications. All patients with PD require an individualised approach to management with multidisciplinary input including physiotherapy, occupational therapy, speech and language therapy, general practice, and neurology/medicine for the elderly expertise. Patients may also require support from psychology, psychiatry, gastroenterology, and neurosurgical services.

Exercise plays an important role in maintaining strength and mobility in PD. Regular, consistent exercise is likely to be more effective than targeted, intense bursts. Speech and language therapy, in particular Lee Silverman Voice Treatment (LSVT), may help with hypophonia.

Where tremor is the predominant or only troublesome symptom, anticholinergic treatment may be helpful, but this has limited impact on non-tremor symptoms and its attendant side-effects of dry mouth, constipation, sexual dysfunction, and confusion can be difficult to tolerate, particularly in older patients or those with early cognitive involvement.

MAOB–I such as selegiline and rasagiline give a minor symptomatic benefit and may be sufficient in very early disease. There is some evidence to support neuroprotective effect of MAOB inhibition, but interpretation of these trials is complicated by the long-lasting symptomatic effect of the medications.

Dopamine agonists are the second-most symptomatically effective treatment and offer the advantage, especially in younger patients, of postponing use of levodopa and the complications of prolonged levodopa use, such as dyskinesia and motor fluctuations. The use of dopamine agonists is complicated by side-effects including hypersomnolence, orthostatic hypotension, and impulse control disorders. Dopamine agonists are available in modified-release preparations that allow them to be take once per day or via a topical patch.

Exogenous levodopa, the immediate precursor to dopamine, is the most powerful drug available to counter the motor symptoms of PD. Levodopa has a short half-life, of approximately 90 minutes, and is usually given three-to-four times per day. Common early side-effects include nausea and light-headedness, while prolonged use is associated with the development of dyskinesias and motor fluctuations.

The case study patient in this article also describes symptoms consistent with REM sleep behaviour disorder (RBD), which is a common finding in IPD. RBD can precede the motor symptoms in IPD by many years (so-called prodromal PD). Treatment is indicated when symptoms are disruptive of sleep or if there is a risk of the patient injuring themselves or their bed partner. Melatonin starting at 2mg od and increasing in 2mg increments or clonazepam 0.5mg nocte may be helpful.

The patient was initially treated with ropinirole with a significant improvement in his mobility. He continued to attend the neurology clinic over the following 10 years. After three years, increasing bradykinesia led to the decision to begin levodopa treatment and over the following several years his levodopa dose was increased until he was taking two tablets of carbidopa/levodopa five times per day. When he attended clinic he complained that symptoms of uncomfortable stiffness and slowness recurred 45 minutes prior to his next scheduled dose. He also complained of troublesome dyskinesias, which occurred 30 minutes after each dose and lasted up to an hour.

Prolonged use of levodopa to treat the symptoms of parkinsonism results in treatment-associated complications such as motor fluctuations and dyskinesias. Risk factors for the development of these complications include younger age at onset, high levodopa dose, low bodyweight, use of entacapone in addition of levodopa, female gender, and more severe UPDRS score.

‘Wearing off’ describes the gradual return of parkinsonism with falling plasma concentration of levodopa. Problematic variations include ‘sudden offs’ (rapid onset of ‘off’ symptoms), ‘random offs’ (return of symptoms is unpredictable), ‘super offs’ (severe ‘off’ symptoms occurring at the start of the day). Motor symptoms during ‘off’ periods are also associated with non-motor symptoms which may include pain, depression, anxiety, drenching sweats, abdominal bloating, and dyspnoea. Dyskinesia in IPD typically refers to choreiform movements associated with higher levodopa levels. Although patients complain of dyskinesia less than they do of ‘offs’ (indeed, movements may be entirely unnoticed by the patient), it can be uncomfortable, exhausting, and socially embarrassing. Diphasic dyskinesia, or dyskinesia-improvement-dyskinesia (D-I-D) syndrome, refers to dyskinesias, which develop as the patient enters the ‘on’ phase, then abate as the levodopa levels increase and recur as the patients enters the ‘off’ phase. Diphasic dyskinesias may respond to higher doses of levodopa.

In treating worsening motor symptoms, it is worthwhile first to consider complicating factors, which may be exacerbating symptoms. Food, especially protein, can interfere with the absorption of levodopa so it is important to check that medication is being taken on an empty stomach (usually 30 minutes before or 60 minutes after a meal). Constipation may reduce the efficacy of dopaminergic treatment and should be treated. Pain, depression, poor or disturbed sleep, and concomitant illness or infection can exacerbate symptoms of PD.

Various strategies may be tried to achieve more consistent levels of plasma levodopa and reduce wearing-off. Increasing frequency of dosing may be tried, but this frequently leads to more rapid fluctuations and is unlikely to yield sustained benefits. The addition of a COMT (catechol-o-methyl transferase) inhibitor such as entacapone inhibits the peripheral breakdown of levodopa and prolongs its effects, however, this may increase the likelihood of peak dose complications such as confusion and dyskinesia. The addition of a MAOB–I or a dopamine agonist (already in place in the case study patient) may be considered, but their utility may be limited by associated side-effects.

Amantadine may be useful in treating peak dose dyskinesia, although its utility may be limited by side-effects including confusion and hallucinations.

Continuous administration of dopaminergic medications may help to ameliorate fluctuations in response. Apomorphine is a potent dopamine agonist, which may be given via a continuous subcutaneous pump. This treatment can reduce the number of ‘off’ periods, but potential complications include nausea, vomiting, and hypotension, as well as hallucinations, delusions, and
impulsive behaviours.

Continuous infusion of carbidopa/levodopa gel via a PEG tube with a jejunal extension (PEG-J) is an additional strategy, which may help to ameliorate motor fluctuations.

For selected patients with troublesome motor fluctuations, dyskinesia, and/or treatment-resistant tremor and good cognitive function, deep brain stimulation (DBS), typically targeting the subthalamic nucleus or globus pallidus pars interna, is a potentially useful therapeutic strategy. Patient selection is key to delivering good outcomes. Criteria include five years of duration of PD (to allow time for features of atypical parkinsonism to emerge and assess response to dopaminergic medications), dopamine responsiveness (>30 per cent improvement in UPDRS), absence of dementia and depression, good cognitive function, and few comorbidities. Recently, there has been interest in using DBS earlier in the disease course, hoping to achieve improved quality-of-life and motor symptom control with lower doses of levodopa. Potential complications include dysarthria, worsening gait, cognitive dysfunction, and intracranial haemorrhage. Since January 2022, this procedure is available in Ireland and is accessed through the National DBS Service at the Mater Misericordiae University Hospital, Dublin, with surgeries taking place in Beaumont Hospital, Dublin.