Which political party will be back-pedalling on promises to cyclists? 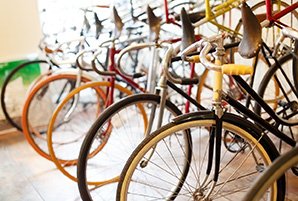 Bicycles parked in a bike shop

As the dust settles on the general election and deals are being done in smoky rooms, it’s tempting to take a look at the pre-election promises that were made by the various parties, most of whom had their posteriors handed to them by the electorate in favour of Sinn Féin.

One in particular stood out. First of all, many people have a particular stance on cyclists — some perceive them as a nuisance on the road, others cycle and feel the same about motorists, and a minority don’t really care either way. I am both a cyclist and motorist and really, the ability to use the road like a buffoon is not exclusive to either group, as both have the capacity for idiocy. Not to mention pedestrians, particularly the ‘smartphone zombies’ who wander out in front of traffic while texting. Don’t worry folks, there’s plenty of stupidity to go round all the factions on our highways and byways.

Anyway, journal.ie took the pulse of the political parties before the vote to see where they stood on the issue of the safety of cyclists in Ireland, or the lack thereof. I will limit the references to a ‘spokesperson’ as much as possible.

The parties were asked a number of questions, including how they would improve cycling infrastructure, safety, theft, and how willing they would be to allocate funding for these issues if they were elected.

The answers were mostly predictable: Sinn Féin committed to more cycle lanes, therefore encouraging more people to commute by bike. Labour were more specific, saying they would put aside 20 per cent of the national transport budget  to cycling and walking infrastructure, while Fine Gael issued a woolly statement about “a massive increase for sustainable transport modes by 2035” (getting a bit ahead of yourselves there, as it turned out).

The promises from almost all parties were plentiful, figures were picked out of the air and there were pledges from all parties to expand bike schemes, create more cycle lanes, upgrade surfaces, more bike sheds for greater security, support the national Greenways strategy, appoint ‘cycling officers’ (whatever they are), build ‘cycling plans’, clamp down (literally) on cars parked illegally in cycle lanes, more gardaí to round-up bicycle thieves, eliminate world hunger, and so on and so forth.

But the most startling response came from Renua and its party Chairman Mr Séamus Ó Riain, who had other priorities on his mind. He told the publication that cycling considerations were “not top of our priorities” against the backdrop of violence at the time in Co Cork and Co Louth.

“A young man was chopped-up and put into plastic bags in Drogheda. Another was stabbed to death in Cork.”

And then he delivered a line that’s hard to forget: “You’ll have to forgive us, but worrying about how the average metrosexual cycles to work at Google is not top of our list of priorities.”

Whatever emerges from the Frankenstein’s monster of a Government that will be patched together, time will tell if he was the only one who was actually telling the truth.

Of course, more cyclists and pedestrians would be a welcome counter-balance against the obesity epidemic, so let’s hope whoever is in power puts their money where their mouth is. Here are a couple of brief gags on cycling and cyclists to finish off. I am always glad to receive any comments, opinions, contributions or jokes to info@mindo.ie.

A priest on a bicycle is stopped by a guard one night for having no back light on his bicycle. The priest remonstrates, “I have the Lord with me, I don’t need a back light”. The guard replies, “two on a bike as well, that’s another offence”.

“Since things turned sour with my (wife/husband) a fortnight ago, I’ve taken to riding 50 miles a day to clear my head. I’m now 700 miles from home and feeling much happier.”

“I’ve really had it with my dog,” says one man to his neighbour. “He’ll chase anyone on a bicycle.” The neighbour replies, “Hmmm, that is a problem. What are you going to do about it?” to which the first man replies, “I guess the only answer is to confiscate his bicycle.”