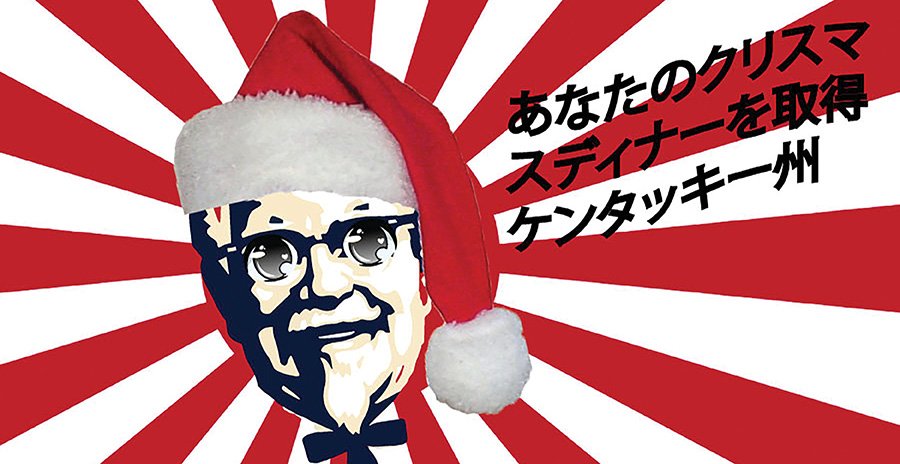 It’s that time of year again — some love it, others hate it and some are indifferent. For many, it’s a source of stress and financial pressure. No doubt there are studies to indicate the rates of myocardial infarction during the festive period but for this offering, we’ll take a breather from death, disease and health topics generally and keep it light and breezy.

In the Venezuelan capital of Caracas, for example, it’s an established tradition to make your way to Christmas morning mass on roller-skates — the city’s streets are even closed to traffic from 8am on Christmas morning to ensure safe passage for the skaters. That’s just how they roll in Caracas.

In Japan, meanwhile, marketing tsars launched an advertising campaign (pictured) with the slogan Kurisumasu ni wa kentakkii! in 1974, which translates as ‘Kentucky for Christmas!’ It was a smash hit — even today, despite the fact that Christmas is not traditionally celebrated there, you can expect to pay around €20 for Christmas dinner in a Japanese KFC, but be prepared for queues that are regularly out the door.

In Italy, Christmas is celebrated on 5 December. One of the traditions there is to have a visit on the previous evening from Belfana the Witch to fill children’s stockings and load them up with candy if they are on the ‘Nice List’. Like Santa, she also enters through the chimney but instead of milk and cookies, Belfana’s gifts include wine and local delicacies.

In South Africa, rather than turkey and ham, a much-loved morsel is fried caterpillar. But not just any caterpillar — you would be tucking into the Pine Tree Emperor Moth, a festively-festooned red and green creature that is reputed to bring the diner good luck for the year ahead.

But I’ll leave you with my favourite brief Christmas story ever from the legend that is Spike Milligan. One year, one of his then-young children wrote a letter to Santa, asking for some particular presents and complaining that “my brother doesn’t believe you exist”.

The letter continued: “Santa, can you please beat up my brother because he doesn’t believe in you. PS: I left a hammer under his bed for you.”

In honour of the season, here are a few quick Christmas jokes to finish off this issue’s instalment. I am always glad to receive any comments, opinions or contributions to info@mindo.ie. And to all our readers, sincere wishes for a happy, healthy, stress-free Christmas and New Year.

It was just before Christmas and the magistrate was in a happy mood. He asked the prisoner who was in the dock, “what are you charged with?”

The prisoner replied, “doing my Christmas shopping too early”.

“That’s not a crime,” said the magistrate, scratching his head. “Just how early were you doing this shopping?”

“Before the shop opened,” answered the prisoner.

Santa’s Privacy Policy: At Santa’s Workshop, your privacy is important to us. What follows is an explanation of how we collect and safeguard your personal information.

Why do we need this information? Santa Claus requires your information in order to compile his annual list of who is naughty and who is nice and to ensure accuracy when he checks it twice.

What information do we collect? We obtain information from the unsolicited letters sent to Santa by children all over the world listing specific items they would like to receive for Christmas. Often, these letters convey additional information, such as which of their siblings are ‘doody-heads’. The letters also provide another important piece of information — fingerprints. We run these through databases maintained by the FBI, CIA, NSA, Interpol, MI6, and Mossad. If we find a match, it goes straight onto the Naughty List.

What do we do with the information we collect? Sharing is one of the joys of Christmas. For this reason, we share your personal information with unaffiliated third parties: The Easter Bunny, the Tooth Fairy, and Hanukkah Harry.