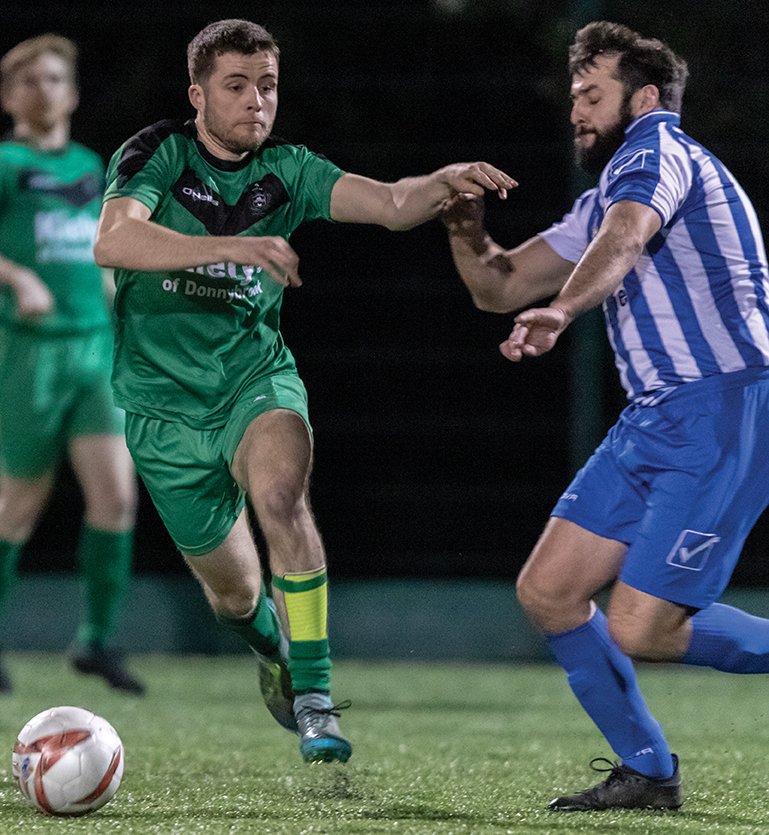 St Vincent’s slugged it out against quality opposition for the majority of a tightly-contested affair, but conceded late to suffer a 0-1 defeat to Verona FC. Despite being on the back foot for long periods, the home side defended stoutly and were bitterly disappointed to let a point slip away in the closing stages. Coming out on the wrong end of close encounters has plagued the doctors this season, and is one of the primary reasons why the team is in the midst of a relegation dogfight.

Due to a late scheduling issue, the game was played at Crumlin United’s fantastic all-weather venue. Despite some showers earlier in the day, the wind and rain cleared up to leave ideal footballing conditions.

Due to a late season injury crisis, a number of player combinations were being tried out for the first time. There were some predictable teething issues, which allowed Verona to dominate the opening period of play. The visitors were well organised and clearly used to playing with each other regularly. Fast, direct build-up play created problems for the home defenders to deal with.

Barra Neary and Kieran Keane fortified the middle, while Darren McMahon and Paddy O’Connor protected the wings. Clear chances never materialised, though Sean Keane was called upon to make a few smart saves. As Verona pressed higher in search of an opener, Vincent’s began to look dangerous on the counter. Aidan McGrath and Fionn Lynch had a couple of sights at goal, but never seriously troubled the opposition keeper. Goalless at the interval.

The second period followed a similar pattern to the first. Verona looked comfortable in possession and moved the ball well between defence and attack, but lacked the cutting edge up front needed to seriously threaten the Vincent’s goal. Vincent’s found it hard to keep hold of the ball.

John Cosgrove, Mark Dwyer and Kevin Nally worked tirelessly in midfield, but Verona pressed in packs and ensured time was at a premium. Starved of regular service, the top three worked tirelessly but struggled to establish themselves. A team can only defend for so long, and the resistance was broken with 10 minutes to play. A corner was half-cleared to the edge of the area, and the opposition striker twisted onto his right foot and buried a low drive into the bottom corner: 0-1. Vincent’s frantically pushed forward looking for an equaliser, but the breakthrough never came despite some dangerous balls into the box.

So, 0-1 the final score. Vincent’s will rue this as a point lost, though realistically never looked like taking all three.

Although blessed with more than enough individual talent to compete, teamwork and chemistry are needed to consistently get results at this level of competition. The importance of playing together regularly cannot be underestimated. It impacts so much of what happens on the pitch, from communication, to knowing how a team-mate likes the ball passed to them. Teams that play together consistently achieve a level of fluidity and understanding that others don’t, no matter how much individual skill they possess. The Vincent’s culture has long embraced busy player schedules. Player commitments, both professionally and personally, make a stable starting 11 elusive.

Large squads with a different starting team each week have been the norm since the beginning. Hundreds of healthcare professionals have represented the club over the years, and it is important to acknowledge that this proud legacy comes with some challenges that need to be overcome.

Mark Dwyer maintained his strong run of form with a powerful performance. Not one to shy away from physical contact, Mark got stuck into the midfield battle from the beginning. He won possession on countless occasions and found a nice passing rhythm to put team-mates onto the ball in advanced positions. Outstanding aerially, he can usually be found rising to meet any high ball that comes his way. Unfortunately, the majority of headers came about in a defensive capacity during this particular game. As one of the team’s youngest members, and a key player for the future, we look forward to seeing him develop as an all-round midfielder.

Vincent’s travel to take on Beggsboro AFC on Monday 8 April, knowing wins are needed to stave off the threat of relegation. The first fixture between the sides was an entertaining draw, and both sides will fancy their chances of coming out on top in the return leg.

Training continues every Wednesday evening until late April, and we are always looking for new faces to get involved.