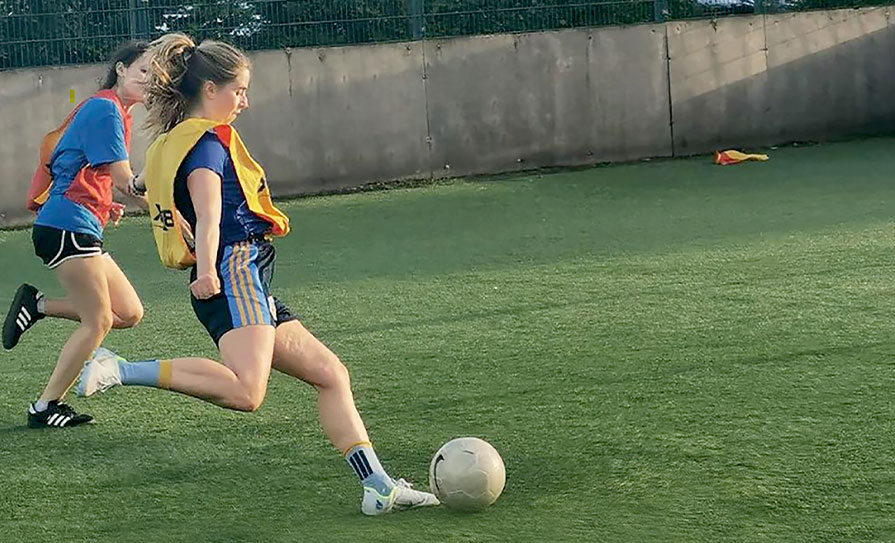 Do you remember that rush? The feeling of pure joy and adrenaline, running after a ball or catching the final shot as the whistle blows? So many of us, as adults, remember that particular feeling as well as the sense of camaraderie that accompanied playing team sports. But as we grew older, opportunities to continue playing team sports dwindled and the excitement of the pitch was traded for the monotony of the treadmill. We long for the days when organised sports were readily available for our age group. All the while, we quietly wonder if the kid inside, who is kept alive by the rush of playing sports, will ever come out to play again?

But why not turn that wonder into action? That’s exactly what a group of female UCD medical students did. They created something out of nothing and filled a gap in the sports arena in Dublin – bringing together not only women athletes – but also those working in healthcare.

A sports club for football (soccer) where women in healthcare (fully qualified and students) can get together once a week in the evening to play five-a-side at the UCD pitches. Friendly, fun, and playful – with no experience needed or age limit!

The goals – no pun intended – were simple. Fill an unmet need for a woman’s football team, in a male dominated sport – and to do so for medical professionals. Of course, having fun was also on the agenda. But although the desire and the intent were there, starting a club from scratch is no small feat.

Creating a club – making something from nothing

The Dublin Hospitals Women’s Sports Club structure relies on many pillars. First and foremost, the creation of the club was a collaboration between the UCD medical students, the men’s team, and UCD MedSoc. One of the women’s team founders contacted the Dublin Hospitals Football Club (DHFC) men’s team last year. After some digging, she was surprised to learn that there was no women’s team, but that DHFC would be delighted to support the creation of a women’s club. “Very well,” she said, and in between exams and holidays, she rustled up some like-minded women from UCD’s medical school. The DHFC men’s team have provided practical advice, encouragement, and know-how to get a long-term club up and running. Next was the logistics.

One of the harder parts of setting up the women’s team, was getting the word out to find players. Many women were interested, (as we later found out), but increasing awareness about the team’s existence was difficult. Nevertheless, the team founder persevered, found players, and eventually – sponsorship!

MedSoc – the medical society for medical students in UCD – was a primary support in setting up the club. They provided groundwork for information on things like renting gear and pitches, and even sponsored the women’s team through the summer while it was finding its feet. The women’s team also ties in with Medsoc’s social media to help promote the club and advertise for future practices.

Getting members is always hard as a new entity. However, a few key members work daily to grow the club into a more solid organisation (see panel).

In this day and age, social media is paramount to communicating and raising awareness about new ventures. Our Instagram page helps promote the team, shares information about upcoming training and events, and most importantly, shows pictures of the immense fun that comes out of playing the game.

These were filled with good times and not too much running. As a cohesive group, we ran around the pitch to warm up, did some devilishly fun footwork drills (designed by yours truly) and worked on shooting and scoring skills. The best part is always saved for last though, when a scrimmage takes place and bibs vs skins take to the field – war markings and all. In all seriousness though, the ladies we have on the team are fierce in resolve and push themselves to work together, make that shot, and most importantly, have fun!

The club is currently recruiting members from across the city to form a team of as many members as possible. We hope that as the word spreads, we can continue social five-a-side games between our team members, and eventually form an 11-a-side competitive team. This would give the team games to look forward to and train for!

We are starting yearly memberships, with rolling memberships available, and some drop-in sessions.

So if you want to join a team of like minded women, who love to play sports, have no or some experience, and want to let your inner kid out to play, come look us up on Instagram for the latest updates!

Hope to see you there!