The august history of the Dublin Hospitals Cup 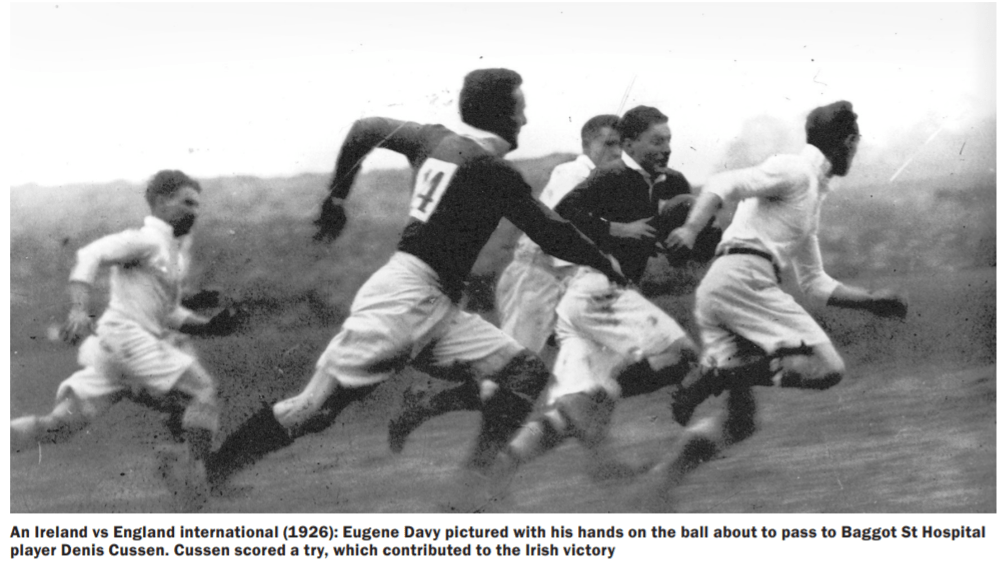 ‘The Hospital Pass’, written by Drs Con Feighery, Michael Farrell, and Morgan Crowe, is an account of the
history of the Dublin Hospitals rugby competition, which dates back to 1881. Here is the foreword to the book

The game of rugby football is attributed to William Webb Ellis who, according to legend, when attending Rugby School in 1823 ran forward with the ball clutched in his hands and thereby introduced a novel modification to an existing ball sport. Over the following decades, the popularity of rugby grew steadily in the United Kingdom and Ireland with Ireland’s first rugby club established in 1854 by students attending Trinity College Dublin.

From the beginning, medical students played a key role in the development of the game and several Dublin hospitals fielded teams, which played against each other or other Dublin clubs. As enthusiasm grew, in 1878 a combined hospitals side was selected under the title of the Dublin United Hospitals Football Club and played against various other sides including a Dublin County team.

This match against the County side became an annual fixture, lasting into the 1930s and acted as a trial for selection to the Leinster team. Over the years, the combined Hospitals Team played on a regular basis against a similarly structured London hospital side and this game continued into the 1990s.

Medical students or recent graduates featured prominently in early representative sides with six playing for Ireland in its first international game, which took place against England in 1875. At this time, rugby in Ireland was governed by two unions, one based in Ulster called the Northern Union and the second representing the rest of Ireland, the Irish Football Union.

Led by a recent Trinity medical graduate, William Cox Neville, at a meeting in 1878, which took place in Trinity, it was agreed by representatives of the two unions to amalgamate, thereby forming the Irish Rugby Football Union.

Some two years later, the establishment of an inter-hospital challenge competition was proposed at a meeting attended by representatives from the majority of the Dublin hospitals. This led to the formation of a Dublin Hospitals Football Union in 1881, which has organised the running of the Dublin Hospitals Cup to this day. The inaugural final took place in Lansdowne Road in March 1882, with the Meath Hospital defeating Sir Patrick Dun’s Hospital, scoring 5-3. Since that final, the Dublin Hospitals Cup competition has been run on an almost continuous basis up to the present time. During World War I, the competition was suspended from 1915 to 1919.

Archived records of the Dublin Hospitals Cup competition have been carefully maintained over the years and include the team sheet of players who played in the final. A remarkable feature is the number of players who featured in the Hospitals Cup competition and were also capped for Ireland. Over 90 players achieved this honour, including some 12 in more recent times.

In particular, in the very early years of international rugby, medical students and newly qualified doctors were strongly represented on Ireland’s international rugby team. Of the first 200 players capped for Ireland, 44 had trained in Dublin hospitals.

Some players achieved legendary status, including E G Forrest who captained Ireland’s first Triple Crown winning team in 1882. Tom Crean toured South Africa with the 1896 Lions, captaining the side on several occasions; later he was awarded the Victoria Cross for bravery, providing critical medical care during the Boer War. Andrew D ‘Coo’ Clinch, another Lions tourist in 1896 was the father of Jammie Clinch, one of the most renowned wing forwards in the game in the 1930s. Paul Murray and Morgan Crowe were celebrated players in the Ireland backline and both were selected for the 1930 Lions tour to New Zealand and Australia.

Karl Mullen, for many years one of Ireland’s most renowned rug by players, led Ireland to their first grandslam win in 1948 and also captained the Lions tour of 1950 to Australia and New Zealand. Of note, he also captained a Jervis Street Hospital side to their first victory in 1948. Bill Mulcahy was a double Lions tourist in 1959 and 1962, and his father also played in the 1912 Hospitals competition.

Barry Bresnihan was a further double Lions tourist, to New Zealand in 1966 and South Africa in 1968 As well as outstanding rugby players, individuals highly talented in other sports played in the Hospitals Cup competition.

Denis Cussen in addition to being an Ireland international winger, was an outstanding sprinter and represented Ireland in the 1928 Olympic Games in Amsterdam. The gold medal winner of the hammer throw in these 1928 games was Pat O’Callaghan, who also played Hospitals Cup rugby. O’Callaghan then repeated his hammer throw success in the following Olympics in Los Angeles.

Another Hospitals Cup player, Kevin O’Flanagan, was an Ireland soccer player of repute. Well known Gaelic Athletic Association (GAA) players also competed in the competition. Some of these players had to use assumed names, because of the GAA ban on playing foreign games.

The Gilvarry brothers, Joe and Tom, both played on the winning All-Ireland Mayo team of 1951 and Donal Keenan won two All-Ireland medals with Roscommon in 1943 and 1944.

The minutes of Dublin Hospitals Football Union committee meetings reveal the marked competitiveness of the individual hospital teams and chronicle the intensity of ambition and sometimes rancour of hospital committee representatives. An important early task was the acquisition of a trophy worthy of the competition and in late 1882 a solid silver hunting cup crafted by Paul Storr, dated 1812, was purchased.

This remains the oldest sporting trophy in Ireland for which there is an annual competition.

For over a century, the Union committee was kept busy with respect to the interpretation of the laws and regulations of the competition and in dealing with many and varied protests from competing teams and disgruntled mentors. The talent of the president in sorting out contentious issues was crucial and the Union was fortunate to have many high profile members of the medical profession taking on this task.

They included Sir Thomas Myles, Frank Purser, Bethel Solomons, H L Barniville, Frederick Gill, Harry Meade, Professor Pearson, Adams McConnell, Arthur Chance, Stanley McCollum and Jamsie Maher. Many on this list were later to be elected presidents of the Royal College of Surgeons in Ireland or president of the Royal College of Physicians of Ireland.

The frequent problems of running the Hospital competition caused one beleaguered committee secretary at the end of his term of office to state that he was not ‘sorry to cast off a mantle, which has at times rested heavily and unshared on my puny shoulders’.

Over the years, the Hospitals Cup tournament has continued to thrive and the intensity of battle has not diminished. However, many changes have taken place and in particular many of the founding hospitals have closed and amalgamated into larger institutions. The RCSI associated hospitals, the Richmond Hospital and Jervis Street, joined forces and are now based in Beaumont Hospital. All of the small Trinity associated hospitals closed and moved their activity to either the St James’s Hospital campus or to Tallaght Hospital.

The Dental Hospital, which had many memorable victories in the late 1950s and the 1970s, eventually could no longer field a team and have now joined forces with its Trinity neighbours, in a team known as the Trinity Federated Hospitals, or Feds. The Veterinary Hospital, which was denied entry to the competition for over half a century, was eventually admitted to the tournament in 2011.

The Mater Hospital and St Vincent’s Hospital continue to compete successfully on their own and benefit hugely from the strength of rugby in their associated university, University College Dublin.

In earlier years, the Hospitals Cup Final was played in the home of Irish Rugby, Lansdowne Road, then later in Donnybrook and now in the Old Belvedere ground in Anglesea Road. Until recently, the competition got extensive coverage in the national news papers and the final was regarded as one of the major rugby events in the first half of the rugby season. Accordingly, several international referees took charge of the game, including well known officials such as Kevin Kelleher and John West.

As rugby in Ireland became more rigorously organised, with the start of the All-Ireland League and the evolution of professional rugby, the visibility of the competition diminished. This had the effect that international rugby players and indeed those playing for club first team sides were no longer available to play in the competition. Nonetheless, some retired international players, including Paddy Johns and Emmet Byrne, did tog out for their hospital sides in recent times.

The secondary schools attended by players in the Cup competition are very diverse and located in all corners of the country. As the competition is based in Dublin, it is no surprise that a majority of the players come from the large rugby playing schools in the city. However, during the last several decades, players from some 160 different institutions featured including a large number attending schools where rugby is not the premier sport.

It is also notable that many players now come from Northern Ireland, England, Canada, the US, and Australia. So the appeal of rugby as a sport and the opportunity to play it in this highly competitive tournament has grown over
the years. The interaction between players from such diverse backgrounds is an invaluable experience.

With the emerging professionalism in the past 20 years, many changes have taken place in the playing of rugby in Ireland and further afield. Schools rugby has grown in strength and the skill with which the game is played is greatly admired. Enthusiasm for the game has spread into more rural areas and this has enhanced the player pool numbers with a benefit to Ireland’s international teams.

Despite these advances, amateur rugby, especially in the cities, has become less popular and, not infrequently, high-level schools players stop playing the game a few years after leaving school. In this setting, the Dublin Hospitals Cup competition has grown in strength as it gives players an opportunity to play their favoured sport in a highly competitive manner over a focused three-month period, such that it does not interfere with their scholarly pursuits.

Thus, the competition continues as a highlight of the amateur rugby season, although not receiving the large media interest and exposure of yesteryear. As we enter into the 2020s, the Dublin Hospitals Cup is now more organised and more competitive than at any time in its 140 year history. The competition between rival hospitals has retained its essential vibrancy to this day and games are fought with an intensity and skill that is a testament to rugby as a sport.

In this book, we celebrate the story of the Dublin Hospitals Cup competition, one of the oldest world rugby competitions, now taking place for almost 140 years. We recall the important contribution the medical profession has made to rugby in Ireland over the years. The competition remains a dynamic sporting and social event in Dublin’s hospital life to this day. The authors – Morgan Crowe, Michael Farrell, and Con Feighery – all played in the Hospitals Cup competition and later contributed to its organisation as members of the Union committee. Dublin Hospitals rugby with its long history of characters, anecdotes and controversies, as described in The Hospital Pass, offers a window on the evolution of Irish rugby and the changing face of Dublin medicine.

Copies of The Hospital Pass: 140 Years of Dublin Hospitals Rugby can be purchased via the RCPI online shop.