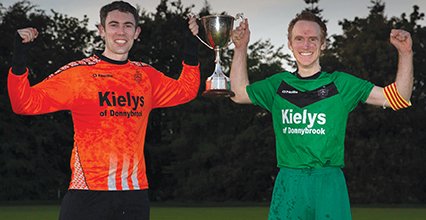 It’s been a welcome off-season for St Vincent’s Hospital FC following the drama of last season’s successful relegation battle. The team struggled throughout the year for consistency, but ultimately displayed quality and character to achieve safety and guarantee Leinster Senior League Major 1B football for another season. James Clarke’s stunning 25-yard half volley against CIE Ranch and Rory Durand’s winner in the 1-0 relegation dog-fight victory away to Dunboyne seem like light years ago when the squad got together for preseason in Bushy Park.

Despite the break, it wasn’t all relaxation for some of the St Vincent’s squad. The Hospital’s Cup, which took place in July, saw St Vincent’s reach the final, losing against Cork University Hospital on penalties.

Vincent’s, who were well represented internationally in the Irish medical football team, were beaten by Argentina in the quarter finals during the Medical World Cup in Mexico in July. Vincent’s representatives Fionn Nally, Fionn Lynch, Darren McMahon, Gavin Kane, and Rory Durand joined former players in the travelling party to Cancún.

Unfortunately, the World Cup is the last we will see of Lynch, Nally and McMahon for some time, all three will continue their medical and football careers in Australia next season. Kane who was outstanding for Ireland, sustained an injury and will link back with Vincent’s in a few weeks

The week-long event coincided with the July NCHD changeover back home. The changeover represents a challenge to Vincent’s, with players pursuing careers abroad or relocating to hospitals outside the reaches of the LSL. There were several particularly significant departures this summer.

The loss of McMahon, a revelation at left back since he burst onto the scene a few years ago, will leave a huge gap and may require an entire restructuring of their back four to cope with his absence.

His combination with Nally on Vincent’s left side has caused devastation at times over the years and it is certainly the end of an era. Nevertheless, hopes remain that the duo will combine again in the not too distant future. Lynch, also Australia bound, had an exciting debut season and the current management will hope to see him back to lead the line in the future. James Clarke, scorer of one of the crucial goals in the club’s history at CIE, has left for pastures new, his professionalism and big-game consistency will be sorely missed.

The past two years have been hugely successful. We have seen the club’s first LSL title and promotion to the highest level it has ever played. Sean Keane, anaesthetics SpR, masterminded that golden era.

Every aspect of the club has evolved thanks to Keane, through instilling a high level of professionalism and working to recruit high quality footballers, results followed. Keane’s legacy sees Vincent’s training and playing at a high level with excellent facilities, whilst adhering to values that truly identify with the football club. His influence will certainly be missed as he continues his anaesthetics career in Melbourne. Rest assured, the Vincent’s way will live on through the new managers, Rory Durand and John Cosgrove, both promoted from within, having played under Keane for three years.

Cosgrove and Durand were presented as joint managers at the club’s annual general meeting in June. The Derry duo pick up the reins where Keane left off with renewed energy, fresh ideas and the club in a healthy position. They have a wealth of experience representing the club as players. Cosgrove comes from a footballing family, along with brothers Gareth, Colm, and David, he has represented St Vincent’s marvellously over the years. The club’s current player of the year, his experience in LSL and AUL will be invaluable. Durand has been involved with St Vincent’s since he was a UCD Medical student. The ex-Derry City and UCD man has a good knowledge of the LSL at various levels and will look to maintain the club values instilled by the legendary Dr John Seery, who first introduced him to the club as a young player.

The season ahead represents a new test for both in their first stint as player-managers. They have similar views on the game and it is imperative they gel to continue the club’s recent progress. Management of Vincent’s offers a unique challenge in balancing matchday squads with call rotas. In fact only once in the 18-year history of the club has the same starting 11 been named two games in a row. It will be something Durand and Cosgrove will have to get to grips with early on.

Positive preseason results against Celbridge, Beechwood, Dundrum, and Dunboyne have led to optimism that the pair will carry into the competitive season.

The football club has its own annual changeover in the form of a recruitment drive over the summer. Due to players moving away, summer recruitment is essential to keep the club competitive, this has been most evidenced by the success of the Keane years.

Traditionally, the Hospitals Cup, UCD Med Cup, and Medical World Cup have been prime scouting grounds for Vincent’s. This summer heralded the arrival of a number of exciting prospects. The Hospitals Cup is the first opportunity to check out the talent. A number of players on show at the one-day event were followed at the World Cup and have now signed with the club. Notably Brian Gaffney, David Gildea and Colm Kirby have all registered for the new season having played at the Hospital’s Cup.

Gaffney is a Vincent’s medical SHO and comes highly regarded as a creative centre midfield player with genuine quality. He was the stand out performer at this year’s Hospital Cup and can have a massive impact this season.

After impressing at the Medical World Cup, Gildea will look to compete for attacking positions, an area where Vincent’s could struggle after the losses of Nally and Lynch. Gildea, an ophthalmology trainee, combines a cultured first touch with pace and deceptive strength on the ball.

Colm Kirby, outstanding in Mexico, has been an integral to the squad throughout preseason. His arrival will soften the blow of losing McMahon in the summer. The Corkman’s consistency and attitude in preseason has been tremendous and he has will be an important presence in the dressing room this year.

Durand and Cosgrove also await the fitness of GP trainee and attacker Cillian Keogh. A key performer at the Medical World Cup, he is likely to join the ranks once he overcomes a shoulder injury.

The real problem area for the club is between the goalposts. The loss of three goalkeepers has proven to be a thorn in the side for the doctors, who are currently exploring all avenues to bring in a quality custodian with the new season fast approaching.

Vincent’s will be linking in with UCD Medicine on the look-out for fresh faces when the academic year starts back and will be engaging with medical students to integrate with the club through organised events. Although St Vincent’s is a UCD medical school affiliated hospital, the club is certainly inclusive to students from any medical school. Last season, graduates from Trinity, UCD, Cork, Galway, RCSI and Limerick all wore the Vincent’s jersey with distinction.

The club committee have been working hard behind the scenes to upgrade the matchday venue and have secured Pearse Park, Crumlin to host home games. St Benildus has been a fortress for the doctors over the years and was a huge upgrade from Bushy Park. Vincent’s home form was outstanding in 2017/2018 and formed the platform for their league winning campaign. Moving to Pearse Park offers a top quality surface and excellent facilities and represents the club’s ambition.

Durand and Cosgrove have made steady progress with the squad and have their eyes firmly on promotion. Having identified a number of areas for improvement from last season’s campaign and with a year’s experience in Major 1B behind them, St Vincent’s are in a strong position.

The summer saw a massive overhaul of the amateur football scene in Dublin. One of the major league organisations the AUL, lost a number of their top teams, who made the transition to the LSL to upset the applecart. Three AUL teams have transferred to the Saturday Major 1B, to make the division even more competitive.

The level of quality within the squad has certainly risen with the summer’s transfer window. The real question is, can they form a cohesive unit? And as always, how consistent will the matchday squad be?

Word from the camp has been extremely positive. There is a confidence within the group that with the shrewd additions to an already experienced squad, promotion is the minimum target.