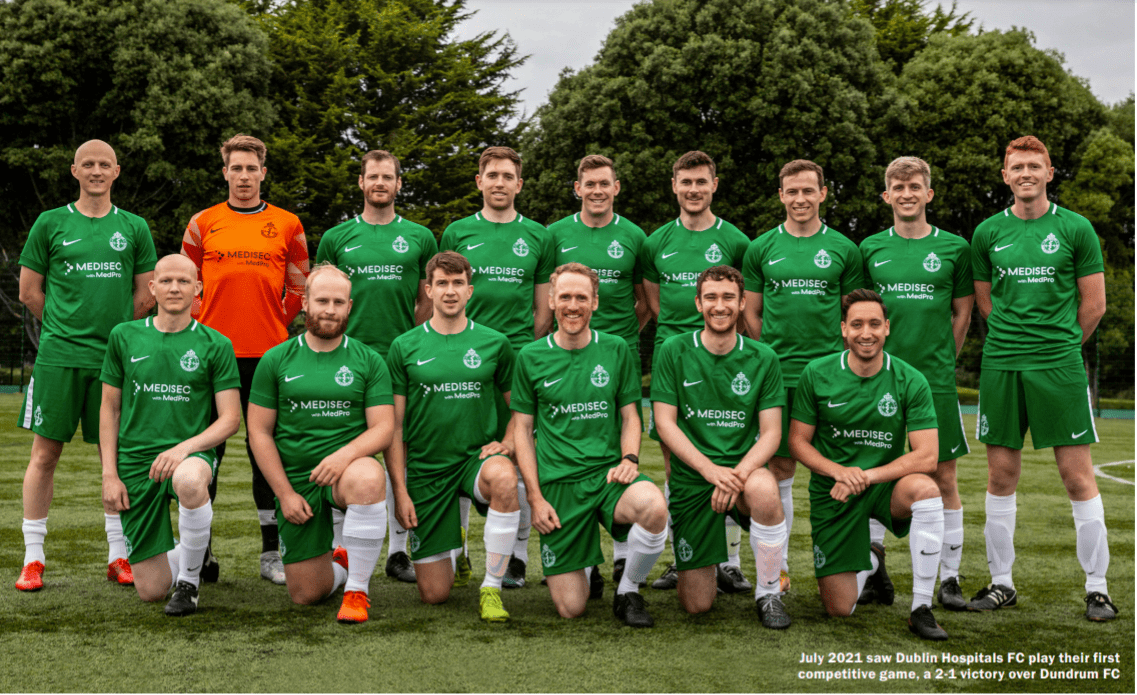 With the Leinster Senior League season now at the midway point, Dublin Hospitals FC (DHFC) find themselves in a strong league position this New Year, which gives us an opportunity to take stock of the progress so far. We rewind back to Friday, 9 July 2021 on a balmy Sunday evening in Crumlin, when DHFC finally kicked off its first ever competitive game in a 2-1 victory over Dundrum FC. This was in the wake of perhaps the longest pre-season schedule in history, enforced by mandatory restrictions on competitive amateur sports. During that time of social distancing and restrictions, the club management committee had been working tirelessly to create a competitive football club to represent those working in Dublin’s hospitals.

It comes as no surprise that the first season has been a learning experience for player-managers Rory Durand and John Cosgrove. Although this is the second season in charge for the Derry duo, the first year was hugely disrupted by restrictions on sporting activities, meaning the now defunct St Vincent’s Hospital FC was unable to complete the 2020/2021 season in its entirety. Since July, their capabilities have been put to the test in the Leinster Senior League Saturday Major 1B division, where most teams come from wellestablished amateur clubs with decades of experience.

At the beginning of the season, DHFC, a brand-new club, were clearly an unknown entity to their league rivals. However, based on pre-season results and positive signs on the training ground, those in the know saw the Hospitals as having an outside chance for promotion at the end of the season and that has become the top priority.

DHFC bolted from the blocks in the first few league fixtures, immediately turning Pearse Park into a fortress with two wins and a draw as the season got underway. Ian Daly opened the Hospitals account with a momentous goal, the first in club history. A typically well-timed Lampardesque run and neat finish has been a feature of Daly’s season so far. Seven points from the first three games saw the DHFC briefly become early league leaders in August. This was followed by two cup runs, with the doctors reaching the third rounds of both the FAI Junior Cup and the Leinster Football Association Cup.

With 10 wins from the first 12 fixtures, Pearse Park quickly gained a reputation for being a difficult place for visiting teams. The nature of a football team full of shift workers is that player availability is one of the key determinants for success in any fixture. The doctors peaked in the second round of the LFA Cup, on a crisp night in early October. With almost no injuries and a strong squad available, the Hospitals comprehensively outclassed Clontarf FC, one of the oldest amateur clubs in Dublin.

A 6-2 scoreline was a just result, such was the home team’s dominance from start to finish. With the ups, came the downs, in something of a rollercoaster five months. In late October, Dublin Hospitals fell victim to an horrendous hamstring epidemic, of which only central defenders seemed to be susceptible. An injury to first choice goalkeeper Paul Schutze and being without a recognised centre-half for most of October and November meant results took a negative turn. Within three weeks the Hospitals fell out of the promotion places in the league and were knocked
out of the FAI and LFA cups at the third round of both.

A half season in numbers

Since that memorable floodlit Friday at Pearse Park when DHFC finally became a reality, there have been 36 goals and
35 players have pulled on the green jersey. After 16 games, Dublin Hospitals are well placed to make a real attempt
at promotion this season. Dealing with injuries is par for the course in a long season, but the Hospitals luck has been
rotten in that regard and in order to achieve promotion, a change in fortune would make things a lot more straightforward for Cosgrove and Durand. The players have become accustomed to tactical change-ups to compensate for player availability and that is at least one positive to be taken from the recent difficult run.

The winter break has provided breathing room and an opportunity to work on the training ground before the return
to play in January. The transfer window officially opened and the recruitment drive was in full flow over this period.
Reinforcements are essential to bolster DHFC’s injury stricken defence. Medical students from across the city are the primary source for recruitment and management worked hard to unearth some fresh talent.

As we approach the midway point in the season, at the time of writing, Dublin Hospitals are in sixth place in the league. Currently Skerries Town are way ahead of the rest with 10 points separating them from second placed Killester/ Donnycarney FC and Finglas United. To reach the top three, the Hospitals need to be firing on all cylinders in January. A defeat in the next fixture would make a difficult task near impossible. This season has seen significant progress on the field, having narrowly survived relegation for the last two seasons as St Vincent’s. Promotion is now a possibility, with the next games likely to be decisive.

Despite being knocked out of the LFA and FAI Cups, the Hospitals still have two LSL cup competitions upcoming in the New Year: The prestigious Noel Ryan Cup and the Tom Carroll Cup. With Skerries Town running away with the league, the best opportunity for silverware will be in one of these competitions. There is no doubt that Durand and Cosgrove will be eager to end the club’s inaugural season with a new addition to the trophy cabinet.

Plenty of football has been played and there are many more games upcoming. With thanks to sponsors, Medisec Ireland, Dublin Hospitals FC will continue to progress from these early stages of a long-term project. Plans for
expansion are afoot to accommodate the ever-increasing number of people in the medical community with a passion for sport and particularly football. There will be more to come in 2022 and you will hear about it here first, in the
Medical Independent.