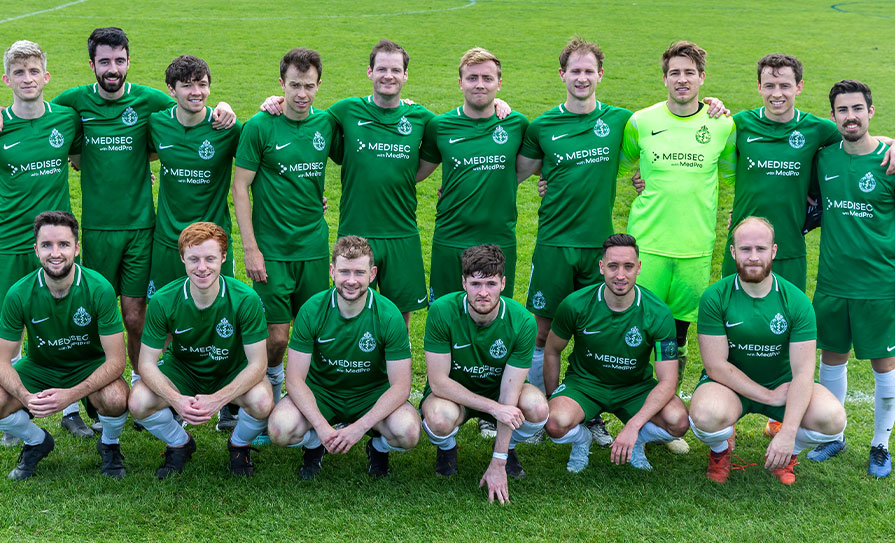 With the inaugural season of Dublin Hospitals FC (DHFC) out of the way, the medics find themselves in familiar territory in the Leinster Senior League (LSL). The players have had four long months to lick their wounds following the defeat at the semi-final stage in the Lanigan Cup, but with the new season looming, and a clean slate to work on, the optimism is palpable.

Pre-season began in earnest in July with the senior team following a structured training programme focused on fitness and cohesion. Plenty of experimentation has taken place over the summer months, which hasn’t always been conducive with results, but these games are about preparation and learning.

The pre-season break allowed for a significant recruitment drive for DHFC. The signatures of students Conor Vaughan and Eoghan Daly were secured for the 2022-2023 season. Vaughan is an explosive attacker, comfortable on either wing or centrally, who is expected to be a tremendous goal threat for the medics this season. On the other hand, Daly is a composed full-back who can easily fill in at centre midfield when called upon.

The loss of first team defenders, including last season’s club captain Colm Kirby, has made natural defenders more valuable than ever, and there will be high expectations of Daly for the season ahead. The returning James Clarke will provide a calming presence in the heart of the DHFC’s defence and add to the ever expanding presence of NUI Galway alumni in the squad. Another former Ireland youth international has been added to the club ranks in Kevin Caldwell, who has already shown himself to be a dominant presence in central midfield in pre-season.

Alongside new faces, the Hospitals have been making advancements in other areas. The Dublin Hospitals Women’s Football team has been gathering pace over the summer months. With medical students returning to campus across the city and a fresh influx of NCHDs, the women’s team is now in full swing, providing a social setting for women of all levels of experience in football to play.

Meanwhile, back to the Leinster Senior League team, plans are in place to secure regular match highlights available for live streaming along with on demand match highlights, which will soon be available on the revamped Dublin Hospitals website (www.dublinhospitalsfc.com). This has been made possible by a new partnership with sponsors medicalaccountant.ie. Regular match highlights will help to provide an insight into the club’s progress alongside the excellent photography provided by club photographer Rodney Smythe.

The past three years have seen DHFC establish themselves as a strong outfit in the LSL. Having narrowly missed out on promotion last season, the Hospitals’ will be vying for a top three finish this time around. An inf lux of new teams leads to uncertainty as to who will be competing for the title in May. There will be an abundance of football to be played this year with DHFC competing on four different fronts including the league, FAI cup, Leinster FA cup, and the Lanigan cup. With the club trophy cabinet building up cobwebs in recent seasons, the Hospitals will hope to finish the season with a prize.

Outside of the LSL, the management team at Dublin Hospitals alongside the Hospitals Cup committee are planning to restart the Hospitals Cup competition in 2022. The competition has been on a three-year hiatus due to the Covid-19 pandemic. Hospitals Cup legend Denis Curtin guided Cork University Hospital (CUH) to the title in 2019 making CUH the champions for three years in a row. This year we expect to see St Vincent’s, the Mater, the Federated Hospitals (St James’s and Tallaght Hospitals), RCSI Hospitals, Waterford, and Cork compete in the 2022 competition.

2023 will also see a return to international football for Irish medics. The Medical World Cup will take place in the summer of 2023 in Vienna, Austria. The last time that Ireland took part in the event the year was 2019 and the venue was Mexico. Trials for the squad will take place in the coming months. This marks a return of the World Cup to Europe, having previously taken place in Leogang in 2017 and Prague in 2018.

Regarding DHFC, the new season has been met with excitement and anticipation. Only time will tell how the Hospitals fare in the LSL. Rest assured there will be plenty of football ahead and you’ll be able to read all the Dublin Hospitals news in the Medical Independent over the coming months.

PS: Dublin Hospitals FC would like to thank our wonderful sponsors Medisec Ireland and medicalaccountant.ie. Go online to www.dublinhospitalsfc. com for all the latest DHFC news, records, results and other features.