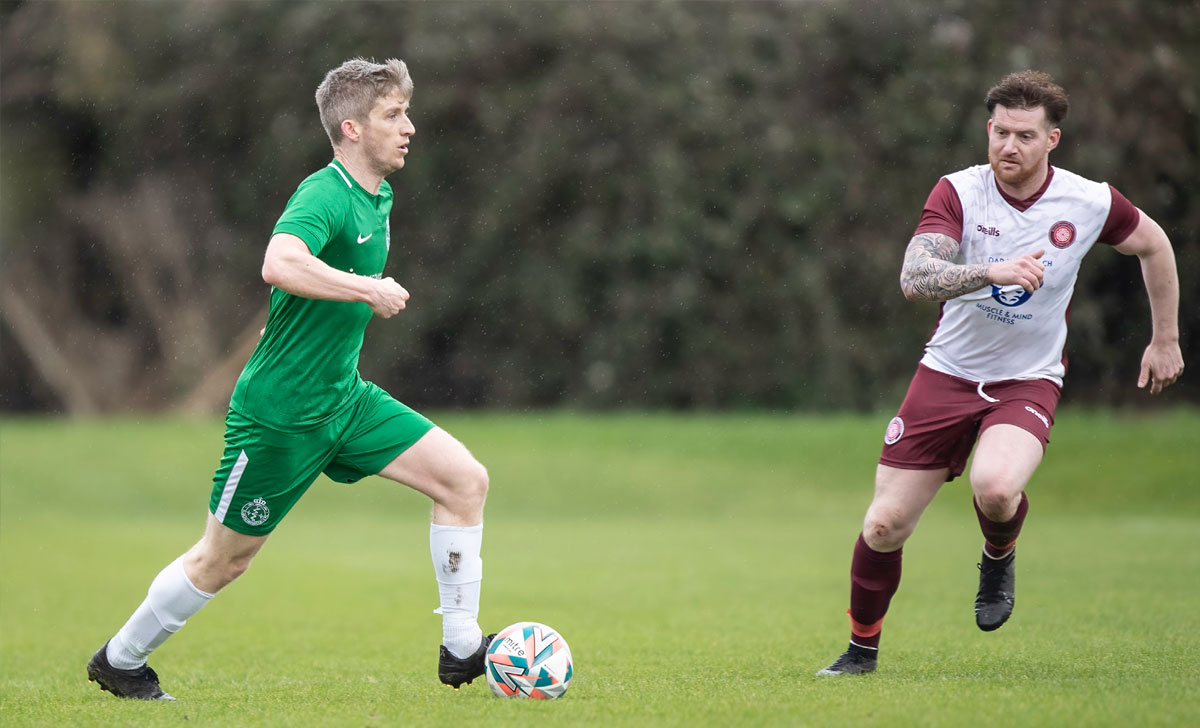 On a blustery Saturday afternoon, Dublin Hospitals FC’s (DHFC) Leinster Senior League (LSL) campaign got back on track, after a three month hiatus due to Covid postponements and the winter break.

Killester can thank their ground-people for maintaining one of the best grass surfaces in the league. Unfortunately for the Northsiders, it was a perfect fit for the counter-attacking doctors on the day.

Both sides started well, with an even share of possession in the opening 30 minutes. Killester’s central midfield, drafted in from the higher echelons of intermediate football for the day, kept possession well and found some neat forward passes; however, their play in the final third let them down. As the half wore on, the Galway combination of Gaffney and Cheevers began to influence proceedings. Time and again Cheevers got behind Killester’s back three with overloads created on the left side in combination with Durand and the unpredictable Brian Gaffney. The searing pace of Wrynn on the opposite flank stretched and exposed the Killester back three on this vast pitch on the counter-attack.

It was the team from Killester who opened the scoring. Chambers, playing in centre midfield for the home team, had been causing all kinds of trouble for the doctors, with probing forward passes early in the game. He picked up the ball after a loose pass from a DHFC defender 30 yards out and wasted no time in dispatching a powerful effort towards the top right corner. Berkeley, standing in for Schutze for the day, had no chance. Within five minutes of the restart, DHFC had a glorious opportunity to level matters. A perfectly weighted through ball from the industrious Ian Daly saw Rory Durand clean through on goal. Durand neatly rounded the oncoming keeper, but hit the side netting from a tight angle. Despite an evenly matched and enjoyable first-half for the spectators, DHFC trudged off at half-time a goal down and with the prospect of a mountain to climb in the second-half. It was an all too familiar feeling for this group of players.

As the action restarted, the doctors seemed to have taken a level-headed view on things, despite the scoreline and picked up where they left off at the end of the first-half. On the 55-minute mark, DHFC finally got the goal that their play deserved. The move started with a clearance from Colm Cosgrove, who had been a colossus at the heart of the DHFC defence all day. Wrynn, as he had done on numerous occasions in the first-half, picked up the ball just outside his own box and drove forward at pace, before releasing Durand down the outside channel. After reaching the byline he cut the ball back to the penalty spot. Then a neat dummy from Cheevers left Gaffney with a simple finish. It was a scintillating break involving every member of the DHFC attacking quartet.

Within five minutes DHFC took the lead. John Cosgrove split the Killester defence in half with a perfectly weighted through pass. In a mirror image of his first-half opportunity, Durand broke clear of the Killester Donnycarney defence. This time no chances were taken and Durand squared the ball to Cheevers who had an open goal to pass the ball into.

Unfortunately, for DHFC, the lead was short-lived. A dangerous inswinging corner led to a wrestling match between Kirby and Keating, resulting in a penalty being awarded against the centre-half. Keating dusted himself off and duly dispatched the spot kick with minimal fuss, levelling the scoreline.

As the second-half wore on, the doctors began to take control of the game. Only a man of the match performance from White in goal for Killester kept the scores level until the 80th minute. It was the left foot of John Cosgrove that proved to be decisive again. After some good build-up play, a blocked shot from Kirby, fell to the feet of Cosgrove, 30 yards from goal. It was an opportunity too tempting to turn down and the midfield playmaker slammed a spectacular effort into the top left corner. A carbon copy of many of Cosgrove’s goals in the past, this was fit to win any football match and appropriately marked his 50th club goal.

With a slender lead intact, DHFC continued to be proactive and search for the goal to put the result beyond reasonable doubt. Brian Gaffney, who had tormented the opposing defence all afternoon, was able to effortlessly dribble his way into Killester’s 18-yard box. As he looked sure to double his tally for the day, he was brought down inside the box in desperation. The outcome was never in doubt as Cosgrove made it four for DHFC.

A 4-2 win sees DHFC in mid-table with nine games left to play in the LSL season. An outside chance for promotion is still on. Next up for DHFC will be a crucial home fixture against the familiar faces of Dunboyne AFC. There really is nothing quite like the doctors in green under Friday night lights at Pearse Park.

PS: Dublin Hospitals FC would like to thank our kind sponsors Medisec Ireland for continuing to support the club for the past year. You can keep up to date with all things DHFC at www.dublinhospitalsfc.com