Born to run or cycle or walk 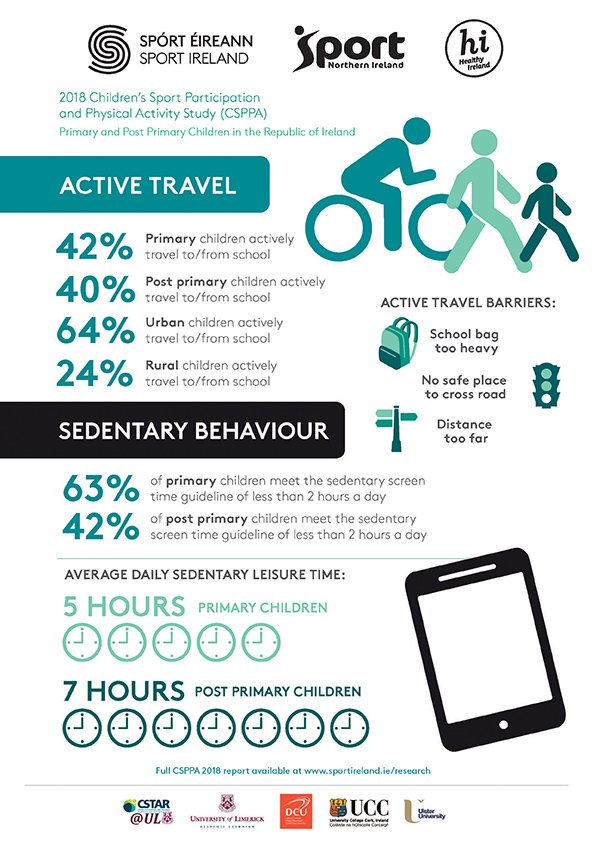 Sport Ireland, Sport Northern Ireland and Healthy Ireland (through the Healthy Ireland fund) has published the first all-island children’s sport participation and physical activity (CSPPA 2018) study. It provides insights into the experiences of children and adolescents throughout the island around their participation in physical activity, sport and physical education. In the case of children from the Republic of Ireland it also includes comparisons with the results of the CSPPA 2010 study commissioned by Sport Ireland.

The report contains a mixture of positive findings as well as highlighting some significant challenges in the areas of physical activity, sport and physical education. These include:

Only a small minority of children, North and South, are active enough to meet the physical activity guidelines of 60 minutes or more of moderate to vigorous activity per day. The numbers meeting the guidelines decline as children get older.

Levels of active and social participation in sport, in the school and in the community, are high although there are notable differences for particular groups based on age, gender, disability, and social class. Children who play sport regularly are significantly more likely to meet the physical activity guidelines.

In the Republic of Ireland, notable improvements were seen in active commuting (walking or cycling) to school since the previous study in 2010 although barriers exist here around the distance to travel to schools and the question of safety.

Mr Kieran Mulvey, Chairperson of Sport Ireland’s Board said: “CSPPA 2018 highlights the significant levels of sports participation among children and young people on the island and the contribution that such participation makes to their health, wellbeing and development. Sport Ireland is committed to working in partnership with key stakeholders under the National Sports Policy to ensure that the benefits from being active are available to all our children and young people.”

Ms Antoinette McKeown, Chief Executive for Sport Northern Ireland said: “Sport NI welcomes the launch of the children’s sport participation and physical activity study (CSPPA 2018) as follow up to the original CSPPA study (2010). I would like to express my thanks to the researchers involved on both sides of the border who have produced an invaluable look into children’s activity levels on the island of Ireland.

Notably, this is the first time that Northern Irish statistics have been included in the collection of data in the CSPPA reports- this provides an excellent base for future policy development and delivery.”

The study is expected to provide valuable baseline material against which future progress under policy developments under the National Sports Policy and National Physical Activity Plan can be assessed.

The study involved some 6,600 students from 115 schools across the Republic of Ireland and Northern Ireland along with school principals and teachers from many of these schools.  The CSPPA 2018 research team comprised of researchers and students from University of Limerick, Dublin City University, University College Cork and Ulster University.