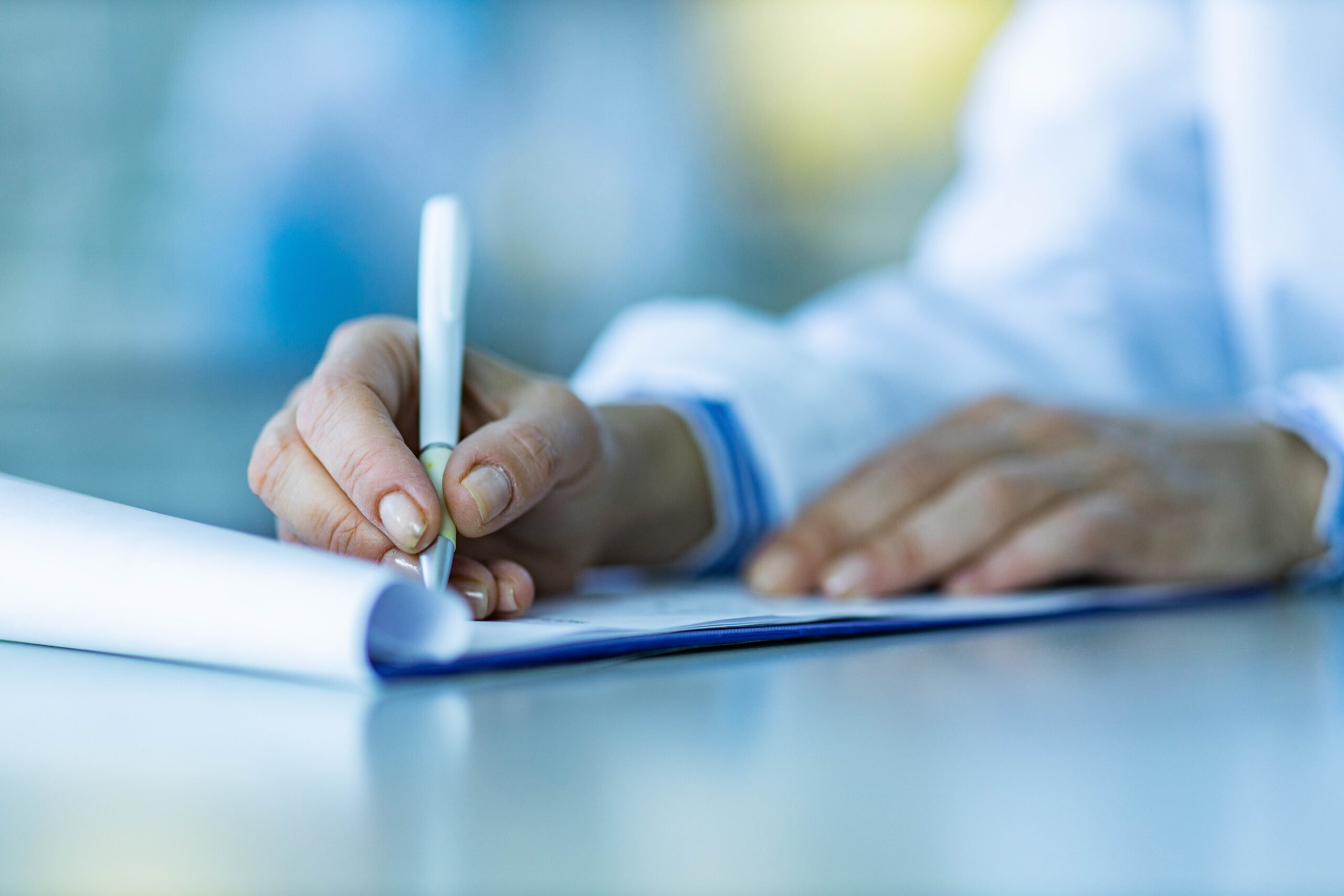 Close up of unrecognizable female expert writing down her notes at doctor's office. Copy space.

The Covid-19 pandemic has impacted many aspects of doctors’ lives, but one part that has remained constant for Dr Austin Duffy is his daily writing routine.

“You have to clear the space,” Dr Duffy, Consultant Medical Oncologist in the Mater Misericordiae University Hospital, Dublin, told the Medical Independent.

“At the moment my space for writing is built into my day-to-day routine. It’s a relatively short period of time. It’s literally 30 or 40 minutes in the morning and on the DART, or maybe a spare 10 or 15 minutes if I’m early for a meeting. I might get the earlier DART and just sit in Connolly station for 10 minutes. “It is always stolen or snatched time. It [the pandemic] has not made any difference really.”

The Dundalk native published his second novel earlier this year. Ten Days (Granta Books) has received excellent reviews. It comes a few years after his debut novel This Living and Immortal Thing (Granta Books) was shortlisted for the Kerry Group Irish Novel of the Year, as well as being runner-up for the McKitterick Prize and highly commended for the British Medical Association Medical Books Awards.

With another novel due to be published next year, his daily routine of “stolen or snatched time” seems to be working.
“I think I can do that, because I have been writing seriously, and by seriously I mean on a daily basis, for nearly 15 years now since I moved to New York in 2006,” he said.

“That was a period of time before I had children, where I could spend many hours at weekends doing it. I had a research job that afforded me some time in the morning.”

Dr Duffy described the earliest period of his writing as a time “when you are figuring out how to write, and you are working on a draft of a novel that’s going nowhere, that period of time can go on for a couple of years”.

“I think you have to go through that… just to learn the craft. When I was working on my first book, the first three or four years was basically going down rabbit holes and I don’t think there was any way to shortcut that. All of that was necessary to figure out what worked and what wouldn’t.

“I think at this stage I’m more focused and can condense things down to 30 or 40 minutes.” The most recent result Ten Days is different from his debut novel as it less clearly reflects his day job. Cancer research played a significant role in This Living and Immortal Thing.

“There is a medical condition that gets revealed [in Ten Days], that was something that evolved as the book went on, almost as a device as part of the storytelling element,” Dr Duffy said.

“The book is mainly inspired by living in America and issues relating to identity, which in my mind are the dominant themes in the book. There is a cross-cultural aspect, the central character is recently bereaved, his wife was Jewish, the whole premise of the book is he is travelling to New York with his teenage daughter with her ashes to disperse them in the Hudson and basically he is reunited with her family and there is a sort of clash of cultures, if you want to put it like that.

“That was partly inspired by my own story, my wife is Jewish. But it’s not biographical in any way, I get on very well with my in-laws and my wife is still alive.” He added that he would not think of it as a “medical book”.

How does Dr Duffy feel about straddling two different ‘areas’ – the medical and the literary?
“I don’t know much about the writer’s area, I don’t have any interaction with it,” he said. “Not through any choice, I just don’t have that opportunity.”
One rare exception was when This Living and Immortal Thing was shortlisted for the Kerry Prize and he attended the Listowel Writers’ Week.

“It’s not as if I’m well known as a writer and alternatively maybe I’m not thought of as one, because I have this full-time career, I don’t know.”
In terms of other doctors who write, he said: “I’ve read a couple of books, but it’s not as if we all hang out together either.”

Medicine and writing seem to be two professions that have a big influence on people’s identity. Does he ever feel a tension in this? “It’s a good question. I would regard that as something that can be very fluid,” Dr Duffy said. “When I’m up first thing in the morning and writing before the kids are up, then I’m a writer.

“But once I go into the Mater, my identity changes: I’m a physician or whatever. Then when I’m with the kids I’m a father. It definitely changes and I wouldn’t like my identity to be totally dominated by being a doctor, say, I would not want it to be as all-encompassing as that.”

On the literary impact of the Covid-19 crisis, he does not believe there “are any rules” in how authors approach it in future writing.

“If someone wants to write about the pandemic there is nothing wrong with that,” Dr Duffy said. “But I think the idea of just sitting down with that idea in advance that you have to, or should, there is no should. It’s really what motivates you, what’s compelling you to write – that could be anything.”

His own compulsion for daily writing was not always there.

“I wrote when I was younger, I had a great teacher who was very inspiring [but]that [later] went all to the side.” When Dr Duffy moved to New York in 2006, he was “living in very basic hospital accommodation on Manhattan and I had no internet and television, so I joined a writing class in Greenwich Village”.

“I sort of went from there and started doing it every day and that was in my early 30s when that happened.” This routine remains the fundamental basis of his writing experience.

“For me it’s not about the high point of publication or whatever. It’s just the day-to-day exercise of it that really attracts me. It’s a bit of a cliché, but it’s kind of true, the process of it every day is like [physical] exercise for me. I find if I don’t do it, I feel there is something lacking.”

With Ten Days now out a few months, has he read the reviews and how does he find the post-publication period?

“I think the trick is to have no expectations – I really don’t. That way you are pleased if something happens and you don’t get disappointed if something doesn’t happen. I think that is a good exercise,” he said.

“Once the book is out there you have no control over it, and nor should you. I read the reviews, absolutely, the reviews for Ten Days have all been pretty good actually and I’m happy with them. I don’t really have anything to complain about to be honest.”

Ten Days by Dr Austin Duffy (published by Granta Books) is out now.