Stepping inside The Ministry of Bodies 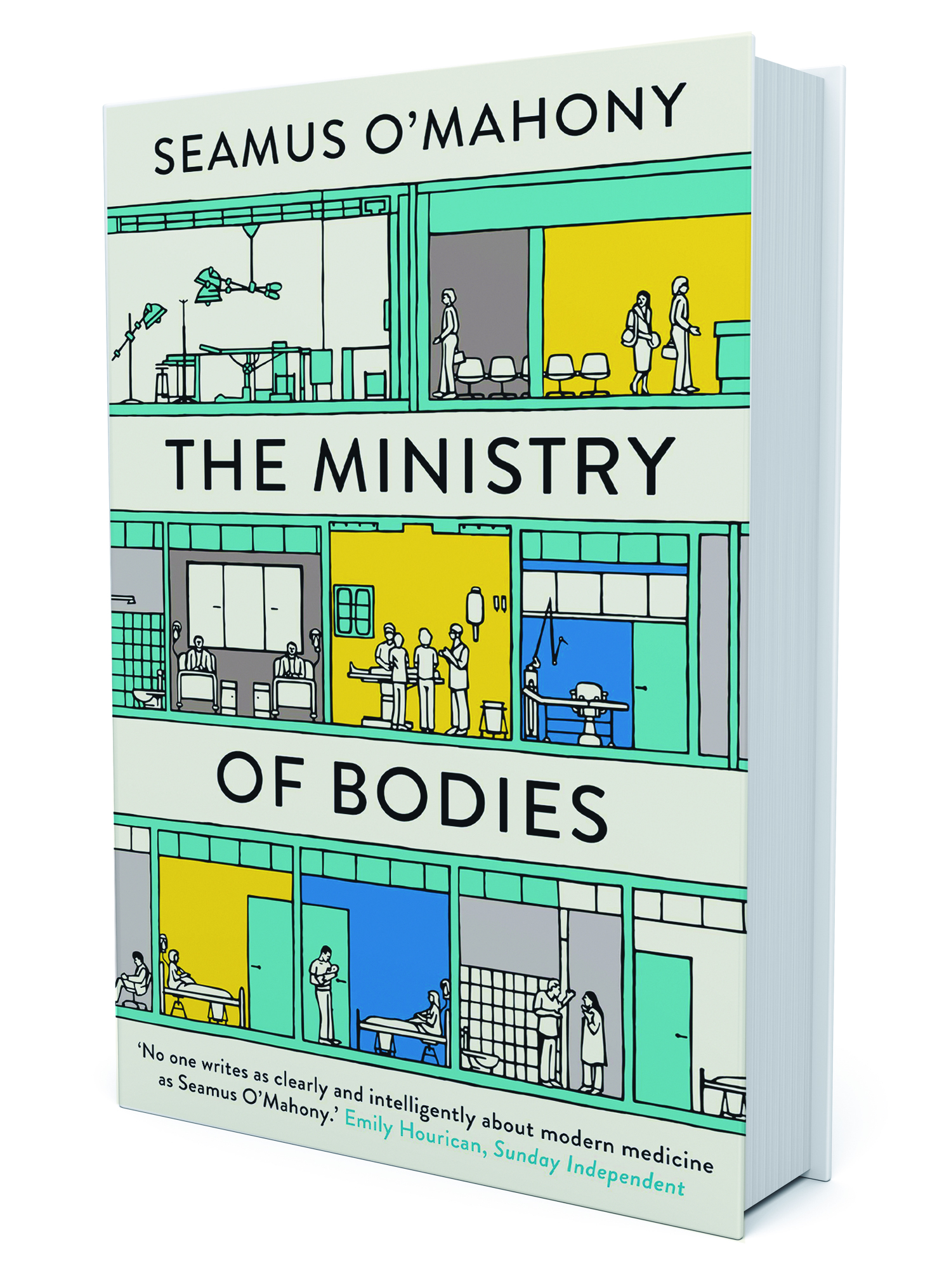 David Lynch speaks to Prof Seamus O’Mahony about his latest book, The Ministry of Bodies, the doctor-patient paradigm, and the contemplative life

Shortly after his recent retirement as Consultant Gastroenterologist at Cork University Hospital, Prof Seamus O’Mahony published his third book, The Ministry of Bodies. It has received positive reviews, including in the Irish Independent, the BMJ and the Medical Independent (MI). The book is a series of reflective vignettes about what turned out to be his final months working as a doctor, intermingled with entertaining and interesting observations about medicine, society, and his own career.

Speaking to MI in March, Prof O’Mahony, who is also one of our columnists, said he was looking forward to working as a community vaccinator, but he had no idea about his next book project.

“I have a feeling I have said all I want to say about medicine,” he said. “I wouldn’t mind taking a break, and to get out of the house. I’ve been in lockdown now for a year.”

“The ministry was an oasis of kindness and comfort. It was also a place of chaos and conflict, of institutional cruelty.” Page 8, The Ministry of Bodies

The book traces wider developments in Ireland through the stories in the hospital – such as the changing role of religion and the growing impact of alcohol.

“When I went into that hospital back in the early ‘80s, we were very much still a Catholic society,” Prof O’Mahony said.
“Even though it was not a religiously-run institution, the hospital had a very, very Catholic ethos. I mentioned in the book for example, all the senior nursing posts in the hospital were held by nuns. That’s all gone within my professional lifetime.

“I wrote in the book about there being a big debate sometime in the late ‘80s about putting up a statue of Padre Pio in the grounds of the hospital. It didn’t happen in the end. But can you imagine that happening now in our multi-faith, no faith, secularised society?”

Prof O’Mahony noted that “alcohol liver cirrhosis was relatively uncommon” when he was a junior doctor in the mid-1980s. That has changed in the intervening years as “our alcohol consumption rose dramatically and significantly”.
“We experienced in my speciality of gastroenterology and liver disease an epidemic of alcohol-related liver disease over the last 10, 20 years. This disease constitutes the overwhelming majority of the inpatient acute workload of gastroenterologists… it’s a dramatic change.”

“My last day as a doctor. I rose early and was at my desk by eight.” Page 287, The Ministry of Bodies

The book was originally commissioned to be a year in the life of a hospital. However, during this time Prof O’Mahony decided to retire.

“It is a unique moment and it changes the tone of what I wrote completely,” he said.

“I started taking random notes, but a couple of months into it I decided I was going to go [retire]. That completely changes the tone and focus from a simple narrative of a year in a hospital to a mixture of diary, memoir, and reflection.
“It made it into a different, and I think, much better book.”

“I have little doubt – with the benefit of 40 years of hindsight – that my personality would have been better suited to a more contemplative life.” Page 3, The Ministry of Bodies

Prof O’Mahony is already an award-winning author of The Way We Die Now and Can Medicine Be Cured?. Has writing helped fulfil this desire for a more “contemplative life”?

“Yes, very much so,” he said. “I think medicine over most other careers, colonises the lives of its practitioners; it takes over. It’s very difficult for doctors to have a personal hinterland, to have perspective. It was only towards my 50s that I was able to develop this.”

Prof O’Mahony said that during his 20s, 30s, and 40s he was “consumed with getting to the next stage” of his career.
“But I certainly reached a different perspective in my 50s and it’s been a wonderful thing… it was largely accidental, this sort of second career, but I’m very grateful that it has happened… and yes writing has fulfilled another part of me that perhaps medicine didn’t entirely fulfil.”

“I went to the eye clinic for a check-up. I had a long wait. So this is what it’s like to be a patient. Waiting. Not Knowing.” Page 32, The Ministry of Bodies

Prof O’Mahony writes about a couple of recent experiences he had as a patient.

“There is a sort of new paradigm of the doctor-patient relationship,” he told MI. “This paradigm argues that we need to move away from the old model of the paternalistic doctor having all the power, all the knowledge… and the new paradigm is that all decisions should be shared, the patient comes with a lot of knowledge and that it is a relationship of equality.”

Prof O’Mahony thinks “that is all very well in theory”, but it didn’t chime with his own experience.

“I got admitted to a coronary care unit four years ago, which as you know, is a serious thing to happen. I remember at the time the cardiologist was anxious to go through all the risks, benefits, and the alternative treatments proposed.
“I felt weak and dependent; in fact, I felt as weak and dependent as a baby and I didn’t want agency, or control, or information, or choices. I simply wanted the doctors and nurses to look after me.

“I think when people are sick that is what they want, they don’t want to be faced with a whole load of difficult technical decisions; they want the doctor to do the right thing for them.

“I’m not sure this new paradigm is entirely correct. It is okay in theory when you are sitting at home, in the full of your health.”

“There are two kinds of doctor: icians and ologists, such as geriatricians and ophthalmologists…. The real difference, if I am to be truthful, is that icians are low status and ologists are high status.” Page 38, The Ministry of Bodies

“I had been a consultant for some years in a very good teaching hospital centre in Leeds,” Prof O’Mahony told MI.
“The focus of the work there was very much specialist, what I call ‘ology’ work. I came back to Cork and I realised that a huge amount of my work would be general things.”

Prof O’Mahony said that “a huge amount of general medicine” is looking after predominantly frail, older people coming into hospital with multiple issues; “it is essentially medicine of the older person.”

“Initially I found that frustrating… I was never going to develop as a sub-specialist, as an ‘ologist’, if I was doing all this general medicine, but after a while I changed my view on that.

“So I decided if the job required me to become an ‘ician’ I would become an ‘ician’ and enjoy it. In fact, my work as an ‘ician’ fed to a great extent into my first book about death and dying. What I thought initially was a professional step backwards turned out to be an unexpected opportunity and gift and it gave me a great insight. In the end it actually worked out.

“Obviously sometimes I wonder what life would have been like if I had stayed in the NHS and went on to become a super sub-specialist, but I think most of the time my life would not have been enriched as much as it was.”

Although the emergence of Covid-19 looms over the final few pages of the book, most of The Ministry of Bodies takes place before the pandemic.

“I initially thought ‘oh no, I’ve written a book about the pre-Covid world, this is going to significantly handicap it’… but I think there will be a rash of Covid-related books by doctors,” he said.

“I think what I’ve done has more to say about issues that will continue to engage doctors and the general public long after Covid is done. I’m happy the book is not about Covid… does the world need another perspective on Covid? I don’t think so.”

“I think there is no other profession where the consequences of failure and error are so catastrophic,” Prof O’Mahony said.

“I was saying to someone the other day in most walks of life if you make a mistake your colleagues gather around and say, ‘ah don’t worry nobody died.’ But you can’t say that in medicine.

“Because we are all human, doctors will… inevitably accrue failures and mistakes and despite that we still stigmatise failure.

“We have all this mantra now about working in teams, and that’s fine, we work in teams, but we are still blamed as individuals if something goes wrong. Failure is still incredibly stigmatised.”

Prof O’Mahony noted that Ireland is “supposed to be heading into a world of open disclosure. But the reality is doctors still don’t want to talk about their mistakes because they are so heavily punished for them, because they are so stigmatised about them, and because we operate in a medico-legal environment in this country that is no longer fit-for-purpose.”

“I think there is a consensus within both the medical and legal professions that is the case.

“I have been very clear in the book about the fallout of error, not only obviously on the poor patient involved, but also there is what they call the ‘second victim’ – the doctor who has made the mistake.”