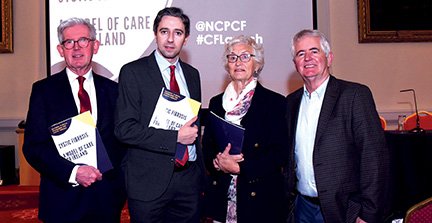 When cystic fibrosis (CF) is covered in the media, it is often in relation to access to the latest drug therapy. The Government and health service received significant criticism for lack of access to lumacaftor/ivacaftor (Orkambi) and ivacaftor (Kalydeco) before Minister for Health Simon Harris announced in April 2017 that a deal had been struck to provide CF patients in Ireland with State-funded access to the drugs.

HSE National Clinical Lead for Cystic Fibrosis Prof Charles Gallagher told the Medical Independent (MI) that it is important to remember that these drugs are not curative. He was speaking in relation to the launch of the first national model of care for people with CF, which was published in September.

“While these drugs have been important advances, they are an add-on and they aren’t curative,” Prof Gallagher said.

“To put it in perspective, if you look at CF for the last 30-40 years, we’ve had a gradually improving life expectancy in Ireland and internationally. And that happened before the drugs came. The drugs gave a further advance. They give an incremental benefit and that is important, but they are not disease-curing. And that is the reason for the model, in a way. While these drugs are very useful for most people, they are not useful for everybody. And they will not, at this time, eradicate cystic fibrosis.”

The model of care does not make recommendations on medications, but rather outlines how a comprehensive national service for CF care should operate. Prof Gallagher said an important reason for developing the model was the increasing number of people with cystic fibrosis (PWCF). It is projected that the adult CF population will increase by 75 per cent by 2025.

“People are living [with cystic fibrosis], and this is a good news story, and we have a lot more people with CF than we had in the past,” according to Prof Gallagher.

“So we are seeing a major increase in the number of people with cystic fibrosis. That was one of the things that underpinned our planning for the model.”

The document explains how CF care in Ireland must be delivered by a small number of designated specialist centres that are properly resourced and staffed. Currently, there are six paediatric and five adult specialist centres. While the bulk of care takes place in these centres, some CF patients are seen in other hospitals.

Under the model of care, some children with CF who live far away from their specialist centre may receive part of their care from a designated ‘shared care centre’ closer to home. The shared care centre must be in partnership with, and follow clinical guidelines from, the specialist CF centre, according to the proposals.

“What we are saying is that everybody with cystic fibrosis needs to be cared for in one of these centres,” Prof Gallagher told MI.

“They cannot be treated in other places unless they are formally, as is outlined in the model, allied to them.”

Specialist centres providing CF care should be formally accredited on a regular basis, according to a new model. The document states that the accreditation process would be taken by the proposed national cystic fibrosis office. Prof Gallagher said the clinical programme has “championed” the concept of accreditation.

“What we have done with this, we looked at all the international models out there,” according to Prof Gallagher.

“We then took the best of those to apply to the Irish population. This [accreditation] isn’t happening for most other diseases.”

The model of care states that specialist CF centres must have a multidisciplinary team of trained, experienced CF specialist medical, nursing, health and social care professional and administrative staff whose time is dedicated to the care of CF patients. It stresses the need to improve staffing levels for the centres, stating “most, if not all, CF centres are now understaffed in key areas”.

Staffing levels will be determined by the number of people with CF attending the centre.

In addition to recruiting nurses and healthcare professionals, the model of care says it is important in future that all centres employ more than one consultant specialising in cystic fibrosis.

“There are currently a number of centres that have only one CF consultant,” according to Prof Gallagher. “We have consultants not actually taking their full leave because of it.”

CF centres must have consultants with a special interest in cystic fibrosis in the following specialties: Endocrinology; gastroenterology; hepatology; nephrology; otorhino-laryngology (ENT); palliative care; psychiatry; and radiology, including interventional radiology and thoracic surgery.

Those CF centres that do not yet have one or more of these on-site should have clear referral pathways to these specialties.

Given the current difficulty recruiting and retaining both consultants and other healthcare staff, does Prof Gallagher believe these recommendations can be implemented?

“This model of care has been strongly endorsed by Minister Harris, Minister Finian McGrath and the Government. This is now HSE, Department of Health and Government policy. This was actually written by a team of people who were involved in delivering care to people with cystic fibrosis, but it is now the policy of the Government and the HSE and the Department of Health. And it is being championed by Minister Harris. This is the model… We are not focusing only on consultants. We are focusing also on people in a wide variety [of disciplines] — nurses, physiotherapists, dieticians.

The document also states that the expectations of the public for health improvement nowadays exceed the reality of day-to-day CF care.

“CF is still a chronic condition which causes major health issues and is an ongoing burden for PWCF,” according to the document.

“This ‘expectations gap’ is stressful for PWCF and their families and also for CF healthcare professionals. The rare cases of abuse (personal and on social media) of CF team members and nurses on CF wards has also made it harder to recruit and retain CF team members.”

People with CF should have regular outpatient/day care review by the specialist team every three months when medically stable, and more often when they are unwell or unstable. The document states that follow-up of PWCF post-lung transplantation is very important. It is a complex issue internationally, involving follow-up for transplant-related issues and also follow-up for CF-related issues. Because of its significance, the clinical programme will prepare a separate model of care document dedicated to the care of PWCF post-transplantation.

Now that the model has been published, the next priority will be to implement the recommendations. Again, Prof Gallagher stressed how the model is supported by all stakeholders and that the proposals were designed to be achievable.

“It was written with a lot of details of something that would be practical, that would be implementable, that would also be very good for people’s health in the long term,” according to Prof Gallagher.