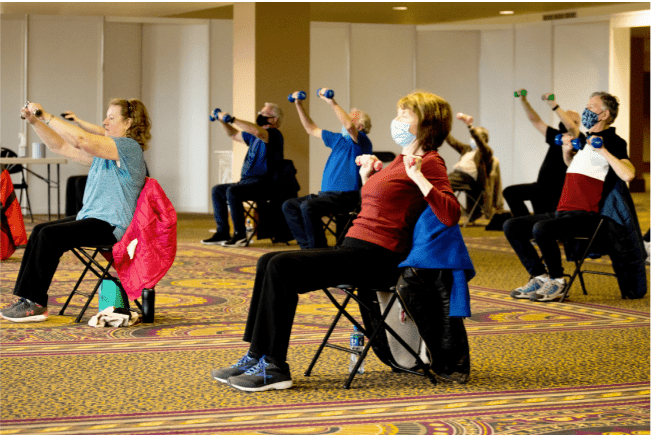 According to a summary of the programme: “The rationale behind ExWell Medical is that a large proportion of the disability and unwellness that comes with any longterm illness is caused by becoming deconditioned. At ExWell we can improve or reverse this with appropriate exercise thereby greatly enhancing a person’s quality-of-life.”

ExWell Medical was established in 2019 by Dr McCaffrey, a Consultant in Sports and Exercise Medicine in the National Orthopaedic Hospital Cappagh.

The programme has its origins in a pre-existing service based in Dublin City University (DCU) called MedEx, which had offered community-based chronic illness rehabilitation – on medical referral – to people with chronic illnesses though structured exercise classes.

“I started off with a phase 4 cardiac rehab programme at DCU,” Dr McCaffrey told the Medical Independent (MI). “It quickly spread to become pulmonary, diabetes, then chronic pain, cancer, Parkinson’s disease and MS [multiple sclerosis]. What became clear to us over time, with some exceptions, was that everybody needs the same intervention; it’s not really different for cardiac or pulmonary or other conditions.

“That insight led to our innovation, which was to bring all chronic illness cohorts into the same programme. Over time, we started offering our programmes based more on the functional capacity of the patient rather than the illness,” he said.

The MedEx centre has developed into the biggest centre of its kind in Europe, hosting 700 participant visits weekly and receiving up to 1,000 new referrals annually. It became clear there was an increasing need to offer the service outside DCU.

A decision was made by DCU not to become involved in the national roll-out. What followed was the formation of a new corporate entity, ExWell Medical CLG, in January 2019 with the aim of bringing the medically-led service to all parts of Ireland.

Three years after establishing the ExWell Medical initiative, Dr McCaffrey has just received a joint National Innovation
Award at the recent Future Health Summit. Extensive partnerships have evolved with State agencies, the HSE, sports bodies, GPs, local Government organisations, and businesses under a wide-ranging series of pilots across the country.

The HSE has funded two centres: In Citywest in Dublin and in Athlone for the Dublin Midlands Hospital Group. With the roll-out of the chronic disease management programme, Dr McCaffrey said ExWell Medical aimed to position itself as an aid to the ambulatory care hubs and integrated care programmes in community settings.

The ExWell Medical programme has been exploring the needs of specific groups with chronic illnesses; the role of exercise in preparing pre-operative cohorts for surgery; a ‘moving on’ programme for cancer survivors, teenage cancer survivors, and hard-toreach cohorts; and it was hoping to extend other services to children and adolescents in a new project called ExWell Junior.

Dr McCaffrey explained that most chronic illnesses are included in the programme. He said it also provides benefits in other areas. For example, clinical exercise has a huge role to play in preparation for elective surgery and cancer surgery because “it prepares people physically and mentally for surgery and enhances recovery”

Mental illness and chronic pain are other areas where the programme can make positive impacts. Regarding the latter, Dr McCaffrey noted there has been a “huge shift away” from medical treatments towards movement-based interventions.

“We surveyed participants to see how many had pain on a regular basis, four days a week, and the answer was 65 per cent. We then asked them, ‘What happened to your pain since you started on this programme’, which would have been four weeks earlier.

The answer was, in 95 per cent of cases, the pain either got better or did not change. In 5 per cent of cases, it got worse. There are two messages there: The presence of pain in itself is not a barrier to take part and it might
actually get better.”

Dr McCaffrey said the components of fitness are aerobic capacity; strength; flexibility; and balance. “The thing is that all of those elements of fitness have a fundamental impact on your quality-of-life. Once they fall below certain thresholds, you’ll notice it,” he said.

“The net effect of all of that, in the context of chronic illness, is social isolation, immobility and loneliness.

Layered on top of everything else, you get the mental unwellness element, which is just as important as the physical.

“We all get less active as we get older, but it’s worse in people with chronic illness for a number of reasons. They become either afraid of physical activity or perhaps specifically afraid of experiencing breathlessness, or they are told to be less active by us, all of which is a very bad idea.

“We can have an enormous impact on quality-of-life without fixing the illness, which is not fixable anyway, by appropriate exercise programmes and it has an absolutely transformative impact on people and on their families, because there is a lot of hidden distress around caring for people with chronic illness.

“What exercise does is very simple: It’s accessible; it empowers people to restore the joy of exercise and mobility; it restores hope and facilitates social engagement,” added the former Dublin GAA football player and All-Star.

The benefits of exercise are assessed by measuring strength, aerobic capacity, flexibility balance, and quality-of-life using validated measures. In a recent study carried out at a HSE-funded centre in Citywest, it was found that all key measures improved within six weeks.

“The extent of the improvement for some exceeded what is called the ‘minimally clinical important difference’, which is the level of meaningful difference on clinical impact. The final thing is the biggest impact is seen in those people who start off the worst. We knew that anyway, but it is nice to have it in black and white. In that context, nobody gets turned away. All we need is a little information about the person and their medication and off you go.”

Dr McCaffrey, who continues to personally deliver classes, highlighted that the programme was not aimed at primary prevention. “What we do is secondary prevention so we are dealing with rehabilitation of established illness.”

The programme has made a number of adaptations to ensure safety during the pandemic including online and outdoor activities and smaller group pods. ExWell Medical accepts referrals from all healthcare professionals including GPs, consultants, nurses, physiotherapists, occupational therapists, and dieticians. Referrals are by Healthmail only and details and forms are provided on the programme website.

Dr McCaffrey paid tribute to the “fantastic team” running the programme as well as the input from undergraduates in healthcare disciplines involved in ExWell. He was optimistic that the programme is on target to have 22 centres in 2022. “At the moment we have five in Dublin, four outside Dublin. We’re opening up two more outside Dublin in the near future and another five or six in Dublin. There’s interest from lots of places and I think we will easily make that target.”