A doctor’s poetic licence amidst Covid 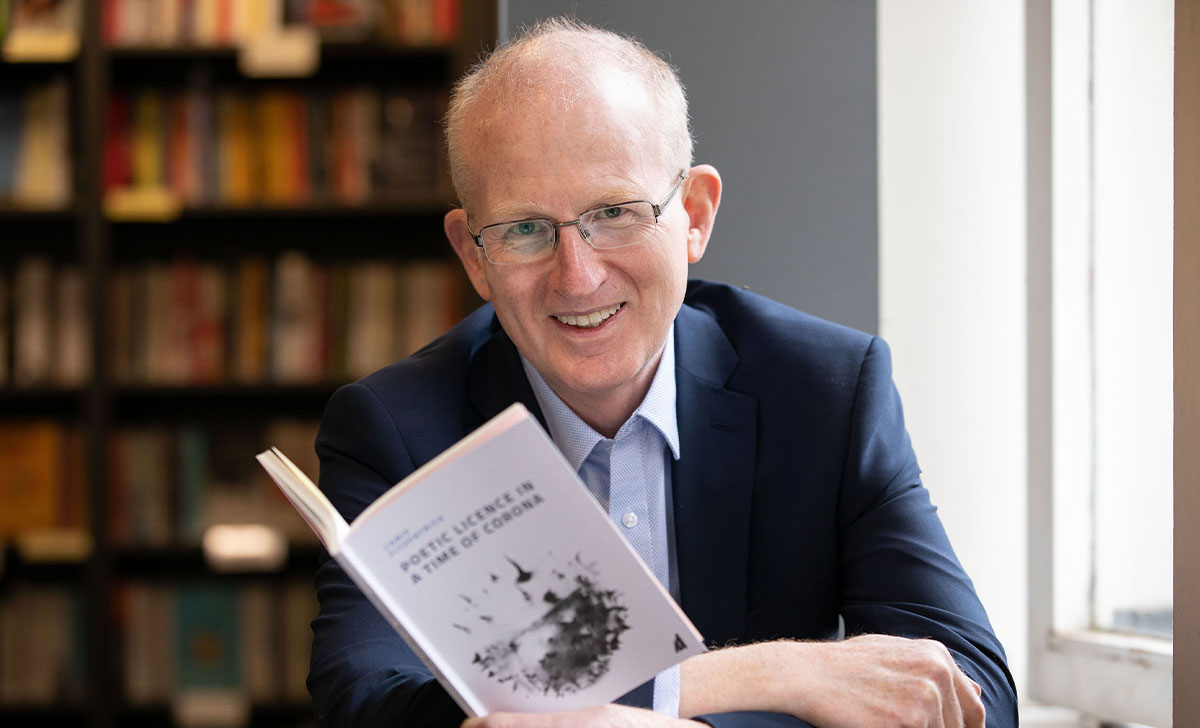 David Lynch talks to former Master of the Coombe Women and Infants University Hospital, Prof Chris Fitzpatrick, about his new book of poetry written during the pandemic.

“I think poetry and the arts will help to heal us – that’s the message I’d like to get across,” said Prof Chris Fitzpatrick, Consultant Obstetrician and Gynaecologist and former Master of the Coombe Women and Infants University Hospital, Dublin. Prof Fitzpatrick has arguably spent recent years testing his own theory.

His new poetry collection, Poetic Licence in a Time of Corona, chronicles the first two years of the pandemic. Having studied English before embarking on his medical career, Prof Fitzpatrick has always had a deep interest in the creative arts. However, the demands of medicine and a young family meant that his writing plans were often put to one side.

“It was a really busy household. You’ve got to create the time [for writing] and I only really wrote sporadically over my career,” he told the Medical Independent (MI).

However, in the months prior to the emergence of Covid-19, his writing routine became more regular. The outbreak of the global pandemic only intensified his new literary process.

“In the year leading up to Covid I had disciplined myself to write early in the morning and late in the evening,” Prof Fitzpatrick said.

“These were short intense bursts, often on the phone because it was convenient to do it that way. So I suppose I had got into a pattern of writing just before the pandemic.

“I always had an interest in literature, but over the last couple of years I’ve redeveloped a really significant interest in it. I had published some poetry and short stories along the way. I was involved with the Abbey Theatre in collaboration with the RCPI in an applied drama training programme for doctors.”

Then the year 2020 began and Covid-19 entered all our lives. As a doctor, the early period of the pandemic was a particularly intense time for Prof Fitzpatrick. However, his renewed writing routine continued despite the professional turmoil. The difference now was that the virus, and its impacts on life in Ireland and around the globe, was the main focus.

“The reason I started to write about Covid was that it was such a surreal time, and I wanted to recognise that this was a very unique experience. I just wanted to describe what I was seeing and feeling.”

“I suppose, it was also a form of escape at times. I’ve worked in the Coombe Hospital for nearly thirty years. But then overnight the hospital became almost unrecognisable. We had no visitors; we had big yellow Covid signs; we had the hospital divided into green zones and red zones; we were all wearing PPE.”

He described his writing process during the early months of the pandemic as “a way of processing what was happening, because it was all so unusual”.

“It was also a way of escaping.”

Writing was not the only form of “escape”. Like many others, the experience of lockdown sparked a renewed appreciation of nature on his doorstep.

“I think for most of us, nature became very important. I have the benefit of living near the Dodder [river],” Prof Fitzpatrick told MI.

“So I could walk down a stretch of the river that was within our radius during the initial lockdown.

“That became a great consolation. I began to see things and appreciate things I hadn’t before. And I wrote about them… then I began to think that maybe other people might be interested in it as well.”

The resulting collection touches on a wide variety of events, topics and observations.

At its launch in Hodges Figgis in Dublin last month, publisher Ms Alison Hackett said: “Peppered with lightness, moments of deep grief, and quirky side-steps, Poetic Licence In A Time Of Corona shows us how one man, who happened to be a doctor, made sense of the strangest of times.”

But there are also darker themes explored in the poetry. These include the death of Prof Fitzpatrick’s brother, the conf lict in Afghanistan, and the impact of the pandemic on older people.

“I also wrote a poem about nursing homes. Because looking back, I think there are many families who are in acute bereavement over what happened,” he said.

“It was one of the ‘frontlines’. Certainly, in the first wave of Covid, there were a large number of casualties in nursing homes. I think we have a sense of sadness, regret, remorse and a commitment to ensure that there is learning from what happened.

“And, also, a commitment to increase our preparedness for something like this happening again. I just wanted to write about that.”

The poems in Poetic Licence in a Time of Corona are in many styles. While all are untitled, they follow a chronological order through the twists and turns of the pandemic, both at a personal and global level.

He described his aim as wanting “to put that two years, that unique tragic sad period, within the covers of a book, to ref lect the range of emotions. What happened during Covid was very dramatic. So I think it kind of lent itself to writing,” Prof Fitzpatrick said. “I felt sort of compelled to write about it.”

“I think the poems are accessible. They’re untitled. They’re written in chronological order from the start to end, but you can dip into it. You can read it in any sequence you want to read it in.”

Prof Fitzpatrick believes that people often look to writing and other forms of art to make sense of life during a tumultuous period, such as the pandemic.

He recalled that in the early months of the crisis he went to a book shop to look for The Plague by Albert Camus.

“It was a book I’d read when I was in college, but it was sold out completely in the shop when I went looking for it,” Prof Fitzpatrick said.

“I ended up buying the last copy of Daniel Defoe’s A Journal of the Plague Year instead. It seemed to me that people were looking for something in writing or literature in relation to reading about people’s similar experiences [of pandemics] in history.”

“It deals with what happened in the corridors where the powerful decisions were made, in the Department of Health, in the HSE, in NPHET,” he said. “In contrast, although it covers the same time period, I see my book more as an internal monologue, it’s that period of time inside the mind of one person.

“I think it’s complementary to those narratives that will come out that will deal with the external, with the politics and with the public health record of what happened during that time.”

*Poetic Licence in a Time of Corona is published by Twenty First Century Renaissance www.21cr.ie.

On the way into work, a stranger stops

(two metres in front of me) and points to

where she has seen a kingfisher. She’s

beaming with delight. I thank her.

The bird is perched on a branch

at the riverbank. When it hits

the water, it’s a topaz-orange

When I leave, the kingfisher

is back on the branch.

As I meet other strangers

walking towards me, I tell them

where the kingfisher is.

January 2021 — ‘Dry land within reach/hit by a massive wave’

Despite the start of the Covid-19 vaccine roll-out, for many doctors and other healthcare workers, January 2021 was a uniquely dark period in the pandemic.

A major post-Christmas wave of Covid cases created serious challenges for all parts of the health service.

“I think it was particularly difficult during the surge we had after that Christmas,” said Prof Chris Fitzpatrick. “I think that is when people were at potentially their lowest ebb and their maximum period of exhaustion, [but] what they really did, they really rallied around.”

The dark weeks of January 2021 are recalled in a poem on page 24 of the collection (see poem, right).

“There was great optimism at the time with the vaccines coming out etc. That was a time when we thought we were in reach of dry land, then we were hit by this massive wave.”

Prof Fitzpatrick said that during the last two years “a lot of the anxiety and pressure” hit ” doctors and all healthcare professionals”.

“I would say it’s right across the board, from people working in ICU to those working in nursing homes, general practice, the ambulance service. Everyone.”

He speculated that “in order to do your job professionally during it [the pandemic], healthcare workers sort of postponed reflection on it”.

“Even while I was writing this, I could only write it in short compressed intense bursts. You just did not have the time to dwell on it. I think now when it’s all over, I think there is a form of post-traumatic stress that healthcare workers are going through.”

He said currently there “isn’t necessarily the space to deal with it, in the way you would ideally like to do so, because now we have to deal with the backlog of work that was postponed…”.

Prof Fitzpatrick said there is burnout and fatigue within the medical and healthcare professions.

“I think health workers postponed processing it [impact of the pandemic], with the intention of dealing with it later. But when you emerge from this [pandemic], it’s now busier in a different way.

“I’m working with the RCPI and the Abbey Theatre in relation to an artistic response to this. I think the hospitals and some of the other healthcare facilities will provide ongoing support to staff. I think there is a need [for that support].”

Prof Fitzpatrick is currently on a book tour around the country promoting his new collection of poetry. See www.21cr.ie/ for details of dates and locations.

hit by a massive wave, all

this time we have charts

know where the hidden rocks are

we keep the sails up

batten down the hatches

our most precious cargo

we mourn lives lost in

the surge, heartbreak is

a burden we bear too

with later, we signed

at breaking point, we

will not break, this ship will not go down