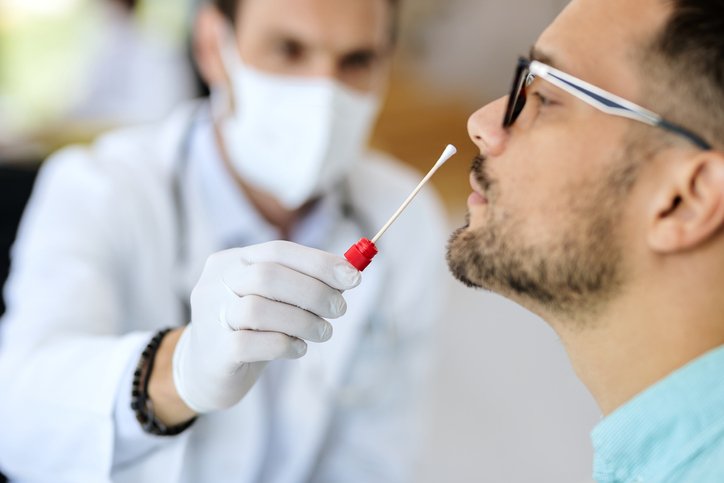 Close-up of young man getting PCR test at doctor's office during coronavirus epidemic.

More than 123,000 polymerase chain reaction (PCR) swab tests for Covid-19 have been taken from meat factory workers since the launch of a serial testing programme last year.

Serial testing involves testing of asymptomatic workers at meat factory plants and has been underway since last August. Each facility is tested once every four weeks.

Over 7,500 antigen test have been undertaken in hospital, food production and community settings to date as part of HSE antigen validation studies.

“The HSE has established significant national PCR capacity and this remains the recommended testing modality to identify SARS-CoV-2, and serial testing within the sector will continue for the foreseeable future,” said a HSE spokeswoman.

“In this context no targets for antigen usage within the sector have been determined. HSE continues to monitor emerging approaches to testing and is actively engaged with the sector.”

Minister for Health Stephen Donnelly has appointed the Government’s Chief Scientific Adviser, Prof Mark Ferguson, to lead an urgent review of rapid Covid-19 testing. A report is due mid-March.

According to the HSE, it will finalise its validation of the various assays over the coming weeks, and “continues to engage in discussions on the potential use of antigen where clinically indicated”.

Antigen testing is used in acute hospital settings and as a companion test to PCR but use of the method remains “extremely low”.

“The potential benefits of antigen will only become apparent over time, and the current levels of antigen usage are extremely low as PCR is widely available and more reliable than antigen,” said a spokeswoman.

Antigen testing is not as reliable as PCR in identifying Covid-19, but it is cheaper and results are produced more quickly than PCR tests.

“PCR has therefore been the principal testing approach since the pandemic began, and HSE has increased its PCR capacity substantially over the past year – both within the acute hospital and the community settings.  Antigen testing is suggested by ECDC and the WHO where there is low availability of PCR,” according to the HSE.