The definition of consent 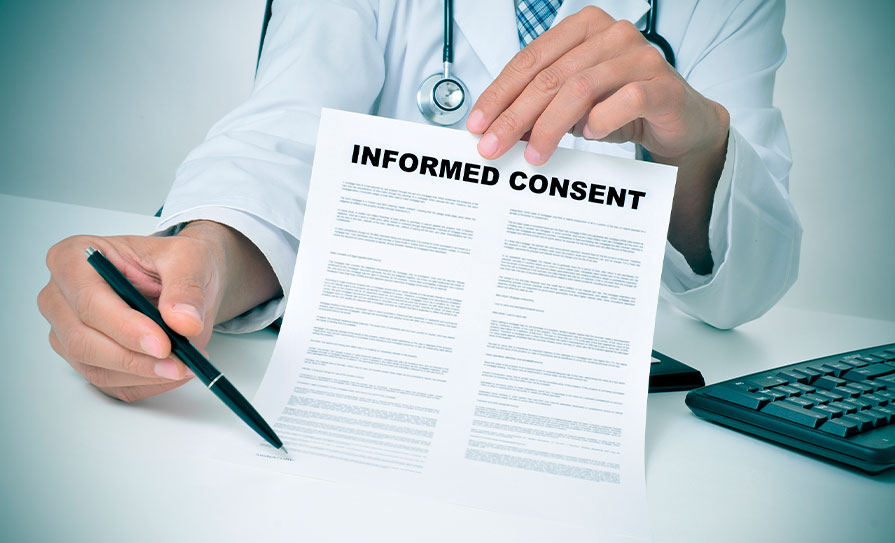 All medical professionals should have knowledge of the general doctrine of consent, informed consent, and consent forms in medical practice.

When patients consent to a procedure the most basic element is that they agree to a particular procedure, on a particular part of the body at a particular time. This rudimentary position encompasses the general doctrine of consent. It means that if the patient agrees to one operation, they do not get another. For example, if a patient consents to a right total hip replacement, they do not expect to undergo left leg varicose vein surgery. Another more realistic example might be a patient consenting to an examination under anaesthesia and not a total abdominal hysterectomy. Violating this agreement is called battery and is a criminal offence. The perpetrator is viewed as having committed an offence against the community and this is the reason why the penalty is imposed by society and may include incarceration.

The standard hospital consent form signed often on the day of surgery contains the patient’s name and details, the type of operation, the site, and the date. In this regard it fulfils the permission for the general doctrine of consent and may clarify the understanding of the patient if the doctor is subsequently charged with battery. Although doctors may get charged with battery, it is extremely rare.

When doctors run into trouble it is usually not for battery, but rather medical negligence. Unlike battery, medical negligence is not a criminal offence. It is a tort. In such cases the harm is against the individual rather than the community, hence compensation is owed to the person. In deciding whether medical negligence has occurred, the standard of care is judged via the Bolam principle. This considers whether the standard of care is acceptable to a responsible body of medical opinion. There may be two opposite views, but if there are responsible bodies of opinion for both then either is acceptable. The Bolam case dates back to 1957 when a patient suffered a fractured acetabulum during electro-convulsant therapy. In attempting to avoid such problems some doctors administered muscle relaxants or strapped the patient to the treatment table. Mr Bolam took the action because neither of these were used in his case. While the Court accepted that these treatments were standard practice for some doctors, they also accepted that there was a responsible body of medical opinion which used neither. As a result, Bolam lost the case. This standard of care is often referred to as the “reasonable doctor”.

Consent for medical procedures followed the Bolam principle until recently. In Montgomery vs NHS Lanarkshire (2015), Ms Montgomery was a diabetic woman of small stature who was pregnant with her first child. This meant that she was a higher risk than most for an obstructed labour. She had a trial of labour, but this was unsuccessful. She went on to have an emergency Caesarean section; however, unfortunately the baby suffered a neurological injury. She took an action against the Trust on the basis that if she had been made aware of the risks of vaginal delivery, she would have opted for an elective Caesarean. After several judgments the UK Supreme Court found in her favour. This verdict came against a background of society and then subsequently the courts moving away from a paternalistic view of medical treatment towards individual rights and autonomous decision-making. This “reasonable patient” view is now the standard for consent.

The Judge in the Montgomery case laid out what the “reasonable patient” was. Doctors must counsel their patients about the material risks of the treatment they are about to undergo. The judgment defined the test of material risk.

In modern medical practice this translates to doctors discussing the risks, benefits, and alternatives of treatment with the patient. This includes the option of no treatment. This process is called informed consent. It is a supported decision-making process shared between doctor and patient. The objective is to empower the patient to enable them, insofar as is possible, to make what they feel is the best decision for them. This should be completed well in advance of the procedure to give the patient time to reflect and to avoid any prospect that they are under duress to decide quickly. There is a significant body of case law which suggests that decisions made on or close to the day of the procedure are made “beyond the point of no return” and are not sound.

Doctors are excused such obligations if the patient chooses not to be informed, if the information is deemed detrimental to the patients’ health or in cases of necessity such as emergency surgery.

The presence of a signed consent form, while addressing the general doctrine of consent and the risk of battery, is not proof that material risk has been discussed. The evidence for this resides in the clinical notes and/or correspondence that results from the clinic visit at which the treatment was planned and agreed. The standard hospital consent forms with which doctors are most familiar play little if any role in the informed consent process. Given that these forms are almost invariably completed on the day of surgery, their objective should be to satisfy the general doctrine of consent with the type, site, and date of procedure.