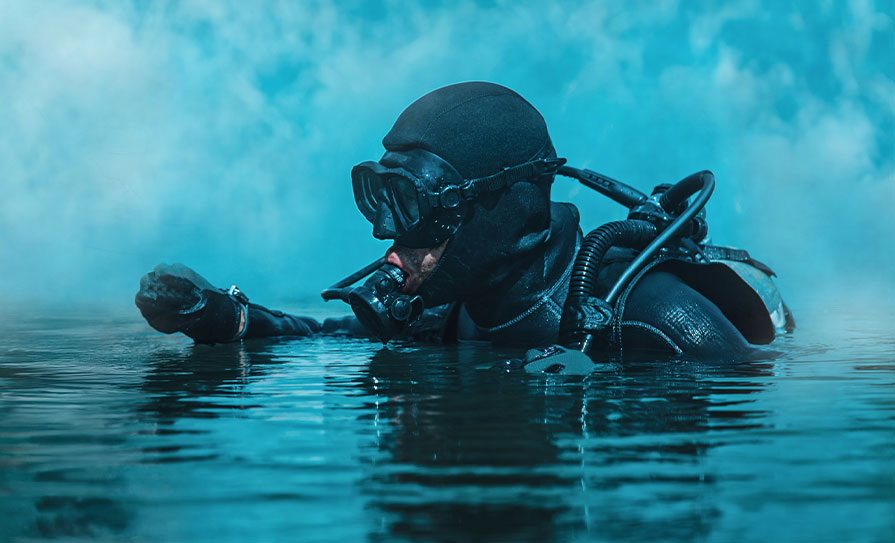 A recent immersive dive medicine training course with the Royal Navy in the Institute of Naval Medicine gave me an increased respect for the pitfalls of the diving medical assessment.

The diving medical is more complex than it initially appears and I would caution those who are unfamiliar with the specific stresses and strains of diving from giving medical advice to divers. Although there are very few dive medicine specialists in Ireland, a GP can undertake specific training in diving medicine from a number of providers. Non-dive specialist doctors may get the question following a new diagnosis or medication ‘Can I still dive, doc?’. Without sufficient understanding of the pressures involved or rigours on the body of the diving task, doctors may be inappropriately signing patients off to dive for whom it could be dangerous or even fatal.

Diving Ireland offers clear guidance on the medical requirements to dive, with each diver being required to fill out a medical disclaimer form on at least an annual basis. If the individual wishing to dive has no medical contraindications, has completed a diver’s fitness test to the satisfaction of the diving officer, and has an in-date medical examination, they may proceed to dive.

Diving Ireland’s guidance states that divers must have a medical examination when they first join diving Ireland, every three years from the age of 35, every year from the age of 55, and on each occasion there is a change in the diver’s medical status, a new diagnosis, medication or symptom.

For occupational divers and military divers there is stricter guidance available and these individuals will be managed by an occupational dive medicine specialist. This is because their diving is regulated by Section 77(2) of the Safety, Health, and Welfare at Work Act.

There is significant pressure acting on the body during diving. Once a diver enters the water, their body is dealing with hydrostatic pressure (the pressure of the water above them) as well as the normal atmospheric pressure that acts on all of us at sea level. The initial 10m descent into the water carries the highest increase in pressure. The pressure on the body at 10m is double that at one atmosphere or sea level. Although the pressure continues to increase with descent, it is increasing most rapidly during this initial 10m.

Any underlying medical condition that has a risk of sudden incapacitation while at depth could potentially be fatal while diving. If a person has asthma for example, there is a requirement to undergo pulmonary function testing prior to commencing diving. A thorough history and examination should be undertaken in order to properly assess whether an asthmatic person could be permitted to dive. Many of the common triggers for asthma (cold, exertion) are encountered during diving. Any suggestion of lung disease generally requires a careful evaluation prior to diving due to the risk of air trapping in scarred lung tissue. It is important to bear in mind that an individual with a small area of lung scarring may have normal pulmonary functions tests and a normal chest x-ray. Any previous history of lung disease, particularly of pneumothoraces, radiotherapy or other potentially damaging treatments or trauma to the thorax, should be carefully evaluated.

Conditions that cause lung scarring can create pockets of tissue vulnerable to air trapping. Air trapping can lead to a fatal complication of diving, the arterial gas embolism (AGE). The presentation usually occurs on resurfacing from a dive, whereby the diver may collapse and lose consciousness. Though reasonably rare, AGE is a significant cause of mortality in divers. The risk of AGE is still present in those only diving at shallow depths; however, the risk can increase with repeated and prolonged diving.

Cardiovascular disease needs careful evaluation and optimisation prior to diving. Individuals with uncontrolled hypertension or significant structural cardiac disease should not dive.

BMI should be evaluated for all divers prior to commencement of diving and during every follow-up medical. This should be combined with waist circumference for appropriate assessment of risk. Recreational divers with a BMI of 30 or greater, require a consultation with Diving Ireland’s Medical Advisor. Those individuals are generally not permitted to dive in an occupational context until their BMI has been reduced to <30. Evidently these numbers must be considered in the context of the individual; however, this is the general guidance.

The most common non-fatal injuries reported by divers are ear and sinus barotrauma, as well as decompression illness.

Barotrauma is essentially the physical damage to the body’s tissues caused by the pressure changes occurring at depth. Anywhere there is a closed space in the body, eg, blocked sinuses, can experience painful injury as gas expansion occurs. Barotrauma can also occur to tissue outside of closed spaces as the increased pressure is hydrostatically transmitted through the body’s tissues.

Mild sinus congestion can be enough to cause difficulties when diving. Any diver with sinusitis or upper respiratory tract symptoms should not dive, even if they have taken decongestants and the problem has temporarily resolved. This is because during the day’s diving activities the decongestants may wear off or not be fully effective during ascent and can lead to barotrauma injury.

The middle ear is vulnerable to barotrauma which can lead to bruising/injection of the tympanic membrane. This can present as ear pain, ringing, hearing loss or a sensation of fullness in the ear. If the barotrauma is severe the pressure can be transmitted into the inner ear and lead to permanent hearing loss. If ear plugs are used during diving, this can exacerbate the risk of barotrauma by creating an enclosed space where pressure can build.

Pulmonary barotrauma is less common but very serious when it occurs. If during ascent from a dive, the diver does not exhale thoroughly, the gas volume within the lungs will expand and cause damage to the lung tissue, pulmonary barotrauma. This can lead to pneumothorax, pneumomediastinum, or arterial gas embolism. The presentation of pulmonary barotrauma is acute on surfacing from the water, with chest pain, dyspnoea, or loss of consciousness being common initial symptoms.

Most doctors will have heard of ‘the Bends’, a colloquial term for decompression illness (DCI). DCI is caused by bubbles of gas, usually nitrogen. Nitrogen is dissolved in the body during descent due to the pressure exerted on it. However, once the diver begins to ascend, it can begin to form gas bubbles as the pressure eases. These bubbles can have various negative impacts on body functioning depending on where they settle in the bloodstream or the body tissues. For this reason, DCI has variable presentations in terms of symptomatology as well as severity.

Commonly, a diver can present with joint pain or tingling/numbness in a single area that self resolves. Another common manifestation is the ‘skin bends’ or cutis marmorata, where there is an irregular erythematous rash that eventually becomes mottled. This may appear in isolation or with other DCI symptoms. Constitutional DCI is more difficult to diagnose and may present many hours after diving has ceased. It may be vague in its presentation, with personality changes, memory difficulties or just ‘not being oneself’. If there are acute behavioural or personality changes soon after diving, this diagnosis should be considered. DCI can also present with severe neurological symptoms and can in rare cases be fatal.

The timeline of returning to diving after an episode of decompression illness should be decided by a clinician experienced in this area. However, familiarity with the return to diving and return to flying timelines is also useful for the general practitioner. After an episode of decompression illness, depending on the severity of symptoms a person may be permitted to return to diving once a specified period of time has elapsed. If the person experienced only single joint pain DCI that fully resolved soon after diving ceased, they may be able to return to diving after as little as two weeks. However, if there are mild neurological symptoms, this is extended to at least six weeks, and if there are any residual symptoms or if symptoms were severe it is not advisable to return to diving. These last two categories should see a specialist before recommencing diving.

‘The Narcs’ is an acute intoxication-like state that is typically caused by breathing in nitrogen gas through the scuba tanks of compressed air. The combination of high pressure and compressed gas can cause a change in consciousness that can mimic intoxication with alcohol. The diver’s hand-eye coordination, speech, and even higher cognitive processes, such as situational judgement and risk perception, can be impaired. The affected diver needs to be supported to ascend to the surface in a safe manner as they can present a danger to themselves and others at depth due to their compromised decision-making abilities.

As an individual may be under significant physical and mental stress if they encounter a hazard at depth, it is important that they are mentally robust to manage this situation. Others may be depending on them to behave safely in a buddy system or need to rely on them in an emergency. Therefore, a history of serious mental illness where the person’s judgement or behaviour is impaired would generally be a contraindication to diving. A history of suicidal ideation or moderate-to-severe depression should also prompt a thorough evaluation.

Ireland has robust guidance governing the medical certification of divers. The protocols covering usage of the scuba diving equipment, its maintenance and the composition/ mixing of gases is also stringent. Many preventable injuries and fatalities worldwide are caused by mechanical error of poorly maintained diving equipment, defective CO2 scrubbers, or incorrect gas percentage mixtures. In some holiday destinations frequented by Irish travellers, there is neither a medical screening for diving nor robust oversight of the life-support equipment and consumables used. It is important to bear this in mind if you are approached to certify someone as fit to dive abroad.

If you are certifying diver fitness, you will need to check with your medical indemnifier that you are covered to do so.