A contemplative and instructive history of mental illness 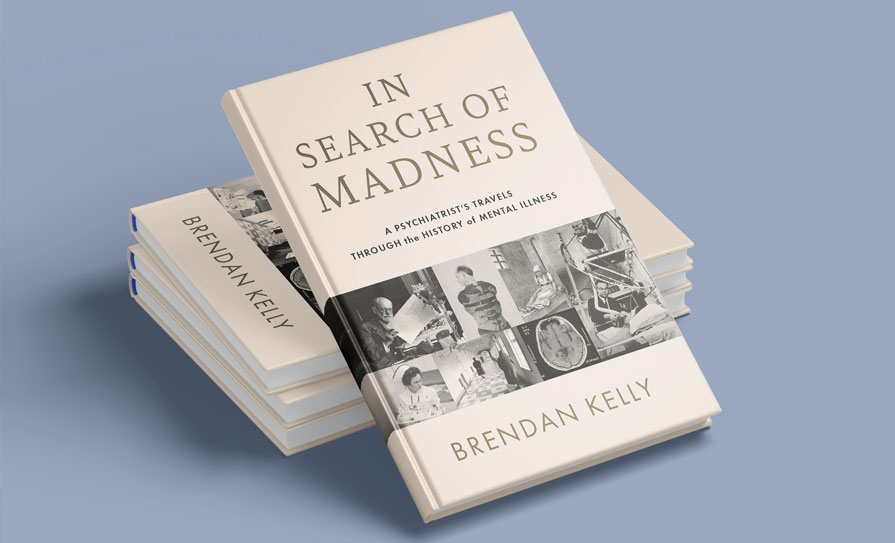 Title: In Search of Madness: A Psychiatrist’s Travels through the History of Mental Illness

Prof Brendan Kelly’s latest book manages to satisfy that very difficult space between the expert and the general reader. In short, it is of value to the psychiatrist, the medical historian or the human rights activist, whilst still being accessible to all others.

Shadows of his previous books are visible such that this work ties together many of the core ideas running through previous publications on the history of psychiatry, mental health legislation, and mental health service provision. It combines travelogue, historiography, and a primer of psychiatric practice. It is to be especially recommended to any young person thinking about a career in the care of those who are psychologically unwell.

Each chapter has a clever tripartite device. The author introduces each chapter with a relevant clinical setting; for example, the case of a man with schizophrenia who has been admitted long-term and is institutionalised.

Then he proceeds to describe himself (in the present tense) in a location where he appears to be writing the text that we are reading and which is related to, or at least a starting point for, the subject at hand. Lastly, he proceeds to discuss the history, development or flaws of psychiatric practice congruent with the case at the beginning. It is contemplative and instructive.

This reader found himself alongside Kelly in such diverse locations as India, Rome, Antwerp, Bethlem, and the Strand Bookstore in New York.

Many familiar topics are engaged, some of which appear regularly in commentaries on psychiatric practice (hello again to Ken Kesey’s One Flew Over The Cuckoo’s Nest), but this is not unwelcome.

The book serves as a compendium of material that those interested in the history of psychiatric practice, or indeed current practice, ought to know – Penrose’s Law, Franco Basaglia, the Soviet use of psychiatry, Aktion T4, and many more are all discussed. Kelly, as he has been in other works, is a perspicacious thinker who manages to distil many complex issues down to comprehensible sets of ideas and we are always clear where he stands.

The book exposes psychiatry’s great weakness – its appetite for therapeutic enthusiasms in its wish to provide relief from distress.

He offers a critique of past and current practices, but also manages a defence of psychiatry by discussing decreased admission rates (in particular involuntary admissions), the efficacy of psychiatric medications (even compared to other disciplines’ treatments) and reducing suicide rates. All of his assertions are well supported by substantial reference.

Kelly’s writing style is not overbearing and so some of the points he wants to get across are made gently, but soundly. He writes about the role of poverty in major mental illness, the North/South global divide, the recent tendency for the media to discuss mental health rather than mental illness and the “bewildering” low yield from neuroscience both in terms of diagnosis and treatment.

For some time, many of us have observed Kelly’s output and wondered just how does he do it? At least part of the answer is contained in this book.

He wastes very little time and writes as he goes. I remember once coming across an item that I thought would be useful for him in a book he was writing at the time. I rang him with the material and I soon became aware that he was typing at the other end of the phone, not, mind you, taking notes, but entering the information directly into the text complete with the reference.

In Search of Madness is thoroughly referenced and indexed, as is always the case with Kelly’s books. There is a recommended further reading section and the author has helpfully put the texts of special importance in bold. These amount to eight books and one magazine article and include well known works by Tom Burns, Anthony Clare, Lucy Foulkes, and Edward Shorter.

Works by two other Irish psychiatrists are included in the nine: Veronica O’Keane’s The Rag and Bone Shop: How We Make Memories and Memories Make Us, and John Tobin’s A Terrible Aberration: When Doctors and Health Professionals Compromise their Medical Ethics at the Bidding of the State. It is typical of Kelly’s wide range of sources and reference points that the magazine article is from the health and beauty section of Elle.

Dr Aidan Collins is a Consultant Psychiatrist and published a history of St Vincent’s Hospital, Fairview in 2007