Diagnosis and management of COPD in 2019 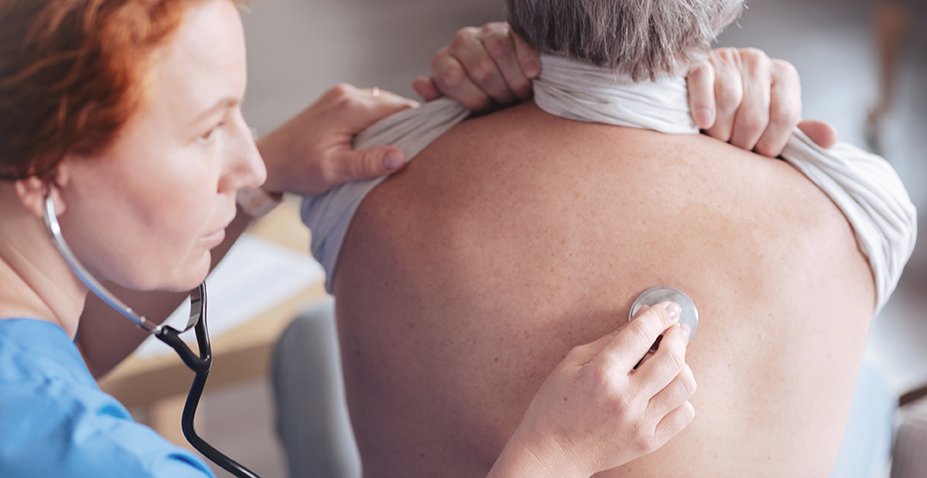 Regular check up. Scaled up look on serious female medical worker focusing her attention while holding a stethoscope and listening to lung sounds of a male patient.

This article reviews the diagnosis, classification and treatment of patients with chronic obstructive pulmonary disease (COPD) based on the 2019 Global Initiative for Chronic Obstructive Lung Disease (GOLD) guidelines. The content identifies the key features of COPD recognition and diagnosis and recommends an approach to the management of COPD which considers treatable traits, as well as reviewing the approach to the management of COPD exacerbations

The newly updated 2019 GOLD guidelines for the management of COPD continue on a trend set in recent editions of the guidelines of shifting the focus in COPD from lung function to treatable traits. While spirometry remains essential for the diagnosis of COPD, the focus for treatment has shifted to clinical criteria.

The choice of initial pharmacology in COPD is a difficult one, as the evidence-base to support this treatment choice is limited. The 2019 GOLD guidelines suggest that patients can be commenced on different inhaler regimens based on their initial classification. There is, however, no one-size-fits-all approach in COPD, and choice of inhaled therapy should be an individualised discussion between doctor and patient in each case.

Patients with COPD are recognised to have one of two predominant clinical traits; dyspnoea and exacerbations. The newest iteration of the GOLD guidelines recommends changes to treatment based on the presence of whichever trait is most bothersome to the patient.

There are patients who are breathless, whereby dyspnoea is the main feature. These patients benefit from bronchodilators which improve airflow and thus can ease their symptoms. If these patients do not respond to their maximal LAMA/LABA, then switching to alternative inhaler devices or an alternative molecule is an appropriate treatment step. It is important to consider the prevalence of other co-morbidities when assessing patients with COPD that remain breathless after adequate inhaler treatment. Failure of inhaled therapy to respond to treatment should prompt a GP or hospital doctor to assess for other causes of dyspnoea in these patients.

However, this benefit has to be weighed against the increased risk of pneumonia associated with inhaled corticosteroids, as observed in this case report. This has been established in several clinical trials over the last decade. The presence of a pneumonia should prompt consideration of withdrawal of inhaled corticosteroids, as the morbidity of pneumonia may be higher than the benefit these medications provide.

Once the exacerbating patient is on maximal inhaled therapy, there are limited options to prevent recurrent exacerbations. Azithromycin (250mg/day or 500mg three times per week) is a macrolide antibiotic, which has good evidence supporting its use in preventing exacerbations, in particular when the patient is not smoking. The benefit of a reduced exacerbation rate needs to be weighed against the risks of prolonged QT interval, hearing loss and potential for development of resistant infections. This article’s case report and discussion serve to highlight the
importance of individualisation of therapy in patients with COPD.

In relation to the severe exacerbation described in the featured case report, the use of oral steroids in COPD has undergone significant change in recent years. Oral corticosteroids are equivalent to intravenous dosing for the treatment of COPD exacerbations. A course of five days of prednisolone provides the same benefit as a longer course without exposing the patient to unnecessary risk.

With regard to the use of non-invasive ventilation (NIV) in COPD, it remains an essential aspect of care for the acutely hypercapnic patient, and the utility of NIV has widely been demonstrated to reduce mortality from type 2 respiratory failure in acute respiratory failures. The role for NIV in chronic management of COPD is less established. It has been demonstrated to increase the time to hospitalisation and death, but in clinical trials assessing its effectiveness, patient selection and follow-up have been very rigid, suggesting when used, it should be used under close supervision only at present.

A 63-year-old man presented to the general respiratory clinic. He had been diagnosed aged 61 with chronic obstructive pulmonary disease (COPD) by his GP after spirometry performed in his local practice, and was referred for assessment as he had three exacerbations in the last year requiring oral antibiotics and steroids and was becoming more breathless on exertion.

On review in the respiratory OPD, he admitted to a 40-pack year smoking history and continued to smoke three-to-four cigarettes per day. He described dyspnoea, present over the last number of years, which resulted in him having to stop after 10 minutes walking on flat ground, and was slower than his peers when golfing. When he initially developed symptoms, his GP commenced him on a long-acting muscarinic antagonist (LAMA) as a single inhaled therapy. However, the patient’s main complaint was he felt that after each exacerbation, he became more dyspnoeic, and struggled to achieve his usual baseline prior to having another exacerbation.

On examination, there was evidence of tar-staining on his fingertips, no evidence of nasal polyps, no clubbing or lymphadenopathy and he had a diffuse, mild wheeze on examination.

Spirometry confirmed fixed airflow obstruction with FEV1/FVC of 0.6. The FEV1 was 48 per cent predicted. Diffusing capacity of the lung for carbon monoxide (DLCO) was measured at 70 per cent predicted, thus confirming the suspected diagnosis of COPD. Blood testing demonstrated an eosinophil count of 0.2 (normal range 0.04 to 0.4), ie, 200/µL.

A discussion was held with the patient in relation to his symptoms and both patient and doctor agreed with a multi-modal approach to therapy.

The dangers that continued smoking would have on his health were discussed with him. He expressed a desire to quit smoking and thus, he was commenced on nicotine replacement therapy at a tapering regimen and linked to the smoking cessation clinic. He was referred to a pulmonary rehabilitation programme to improve his breathlessness. He was advised to speak with his GP in relation to pneumococcal and influenza vaccination and their rationale explained to him. After discussion of the risk/benefit ratio of inhaled corticosteroids, he was commenced on a long-acting beta agonist/inhaled corticosteroid combination inhaler (LABA/ICS). He demonstrated effective inhaler technique prior to leaving the clinic.

At review in three months’ time, he reported feeling better. He reported that he had improved exercise tolerance, now only needing to stop on strenuous exertion. He no longer smoked, and after demonstrating effective inhaler technique, he was discharged to his GP.

Unfortunately, 10 months later, he was admitted to the hospital with community-acquired pneumonia, which provoked an exacerbation of COPD. On arrival to the hospital, he was acutely unwell, with tachypnoea, tachycardia, hypotension and hypoxia. He had a diffuse wheeze and bronchial breathing in the right mid zone.

After initial fluid resuscitation, administration of intravenous antibiotics, oral steroids and initial nebulised bronchodilators, an ABG on room air demonstrated a pH of 7.23, PO2 of 7.8 and a pCO2 of 7.6 (reference range needed). He was diagnosed with type 2 respiratory failure secondary to his COPD, provoked by pneumonia. He was commenced on non-invasive ventilation (NIV) and admitted to the respiratory ward. While in hospital, his medications were reviewed by his respiratory consultant. A decision was made to discontinue his ICS, instead switchvng to a LAMA/LABA. The type 2 respiratory failure resolved over the next 24-36 hours. He was treated with five days of oral steroids. He improved from a pneumonia perspective, but remained dyspnoeic when being discharged from hospital. Consequently, he was referred to pulmonary rehabilitation again.

He was reviewed in clinic two months later after resolution of his pneumonia. His dyspnoea havd improved and he remained exacerbation free. A repeat chest x-ray demonstrated resolution of the pneumonia, and he was continued on the same inhaled regimen. After further review in the clinic six and 12 months later, he was noted to remain well, with no further exacerbations, ongoing moderate dyspnoea (mMRC grade 2 dyspnoea). His inhaler regimen remained unchanged and he continued to demonstrate good inhaler technique.