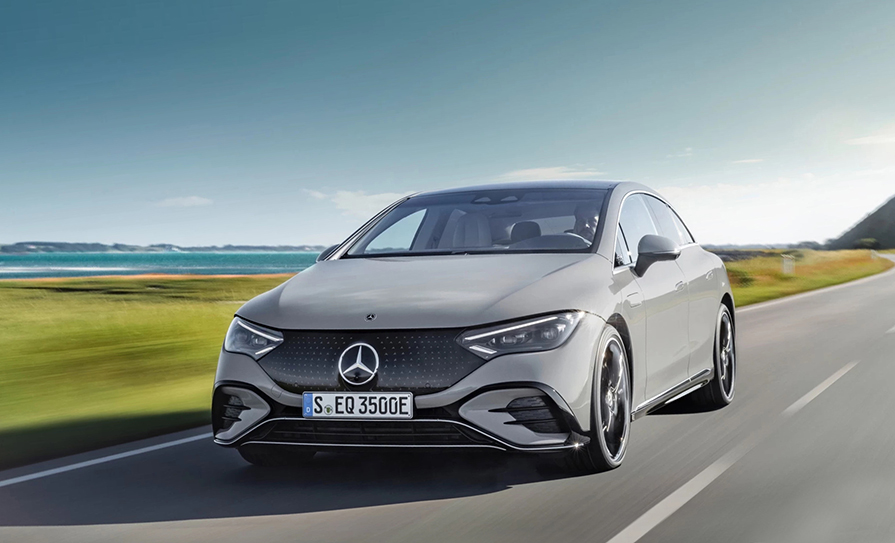 As a family we have owned a Mercedes for 20 years, a sum total of two cars. We have no intention of selling the second, yet. Our current E200 has proven to be comfortable, solid, and dependable, if a little slow. We’ll come to that later.

I had the privilege of testing the EQE recently. Despite being a petrol-head (there’s a strong family history), I love electric cars. The smoothness complements the EQE’s character exceptionally well. With passengers new to electric driving, I love surprising them with the quiet and smooth start.

Many electric cars give an electric purr as they progress. Not the EQE. If anything, there’s a little bit of tyre noise, entirely dependent on the road surface.

Safety is famously associated with the Mercedes brand, and the EQE raises passive safety to a new level. We know about active brake assist that stops the car in an emergency if the driver doesn’t. Now it’s upgraded to tension the seat belts repeatedly and flash red on the ambient cabin lighting before anchoring the car to the ground. I’m not sure how grateful I am to let everyone in the car know I’m not paying full attention.

Recently, I was stopped at a T-junction waiting to turn right. A driver in front (coming from the left) had stopped and the driver on the right was slowing with his left indicator on, so I made a dash across the road. It’s not a situation you can repeat too often on an open road. I didn’t know exactly what was chirping and flashing at me, but it was obvious the EQE didn’t like what I was doing.

It is a Mercedes, so the standard air suspension copes well with whatever the Irish roads can throw at it. Rear seat-room is good, with plenty of leg-room despite the battery using the underfloor area.

I’ve learned that Mercedes navigation uses ‘what3words’, a system to identify any location with a resolution of about three metres. Of course, you have to use the website or the app to find your unique three words. You might suggest the eircode, but ‘what3words’ works anywhere, whether it’s along a motorway or up an unmapped country lane.

One of the first questions I get asked about any electric car is the range. The dash showed 483kms for 99 per cent charge when I got it, so take it that’s 500km or 300 miles. At an average speed of 100kph or 60mph, that’s five hours driving non-stop. With a fast charger, I got from 50-to-80 per cent in 40 minutes. That’s 150km. The secret is to charge it at home and leave the house every day with a full tank.

The base price of the EQE starts at €85,703, and you can get to pay up to twice that with options and performance. The 350+ model is rated at 0-100kmh of 7.4 seconds, also called fast enough, but much quicker models are available. The base model is much quicker than the family E200. Personally, I’d add the four-wheel steer and the optional extra motor for four-wheel drive. There’s only so much adhesion two tyres can provide on wet tarmac as the EQE weighs over two tonnes and I’m cornering a bit fast. Don’t worry, the silicon chip inside the engine will look after you.

Towards the end of the test, I was driving the EQE home along the motorway. Adaptive cruise control was engaged, as was lane assist. As I was driving, it adapted to the speed of the car in front, and the steering wheel gave the occasional nudges as it felt I was a bit close to the edge. The lane assist had turned from an intrusive, grumpy, reluctant assistant to a gentle, new best friend. Something relaxing was playing on Lyric FM, and I felt no matter what happened, the EQE would look after me…. It felt safe, comfortable, solid, and relaxed. Looks like it’s bordering on S-Class territory.