The graphic art of medicine 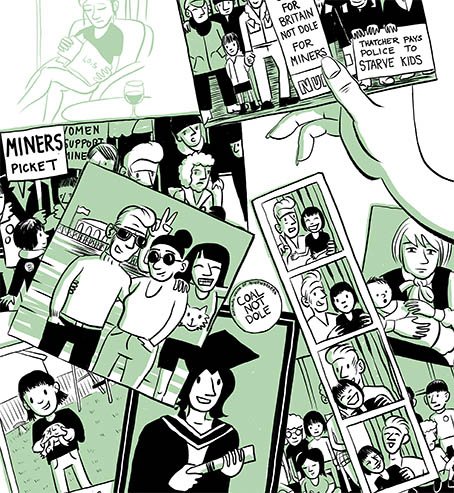 Dr Ian Williams is the author of two graphic novels: The Bad Doctor, a semi-autobiographical book about a rural GP and his patients, and a follow-up novel, The Lady Doctor.

As the person who coined the term ‘graphic medicine’ can you tell us a little more about it?

‘Graphic medicine’ is whatever goes on at the interface between the medium of comics and the discourse of healthcare. It is an area of interest, study, and practice. It is a movement for change, founded on progressive and egalitarian principles, but, most of all, it is a community. The term encompasses autobiographical comics and graphic novels, made by people who have experienced illness or disability first-hand, stories about care-giving made by healthcare professionals, patient education comics, and work that has been made as a therapeutic intervention.

Why do you think there has been such a big interest in graphic medicine at the moment?

It seems to have caught a wave, and I’m sure the causes are multi-factorial. The growth, and subsequent ubiquity of social media is probably one factor. I noticed something was starting to happen back in 2007 when I set up the GraphicMedicine.org website – people had started to make comics work about illness and disability, or caregiving, but they were working in isolation. The website and the conferences formed a hub around which a community developed. A lot of comics people were on twitter back when it felt like a positive, helpful thing, rather than a platform for outrage and bullying and word spread rapidly through that medium.

People started sharing comics they were working on. There has also, one could argue, been a visual turn in the nature of literacy as younger people gain as much information and instruction from videos, gaming and comics as from traditional text sources.

Graphic medicine, because of comics’ cultural history as a radical and underground medium, can address heavyweight issues with irony and humour (although comics do not have to be funny) and there are some issues that are maybe better addressed in a visual medium because of difficulties in textual language and cultural emotional sensitivities.

You have written two successful graphic novels based on characters who are doctors. Are many other healthcare professionals creating work in this genre?

Yes. There are a handful of doctors around the world creating comics about their experiences, but there are also nurses (MK Czerwiec, aka Comic Nurse, being a fine example), physiotherapists, psychotherapists, and other allied healthcare professionals. I have to say, however, that it is still more common to find comics artists who are interested in issues of healthcare and illness, than it is to find healthcare professionals.

Both of your books deal with doctors who might be considered flawed – one with mental health problems and another with a fairly unhealthy attitude to alcohol. How has your presentation of doctors who are ‘less than perfect’ been received by the medical establishment and your colleagues?

Very well, on the whole, although I was a bit nervous before the release of each book. Before the first book was published I was at a job interview for a GP maternity locum and I dared not tell them that I had a comic book called The Bad Doctor coming out.

I wasn’t sure whether or not I was going to admit that it was semi-autobiographical – I thought I would never get another job – until The Independent newspaper asked me to write an article about OCD and then I just thought ‘sod it, let’s do this’. I’ve not had a single negative response, although the people who think badly of me just keep schtum.

I’ve had lots of people say that they identify with Iwan’s problems (Iwan James is the main character in The Bad Doctor) and, to be fair, there is probably a higher-than-average incidence of OCD amongst medics, so maybe I should have expected that.

With regards to The Lady Doctor, the medical profession, or at least our generation of doctors, could give musicians, writers, lawyers, and dockworkers a run for their money where heavy drinking is concerned.

Having said that, many medics get more conservative as they grow older and tend to be quite judgemental about patients’ life choices and behaviour, which is one of the themes of the book.

Can you tell us about the sorts of work that will be presenting as part of the graphic medicine exhibition at dotMD this year?

I have invited a number of comics artists whose work I admire, and is relevant to graphic medicine, to allow us to show some digital reproductions of their work. This will cover a wide selection of subject matter and styles, ranging from the autobiographical to the educational. Given that dotMD is aimed at doctors, in particular, I have tried to include as many medics who make comics work, as I can. I think that work depicting the practice of healthcare is particularly interesting, and, as MK Czerwiec is one of the invited speakers at dotMD I will be showcasing some of her work.