The season ends empty-handed, but plenty of positives for footballing medics 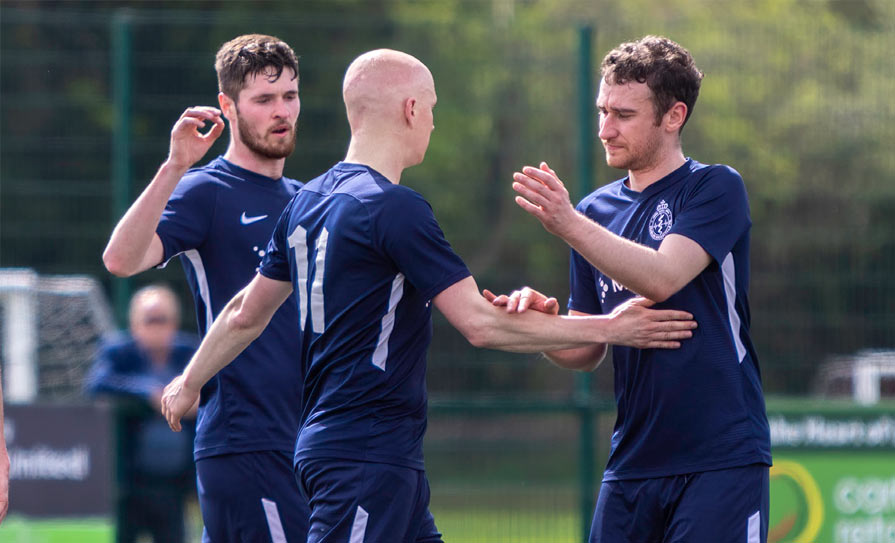 Dublin Hospitals FC’s (DHFC) first full season has come to an end. In a hugely successful year, which has seen the club expand from St Vincent’s FC to incorporate all Dublin hospitals, the off-field successes have been matched by some memorable moments on it, with the Medical Independent capturing them all.

Outside of the Leinster Senior League (LSL) and FAI cup competitions, there has been continued work behind the scenes leading to increased student participation as well as maintaining close connections with established players.

This year has also seen Dublin Hospitals Women’s FC become a reality. The club is open to new members right now and provides a unique opportunity for medics in Dublin to get involved with regular football. More information can be found at the club social media channels and at the club website where prospective players can register their interest.

Find out here how the men’s season drew to a close.

DHFC shares a good relationship with Crumlin United, with the Dublin 12 club hosting home fixtures and training. So despite this being an away draw, it was played on familiar soil. In an evenly contested game, it was the doctors who managed to find that extra gear to make it through to the quarter-finals. Captained by Andrew Delany on his 250th appearance, the medics were always going to be difficult to break down and the clean sheet proved to be crucial. Oisin Pennycook was dangerous from the start, putting in a player of the match performance and prompting the opposition to double up on him when in possession. With extra-time looming, Ian Daly and Gavin Kane, making his 100th club appearance, won a late corner kick following some neat interplay. A typically well-delivered John Cosgrove set piece proved impossible to clear for the home side and fell to Ray Winters. With a lot to do and back to goal, Winters made light work of it. His pirouette left his marker bamboozled and the subsequent effort was smashed into the top corner of the net in typical Winters fashion. His goals tend to be decisive and none more so than this goal of the season contender. That booked Dublin Hospitals a place in the Lanigan Cup quarter-finals.

With promotion to the Major 1A division still possible, a head-to-head with fellow hopefuls Rosemount Mulvey could not have come at a worse time for DHFC. There was an overhaul of the side from the Crumlin game. The doctors arrived with depleted numbers for this fixture. Although squad size has varied this season, individual quality has not. DHFC can count themselves lucky to have the amount of top quality talent at their disposal. In a cagey affair, with both sides seemingly keeping one eye on their respective cup quarter-finals, a classic David Gildea second-half finish was enough to secure an away point against one of the league’s top sides. The centre-back pairing of Colm Cosgrove and Ray Winters has been a successful one this season. Both men ooze composure and Winters put in another player of the match performance to keep the scores at one a piece. Unfortunately, the stalemate quelled any hopes for promotion to the higher echelons of the LSL. Full focus turned to the exciting Lanigan Cup run, where DHFC was given another away draw against league rivals Leixlip United.

DHFC ventured outside the county for the Lanigan Cup quarter-final. On a hot Saturday afternoon, the medics faced a side in the ascendency in the league, who had inflicted a heavy defeat on them earlier in the season. However, this team has a remarkable ability to learn and they had Leixlip figured out on this occasion. The experienced centre-back pairing of Cosgrove and Delany marshalled Leixlip’s centre-forward from the first whistle. DHFC raced to an early two-goal lead. The first was another goal of the season contender courtesy of the left boot of John Cosgrove. After his inswinging corner was cleared, Kennedy swept a searching volley to the feet of Cosgrove, at the edge of the 18-yard box. Cosgrove unleashed an unstoppable drive into the far top corner. Right into the stanchion of the goal. It was indeed Cosgrove who was then on hand to supply the ammunition, which led to Pennycook’s second goal. Some Sheerin-sharp movement off the ball and a crisp delivery left Pennycook one-versus-one with the Leixlip goalkeeper and there was never any doubt about the outcome. The second-half was an extremely tense affair. Despite controlling the game, a consolation goal for Leixlip led to a nervy last few minutes, but DHFC stood firm. Into the club’s first ever Lanigan Cup semi-final, Dublin Hospitals were drawn against Rush Athletic with another away fixture.

What a season it has been for Dublin Hospitals. In the last 12 months the club has gone from narrowly avoiding relegation to missing out on promotion at the death. There were strong performances and results in the FAI and Leinster FA cups and although the trophy cabinet has no new additions, the level of football has been high.

The Lanigan Cup run ended in the semi-final against Rush Athletic. The score reflects the clinical nature of the Rush front three rather than a gap in quality. John O’Grady scored his first goal of the season on the final day of the season. A commanding header from a Cosgrove corner-kick was too powerful for the Rush goalkeeper to keep out. Having opened the game with two quickfire goals the Northside club’s advantage was halved, but that is as good as it got for the medics. The second-half started with optimism, but soon DHFC had conceded another rapid double. David Gildea, as he has done time and again this season, found the back of the net after a jinking run. Having changed tactics, sending Colm Kirby into attack in an attempt to keep hopes alive, Dublin Hospitals were short-handed at the back and eventually conceded a fifth and sixth via the penalty spot. Suffice to say it was a disappointing day, but this team will hold its head high when they reflect on the season as a whole.

PS. Dublin Hospitals FC would like to thank our kind sponsors Medisec Ireland for continuing to support the club for the past year. You can keep up to date with all things DHFC at www.dublinhospitalsfc.com.