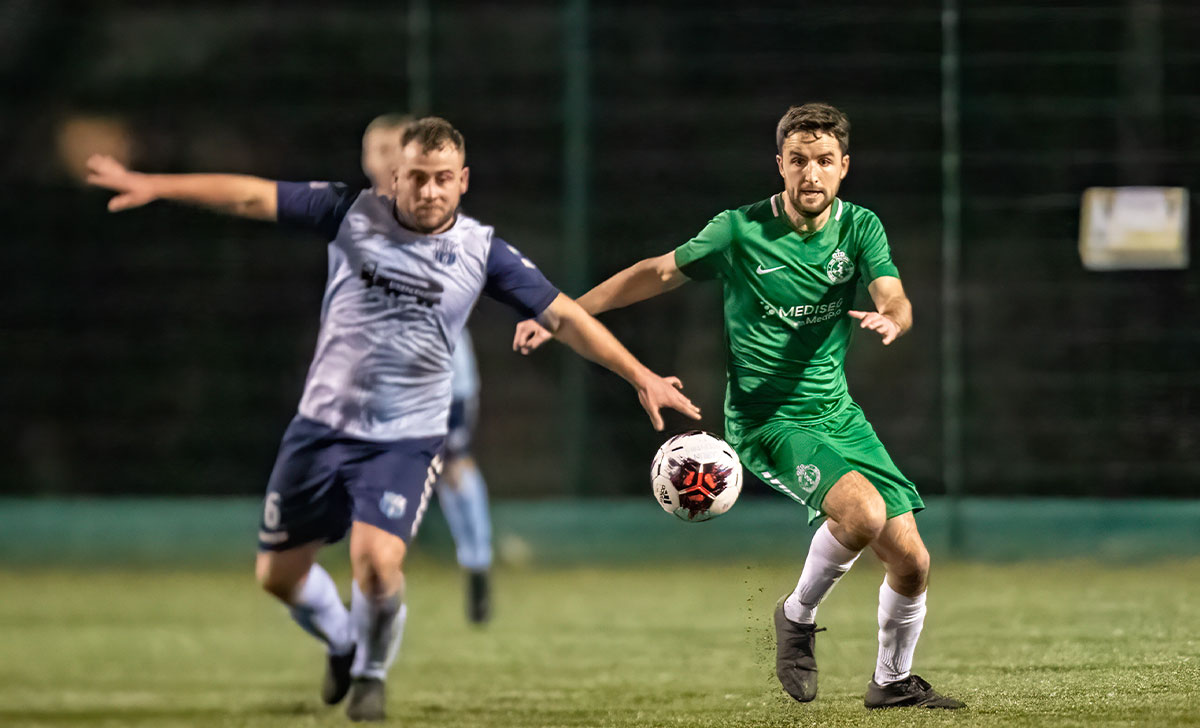 David Gildea has been relentless in front of goal this season. His second against Dunboyne is a must see on the match highlights at www.dublinhospitalsfc.com

Dublin Hospitals Football Club’s (DHFC) return to form following the Christmas break, sees the doctors well seated for a dramatic late drive for promotion. Five league games and one cup game have DHFC in the running with four league games left to play. The match highlights are available to view on www.dublinhospitalsfc.com.

On a blustery day in Crumlin, DHFC were guilty of another slow start. An early long ball caught in the wind allowing Dunboyne to take the lead in the opening minutes of the game. After the early setback, it was one-way traffic in favour of DHFC with Gaffney, Daly, and Wrynn in particular causing all kinds of trouble for the opposition. It was full-back Barra Neary who opened the scoring for the medics, following some neat play down the left flank. Neary sent a teasing cross shot into the Dunboyne area, which evaded the outreaching hands of the goalkeeper and found the bottom corner. That was Neary’s first of the season and just reward for a string of solid performances of late from the gastroenterology registrar. Substitute David Gildea then doubled the scoring for DHFC. The industrious Ian Daly burst into the Dunboyne penalty area, only to see his low drive parried into the path of Gildea, who made no mistake from six yards. Gildea doubled his own tally with a delightful finish early in the second-half. This was a goal of the highest quality. Daly again won possession on the halfway line. GP Daly’s perfectly weighted through pass left Gildea one-on-one against the Dunboyne centre-back. The unfortunate defender was left bamboozled by the footwork of Gildea, who smashed home from close range. A goal definitely worth the watch on the highlights reel. With the score 3-1 and the medics in cruise control, Ian Daly completed the rout. Player of the match Eddie Wrynn continued his bombardment of the Dunboyne backline and his pull-back found Daly on the edge of the box and his powerful effort crashed in off the underside of the crossbar. It was a well-deserved 4-1 victory for the Hospitals.

With two wins from two in the post-Christmas games, DHFC travelled to Leixlip for a game that the medics will want to forget. This Leixlip side are one of the in-form teams in the league and will be cursing their early season form. Based on this performance, they could well have been in the run for a top three finish. A combination of intelligent midfield players and an abundance of pace and strength in the frontline caused the doctors continuous problems, in particular in dealing with the long diagonal balls to the left-wing. The first-half ended with Leixlip 1-0 to the good. DHFC rallied early in the second-half, creating a number of chances, but were caught on the counterattack to go two down. In the dying minutes, whilst chasing the game, DHFC conceded a third from the penalty spot and the game finished 3-0. Despite the result, the effort and work rate could not be faulted. We go again, as they say.

Following a humbling 3-0 defeat in Leixlip, DHFC welcomed Skerries Town to Crumlin. To put the game into context, Skerries have been the runaway league leaders and required just a point in this fixture to secure the league title. The last time these sides met, Skerries put DHFC to the sword convincingly with a 5-0 win. Clearly Durand and Cosgrove had analysed that performance and prepared the troops. Eoghan Daly, currently in Res year at UCD, made his first start for the club and put in a player of the match performance. Rheumatologist Colm Kirby repeatedly outmuscled the Skerries target man who had caused so much danger in the away fixture and the wily Colm Cosgrove was continuously alert to danger. Again, David Gildea found the net with a clinical finish in the first-half as DHFC dominated proceedings. As the second-half started the medics continued to take the game to the champions elect and it was a trademark John Cosgrove long distance effort that doubled the lead for the Hospitals. A consolation goal for Skerries was not enough to earn them the title, but over the course of the season they have been good value for the position that they find themselves in and hopefully DHFC will see them in the Major 1 division next season.

With some good league form, despite an unfortunate series of injuries to key players, DHFC took on St Paul’s Artane in the last 32 of the Lanigan Cup. In a physical affair, it was the medics who came off best in a convincing 3-2 win. David Gildea, who can’t seem to stop scoring at the moment, opened DHFC’s account on the day. Gildea’s record in front of goal is remarkable and this took him to nine goals in just 10 starts in all competitions this season. Suffice to say, the ophthalmology registrar has an eye for goal. St Paul’s had arrived in Crumlin prepared for a battle and took the game to the medics. Their physical approach and long ball tactics were met with resolute defending from DHFC. With Andy Delany and Ian Daly leading the charge, the Northsiders were met with a zero-tolerance policy and any efforts to breach the DHFC defence was strongly resisted. It was Ian Daly who made it two for the medics, with a clinical finish after some neat play down the left-wing. With 20 minutes remaining, Durand completed the scoring for DHFC with an outside of the boot swerving effort from 25 yards. At three goals to the good, this should have been plain sailing for the Hospitals; however, instead of doing things the easy way, two fortuitous goals from St Paul’s in the dying minutes meant DHFC had to hold on for a 3-2 win. They all count, especially in the cup, and a mouth-watering tie against Crumlin United is next on the cards in the last 16 for the team.

Having comfortably defeated Killester Donnycarney in the reverse fixture only a few weeks previously, DHFC hosted the Northside outfit at Pearse Park, with a completely changed team. It also seemed that Killester arrived with a number of reinforcements compared to the previous game. It was the team from Killester that opened the scoring in bizarre circumstances. With only 10 players on the pitch and the DHFC goalkeeper not yet between the posts, the referee blew the whistle to kick-off. Killester duly responded with a direct from the kick-off halfway line effort into an empty goal to open the scoring. Less than three seconds, surely a record for the quickest goal scored in league history! That set the tone for the first-half, with the stunned medics spending long periods chasing, harrying, closing down, and working their way into the game. Time and again, Dublin Hospitals have called upon their ‘never say die’ attitude this season and somehow managed to keep themselves in games when the going gets tough. When teams pull together like this, all it takes is a moment of inspiration from a talented individual. Eddie Wrynn was that man. Like a Speedy Gonzalez cartoon, the difference in pace between Wrynn and other players is laughable at times. Midway through the second-half, with the Hospitals losing 2-0, someone fired up the afterburners and brought the game to life. Driven on by Daly, Wrynn began to work his magic and laid off Durand and Nally for simple tap-ins to finish the game at 2-2. DHFC even had chances to win the game in the dying minutes, but it wasn’t to be and a draw was probably a fair result in the end.

With the Leinster Senior League season approaching its finale, DHFC travelled north to Finglas, where they met one of their fellow promotion hopefuls, Finglas United. On a glorious spring afternoon, it was the home team who started brighter, controlling possession as the Hospitals took some time to get to grips with the Finglas wing-back system. It was the medics who opened the scoring midway through the first-half. After a period of relentless closing down, the Finglas goalkeeper, under immense pressure from Durand and Ward, flapped at a clearance, leaving Durand with an unmissable opportunity.

Finglas levelled the scoreline with a well worked move midway through the second-half. DHFC grew into the game as the half wore on. Some positive play resulted in a corner for the Hospitals. A clearance fell to Kennedy at the edge of the box, who volleyed to Cosgrove, who was still on the right wing having taken the corner kick. He unleashed a curled left-footed effort that found the net via the far top stanchion of the goal to make it 2-1 just before half-time.

That makes it 12 for the season for Cosgrove and another goal of the season contender. With UCD having beaten Rosemount in the earlier fixture, this game had turned into a huge opportunity for Finglas or DHFC to take a step towards third place. However, it ultimately led to a cagey second-half. Cian Ward, who had worked hard to pressurise the Finglas defence throughout the game, managed to jink past his marker on 70 minutes and sent a teasing delivery across the Finglas six-yard line.

It found Durand, who scored his second of the day, making it four goals from three games for the St James’s cardiology registrar. With the score at 3-1, it looked to be enough to secure another win for the Hospitals. However, two penalties awarded to the home team, including one deep in the depths of injury time resulted in a 3-3 draw. An opportunity missed perhaps, but a result that saw Dublin Hospitals, Rosemount, and Finglas all in the running for promotion, with four games to play.

PS: Dublin Hospitals FC would like to thank our kind sponsors Medisec Ireland for continuing to support the club for the past year. You can keep up to date with all things DHFC at www.dublinhospitalsfc.com.